The 16:9 display works well for watching video and, speaking of that, it’s great to view a screen without a notch. 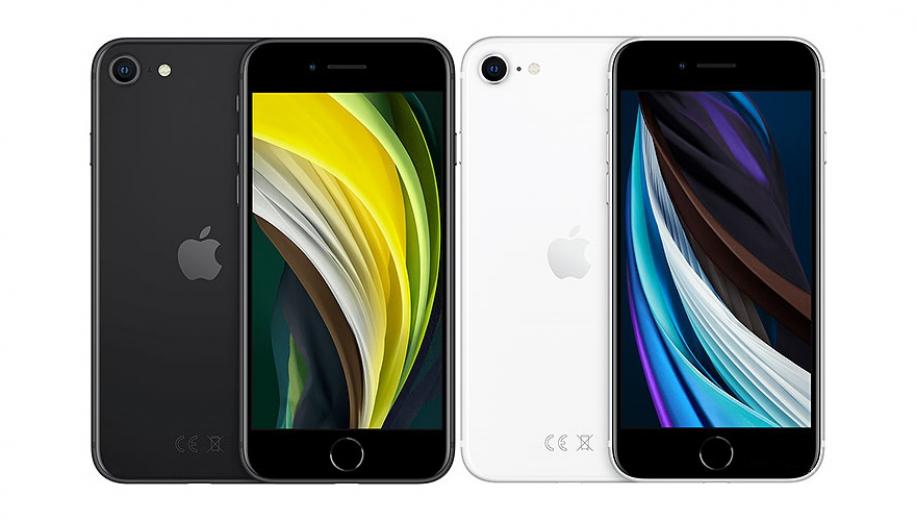 What is the Apple iPhone SE?

This phone is the very definition of déjà vu. At a glance, it’s nearly identical to the iPhone 8, released in September 2017. But inside, though much of the hardware is the same, it’s powered by the latest iPhone chip, the A13 Bionic, also found  in the current flagship phones, iPhone 11, iPhone 11 Pro and iPhone 11 Pro Plus.

This is the fastest chip you can find in any phone, not just Apple’s. It means that though the rest of the hardware is old, the experience is transformed at every level.

The new phone is the smallest in Apple’s range, with a 4.7in display and a single rear camera, a Touch ID sensor to unlock the screen and to pay for purchases through Apple Pay.

The other key fact about the iPhone SE is its price. It is almost the lowest debut price any iPhone has ever had. It costs £419 and the only phone that was cheaper was the original iPhone SE, which cost £359 when it was released in 2016.

Despite the price rise, it is arguably the most affordable, and certainly best-value, iPhone yet.

Well, not quite, but almost. Just as the original iPhone SE took a familiar design, in that case the iPhone 5s, and embedded a much newer processor inside, so Apple has done the same here, taking the Apple iPhone 8 casing with a new processor inside.

It’s exactly identical in terms of size and weight, but it comes in different colours. This time it’s white, black and PRODUCT(RED), the last of which means Apple gives a portion of the proceeds to the Global Fund’s newly established COVID-19 Response as well as HIV/AIDS grants. The phones have glass backs, so they’re very shiny and they are capable of wireless charging. Just in case you don’t remember which one the iPhone 8 was, it launched in 2017, and was the last Touch ID phone. Its design was gently updated from the iPhone 6, iPhone 6s and iPhone 7 which preceded it, though it was the first with a glass back.

Where the iPhone SE from 2016 now feels surprisingly Lilliputian, the current model feels like a phone that could suit anyone

That back sees the second design change, beyond the colours. In line with the latest iPhone 11 series, Apple has moved the logo downwards to it’s more central. Which means that if you have an iPhone 8 case it’ll definitely fit, but if it’s one where there’s a cut-out to reveal the Apple icon, that won’t be in quite the right place any more.

There’s only one other way the new iPhone SE looks different and that’s the bezel that frames the display. On white, silver, gold and rose gold iPhones until 2017, the bezel was always white, while on dark-hued iPhones the frame was black. Now, it’s black on every colour.

The frame is much bigger than on any other current iPhone. That’s because the iPhone XR, 11, 11 Pro and 11 Pro Max have all-screen fronts, with only a notch at the top where the Face ID camera for facial recognition is positioned.

Here, there are big non-screen areas at top and bottom, in a way that doesn’t look as cutting-edge. The top area, the forehead, is taken up with the front-facing camera, while the chin is dominated by the Touch ID Home button.

If you’ve been using a Face ID iPhone, going back to the fingerprint sensor is a bit of a change, but it’s an entirely pleasant one. The gentle haptic feedback when you press the button, for a start. You can adjust the feedback to your taste, but it really does feel like the button is moving even though it’s not.

Then there’s the fact that, fast though Face ID is, this feels faster. And, an extra side-benefit, you can unlock your iPhone SE under the table in a boring meeting without it needing to see your face, which can be more discreet.

This is the fastest chip you can find in any phone, not just Apple’s

The Touch ID sensor is also the Home button and it uses the same operating procedure all iPhones before the iPhone X did. So, launching Control Centre is done by swiping up on the display, not down, for instance. Both systems are fine, but swapping between the two can take a little time to get used to.

The glass on the iPhone SE is slightly pillowed, the aluminium edge is curved and so is the back. So, the iPhone feels good in the hand, especially in smaller hands. Where the iPhone SE from 2016 now feels surprisingly Lilliputian, the current model feels like a phone that could suit anyone: a reasonably-sized screen in a curvy, hand-friendly case. Its IP67 water-resistance means it can lie in a metre of water for 30 minutes.

Unlike the latest iPhones with their beautifully curved display corners, matching the shape of the phone around them, here the screen has sharp, rectangular corners. The 16:9 display works well for watching video and, speaking of that, it’s great to view a screen without a notch. The display here is what Apple calls Retina HD, meaning it has neat features like True Tone. This adjusts the white balance according to the colour temperature of your environment, so everything looks as it’s supposed to colour-wise.

This is separate from Night Shift, where the display turns the colours to the warm end of the spectrum when darkness falls. It’s supposed to mean less blue light bathing your eyes and so could help you sleep. Even if it doesn’t, it makes things look cosy and reassuring. You can turn both these features off, of course.

Though these elements are common to the most high-end iPhones, this display isn’t the most advanced. For a start, it’s not OLED, but LCD. Apple has used LCD for decades now and is pretty proficient with it.

But the resolution is no match for the latest smartphones, measuring just 326 pixels per inch, with a total resolution of 1,334 x 750. Even so, with a screen this small, it’s more than acceptable.

For statistics fans, the maximum brightness is 625 nits and the contrast is 1,400:1.

Overall, this is a decent display and video playback is smooth and attractive. Compare it to a high-end smartphone and you can see the difference, of course, but those phones cost much more.

The price, really, is the thing to keep in mind all the time with the iPhone SE. It’s very strong value.

The other thing to keep front-of-mind is the processor. It really is super-fast, meaning not only simple things like launching apps and scrolling through lists is fast and responsive, but more advanced aspects, like shooting video in 4K, editing your videos on the phone, playing the most demanding games and so on, all these happen at speed, too. Just as importantly, it means that as more advanced games and apps become available in the coming years, there’s plenty of headroom so the phone will continue to be a real performer.

And how many years, you may ask? Well, Apple has consistently supported its phones for longer than Android, for instance. Currently, phones stretching back to 2015 are supported, so it’s likely the iPhone SE will have access to the latest software for a long time to come.

Apple says this is the best single-camera system in an iPhone. It’s worth remembering that Apple released an iPhone XR in 2018, a year after the iPhone 8, with a single rear camera.

So, it’s a mark of the power of the A13 Bionic processor that it can take a 12-megapixel sensor from 2017 and make it more potent than one on a phone released a year later, which is still on sale and costs more (£210 more, to be exact, as it sells for £629).

Low light isn’t a friend to this camera, which is not uncommon

Of course, the iPhone XR has a bigger screen which covers the front of the phone, a bigger battery and Face ID, which may be enough to persuade you to choose it, but Apple says that camera isn’t as good, or at least that this one is better.

This is what some Apple execs like to refer to as the age of computational photography, where the camera’s lens and sensor work with silicon and algorithms to create better photographs.

Here, Apple has introduced machine learning, similar to on the iPhone 11, which has a striking effect. The processor can, at super speed, analyse every aspect of the picture you’ve just taken and work out whether it’s skin or hair, landscape or still life. It can then manipulate details to make them look their best.

It also has Portrait mode, creating a bokeh effect where your subject is in pin-sharp focus and the background blurred. Most phones that do this have two cameras, but the SE and the XR are the only iPhones that do it with a single lens. Some other phone manufacturers have done this with single-camera phones, too, notably Google’s Pixel series.

Apple has introduced machine learning, similar to on the iPhone 11, which has a striking effect.

There’s one omission compared to Apple’s two-camera phones: it only lets you take portraits of people, not animals or objects.

The fact that this phone takes excellent photos is down to Apple’s engineers and their outstanding good taste: poor taste in such things leads to terrible photos.

Low light isn’t a friend to this camera, which is not uncommon, but doable and in almost every other situation, the iPhone SE camera excels. Of course, you’re limited in terms of zoom. Where a multi-lens phone can offer the equivalent of optical zoom, here it’s digital all the way. For most people, the camera will be more than effective enough.

The battery is the same size as on the iPhone 8, and is noticeably smaller than on the other current iPhones. Although it doesn’t match the exceptional battery life of the iPhone 11 and 11 Pro, there is enough power to get you through a day, though perhaps not much more. As mentioned, this is a wireless-chargeable phone, if you have the right charging pad. It’s also fast-chargeable, though the box contains the basic 5W Apple charging plug rather than anything more punchy.

Compared to the original, and massively popular, iPhone SE this is a big step forward. It’s actually a pretty big leap from the iPhone 8, too. The value of the phone is down to the fact that the latest Apple smartphone processor is included in it.

Sure, the screen is smaller than on the most advanced flagships, but that means the phone fits more hands more easily than larger phones. Let’s remember that the iPhone SE is £630 cheaper than the iPhone 11 Pro, with the same storage capacity (64GB) and processor. That’s a pretty striking price difference. The camera is great, though not quite flagship-quality. The battery life is good, but not as epic as some. However, the performance is tremendous, and equals that of the most advanced flagship, no contest.

If a phone with the very latest features in terms of facial recognition, multiple cameras and so on, isn’t what you need, well, first of all, you’re not alone and secondly, in that case, this is a great choice.

The iPhone SE is powerful, stylish, enjoyable to use and astonishingly good value.