Altogether, the extra camera, Dolby Vision and the LiDAR scanner combine to make an exceptional cameraphone. 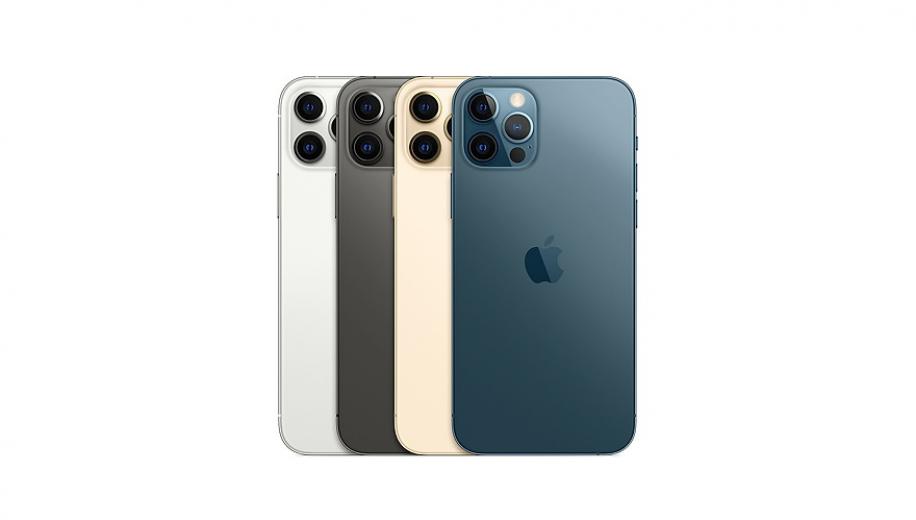 What is the Apple iPhone 12 Pro?

This is the most advanced iPhone yet, announced on the same day as the other phones that make up the latest tranche of phones from Apple; iPhone 12, iPhone 12 mini and iPhone 12 Pro Max. Of these three, the iPhone 12 is on sale from Friday 23 October, alongside this phone, and the other two follow in November.

The Pro Max, by the way, is likely to be more advanced than even this phone, thanks to a better camera set-up.

For now, though, the iPhone 12 Pro is very similar to the iPhone 12, which offers a stylish new design, faster processor, tougher screen protection and 5G connectivity. The Pro version takes every single feature of the 12 and adds an extra camera, a brighter display and better video recording. Apple hasn’t confirmed this but it’s believed the Pro model has extra RAM to keep everything moving smoothly.

Many manufacturers save their best processor for the priciest phone, putting a less potent chip in cheaper models. Not Apple: the A14 Bionic is in all the new iPhones so whichever you choose you’re guaranteed just as fast performance.

Here’s how the iPhone 12 Pro fares.

The new design sees the edges, display and back surface, all of which were clearly rounded on last year’s iPhones, flattened and straightened, like an enlarged and highly updated iPhone 5. The new design is still a good fit in the hand and the flat edges are comfortable.

If you sneak your viewpoint round to the edge, then differences emerge. The iPhone 12 Pro antenna band is stainless steel, colour-matched to the back of the phone. That’s different from the iPhone 12 which has a matte-finish aluminium antenna band. The band on the 12 Pro gleams.

The colours are different here, too: silver, gold, graphite (replacing the conventional space grey) and the new Pacific Blue.

... still a good fit in the hand and the flat edges are comfortable

Where the iPhone 12 rear casing is glossy, on this phone it’s matte, so the colours are much more subtle. The Pacific Blue can look like grey or distinctly luminous-blue depending on the light that falls on it.

The rear of the phone is entirely blank, devoid of any markings besides the camera panel that sits on the top left, and the Apple logo – also colour-matched to the rest of the phone’s back. There’s nothing else at all, giving a clean, pure design.

There’s also compatibility with MagSafe, a wireless charging system which clamps precisely to the iPhone thanks to cunningly positioned magnets in both the phone and the optional MagSafe wireless charging pad.

Overall, the iPhone 12 Pro has a striking, attractive look that’s different from other smartphones on the market right now.

The iPhone 11 Pro is almost exactly the same size as this new phone but Apple has managed to get a bigger screen in this time – the flat sides have saved some space compared to last year’s curvy ones – so last year’s 5.8in screen is now updated to this year’s 6.1in version. Last year and this, the display is OLED.

It’s like the iPhone 11 Pro screen in that it has a notch at the top where the advanced camera that makes Face ID, the facial recognition system work. It’s also an Apple speciality and tells anyone glancing at the phone that it’s an iPhone.

The Face ID system is secure, effective and fast, earning its place in the top of the display. It’s secure enough to enable purchases when you use Apple Pay, something no other manufacturer has been able to equal.

The iPhone 12 and iPhone 12 Pro have identical case sizes and screen sizes, but there is one difference between the displays: the typical maximum brightness on the Pro is 800 nits, against 625 nits on the iPhone 12.

That’s not the maximum brightness on either display, mind, as both can be pushed up to 1200 nits for HDR10 and Dolby Vision content, whether that’s videos and photos

The iPhone 12 screen, by the way, was a big step up on the iPhone 11, as previous entry-level iPhones including the 11 have all had lower-resolution LCD displays. The 12 Pro has had less of an upgrade screen-wise, compared to the 11 Pro, but is still improved.

The display is covered by an entirely flat glass panel, something Apple calls Ceramic Shield and which has so many ceramic nano-crystals in it, we’re told, that it’s not strictly speaking glass.

Whatever name you give it, the point of it is that it’s much tougher than before, four times better at surviving a drop than previous iPhones. This is a feature that will appeal to a lot of people.

This is a screen that is HDR compatible, with native support for Dolby Vision, HDR10 and HLG. This is primarily for content from Apple TV+, rentals or purchases from iTunes but also from other sources. We’ll come back to HDR with the camera.

The photographic element is the way the iPhone 12 Pro sets itself apart from the iPhone 12. The two main cameras, wide and ultra-wide, are identical on the two phones, and are both proficient. A new lens complex means the f/1.6 aperture is the fastest yet on an iPhone, delivering stronger low light performance (27 percent better, Apple says, for what that’s worth).

The ultra-wide has a 120-degree view. The different focal lengths mean the wide camera is the equivalent of 2x optical zoom of the ultra-wide.

The third camera, only on the Pro, is a telephoto lens that’s the equivalent of 2x the zoom of the wide, meaning the three lenses between them give a 4x zoom capability.

The key thing about Apple’s cameras are their completely simple, intuitive use. Apple makes decisions for you. Many people have an instinctive resistance to image-processing, and there’s plenty of that in the iPhone’s photography.

But what makes it work is the sublime good taste of Apple’s photographic engineers who have a gift for getting things just right. Of course, if it’s not to your taste, there are other apps available on the iPhone which offer more features and more control.

But there’s one more thing coming to the iPhone 12 Pro this year, which will not be on the iPhone 12: Apple ProRAW. It aims to make Raw photography possible in the native Camera app for the first time, but add what Apple calls computational photography which is the machine learning extras it builds into every photo.

These include Smart HDR and Deep Fusion, the latter of which is about taking photos in low- and medium-light and improving the detail, texture and clarity of the pictures.

If Apple can seamlessly introduce a Raw capability, this could be something special. Of course, I haven’t been able to test this but it’s a promising possibility.

... what makes it work is the sublime good taste of Apple’s photographic engineers

Ah yes, HDR, thanks for the reminder. Apple’s iPhones have been exceptional for video recording for several years now, and the iPhone 12 phones offer a unique extra: HDR recording with Dolby Vision. Of course, it’s all done automatically when you choose to record at 4K resolution. The iPhone 12 does this at 30 frames per second, but this phone goes further, managing 60 frames per second.

What’s more, you can edit the Dolby Vision videos on the iPhone in exactly the same way as you would any other video, in the Photos app.

There’s also a time-lapse video system using Night mode, so that it looks bright and smooth even with longer exposure frames. Apple’s Night mode has been consistently excellent for years, but the addition of Night mode video is intriguing and, so far, looks great.

Note that the iPhone 12 Pro Max, coming soon, has a bigger zoom on the telephoto lens and a bigger sensor on the wide camera.

One last thing, the Pro also has a LiDAR scanner, a clever extra that is great for augmented reality apps but also means the phone can grab depth information super-fast, adding to the iPhone’s ability to focus fast in even low light conditions.

Altogether, the extra camera, Dolby Vision and the LiDAR scanner combine to make an exceptional cameraphone.

The super-speedy A14 Bionic processor is common to all the new iPhones, and the iPad Air that’s also just going on sale. It’s undeniably fast. Apple says it’s faster than any other smartphone – though the just-announced Huawei Mate 40 Pro may challenge this in coming weeks.

In use, it’s a slick, fast phone that never keeps you waiting, whatever you’re doing. The extra RAM means that the features the iPhone 12 lacks can still take on the extra tasks of the third camera, for instance, and still perform at speed.

When there are more advanced apps and games, it’s possible that the iPhone 12 Pro may slow down, but the truth is that this eventuality was predicted a year ago for the iPhone 11 and it never happened. In fact, in some measurements, the A13 Bionic chip from the iPhone 11 has still not been outgunned.

... it’s a slick, fast phone that never keeps you waiting, whatever you’re doing

Assuming Apple has got things right this year – and the early indications are good – the new chip will likely excel this time as well.

Battery life is good. Truth is, last year’s iPhone 11 set the bar very high, way higher than previous iPhones, and there’s certainly not the same leap forward this year. But there didn’t need to be, just a matching of the previous iPhone’s capabilities and that’s been achieved, despite the extra demand 5G makes on any battery.

Apple has a system which automatically dials down the demand for 5G when you’re doing things that don’t need the fastest connection. Even so, if you live in an area into which 5G has not yet penetrated, you could always turn it off.

Overall, though, this is a phone with enough battery to see you through a day with no anxiety about running flat.

If you’re not that bothered about photography, you’ll probably go for the cheaper but still highly capable iPhone 12. If you’re mad about taking photos, you’ll wait for the iPhone 12 Pro Max with its extra advantages. So, where does that leave the iPhone 12 Pro?

The Apple iPhone 12 Pro is ultimately very successful. It’s the best balance between capability and price, offering that tempting extra camera and better Dolby Vision, and a demure matte-finish instead of the gaudier gloss case the iPhone 12 boasts.

It’s certainly more expensive than the iPhone 12 (that starts at £799 while this costs £999 and up) but while the 12 is an amazingly accomplished phone, this offers enough extra power to make it worthwhile.