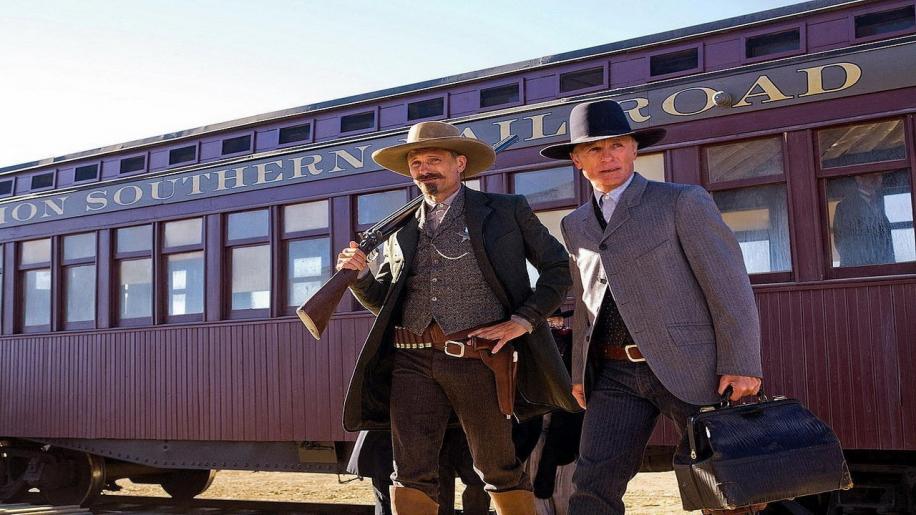 Westerns are certainly not to everybody's tastes. Perhaps it's that old cowboys and Indians image that has put off many viewers over the years - a stereotyped old-style Western with little depth or resonance. Even the Clint Eastwood era of Westerns had its ups and downs and, as with breaking into any genre for the first time, if you pick the wrong movie to ride with, you might be put off for life. John Wayne would have done that to me, had I not invested the time in Sergio Leone's incrementally good Dollars trilogy. But a few recent Westerns have taken things to another level - possibly starting with the biggest 'anti-Western', Unforgiven. The depth present here, the character development, it was all amazing, and led to a couple of great Robert Duvall Westerns - Open Range and Broken Trail - to further add to his earlier Lonesome Dove offering, as well as the tremendous Deadwood TV series. Amidst these modern classic Westerns, there are plenty of contenders, including the likes of Seraphim Falls, 3:10 to Yuma and Wyatt Earp, but these examples don't tend to quite be capable of going that extra mile, having that extra layer that truly pulls the movie out of its genre to becoming an all-time classic. Pick the right Western, and whatever your previous preferences, you could find yourself interested in a whole new genre. Which begs the question, is Appaloosa a contender or a champion?

The set-up is simple, and will appear familiar to anybody who knows the genre - a small town policed inadequately by feeble sheriffs, and truly run by some rich but nasty man who practically has his own army. Enter some hired gun(s), who are commissioned to return law to the scared townsfolk. Cue confrontations aplenty as the (often vastly) outnumbered lawmen try and survive against the might of their despicable opponent. This was the underlying narrative behind many of the above-mentioned Westerns, and many that came before it, and does not stop some from being great, whilst others remain merely entertaining movies. Appaloosa sees Ed Harris's hired gun Virgil Cole and his right-hand man, Everett Hitch (Viggo Mortensen) ride into such a lawless town and offer up their services to sort the place out and put an end to the reign of Jeremy Iron's dictatorial rancher, Randall Bragg, who also happens to be a dab hand with a rifle. Taking a stern, 'I AM the law' Judge Dredd approach, Virgil suffers no fools and refuses to back down when faced with Braggs' threats. But after Bragg is accused of murder and brought in for trial, a chain of events is set into motion that leads the duo across the plains in search of justice.

Appaloosa has all the markings of a modern-day classic - beautifully captured open ranges, tense confrontations, gunfights with serious ramifications, and plenty of quiet, contemplative moments - but it does not quite hit the mark. Shot competently by Ed Harris (who previously directed himself in the starkly different Pollock), it is definitely a solid effort, with superior performances from himself and Viggo Mortensen, another nice villainous turn by Jeremy Irons, some unusually realistic gunfights and some original (if not altogether suitable) narrative developments.

The movie suffers a little, however, at the hand of Renee Zellweger, who really ruins things as the key female character in the dynamic. This now odd-looking actress (either it is heavy makeup or she has aged significantly over the last few years) was perfect as Bridget Jones and showed some range in the superior Cold Mountain, but really irritates here - although part of this is due to the annoying traits of the character herself. Essential to the original story, she was designed to provide a fresh look at a women in the Wild West - neither the standard prim-and-proper wife, nor the kind-hearted whore, she is actually very modern in her attitude. Unfortunately, whilst I can't deny that this is a novel approach, it does not quite work with the rest of the story, and some of that blame has to lie with Zellweger, who never gives us any reason to even vaguely tolerate her character even if it is impossible to actually like her (thinking back to Isela Vega in the Sam Peckinpah-directed Warren Oates-starring Bring Me the Head of Alfredo Garcia, you can see how this kind of role can be injected with some affection and interest if characterised by the actress in the right way).

It is an integral part of the story structure, and whilst Harris and Mortensen try their best to work their way around the contrivances, the end result is slightly disjointed and not quite the perfect modern Western we hoped for. On the plus side - and in the same vein as the great Open Range - the gunfights are largely superb, with a genuine sense that anybody could get shot, that accuracy really does matter and that being fast only gives you a slight edge (not your Clint Eastwood-style take out six people in the blink of an eye approach). At one point one of the characters remarks that the gunfight was over quick, the other saying that that was because all of the men involved could shoot. Which pretty-much sums the standoffs up - to the point and authentic in feel and approach.

The cast is also a massive plus. I have a lot of time for Ed Harris, ever since his early stoic performance in The Abyss (I say early, but he started his career quite late towards the end of his thirties) all the way through his powerhouse cameo in The Firm, his solid supporting role in The Rock to his darker turn in A History of Violence. He is ably backed up by Mortensen, who also came into the limelight in his latter years (his forties actually, with Lord of the Rings, and he is only 8 years younger than Harris), and Brit veteran Jeremy Irons (Damage, Die Hard with a Vengeance). Irons' character is suitably evasive and subtly omnipotent, marking a nice return to form for the actor, although one climactic scene is markedly at odds with the opening salvo he offers. There are a couple of other familiar faces on board for cameos, including Timothy Spall (who appears to only exist in an alternate time-period since he only seems to do period pieces) and Lance 'Aliens' Henriksen, utterly wasted and sporting a terrible little Mexican 'tache.

Although far from perfect, and yes, perhaps it will not convince stubborn anti-Western viewers from exploring the genre, those whose eyes have already been opened by the likes of Open Range and Unforgiven will still want to explore the solid offering that is Appaloosa, as it almost fits the bill as a modern classic Western. Of course, if you love Westerns then watching this is a no-brainer as it is clearly one of the better ones on offer over the last decade. Recommended.