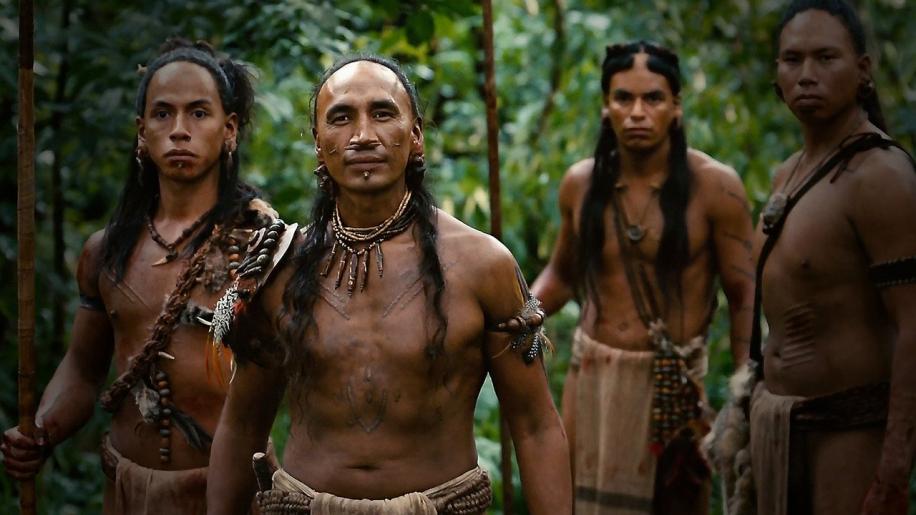 Mel Gibson has had quite a tough time of it recently. Sure, much of it was his own drunken doing, but it is a shame that it has had so much of an effect on his credibility as an actor and filmmaker. Cruise may jump up and down on sofas, but he's still seldom less than entertaining in his movies, and by the same rational I find it inappropriate (but understandable) that Gibson be judged for his conduct off-set. At arguably a fairly young age to be dropping out of leading roles (especially when compared with the likes of Eastwood), I sometimes wished that he mixed-and-matched a bit more with his movies, perhaps at least starring in a few of them as well as directing them (like he did with Braveheart). That said, he appears to be quite a capable director, with The Passion of the Christ being a documentary-like telling of one of the greatest stories of all time. Now we get another unusual epic journey, the tale of a long-lost cultures - the Mayans. Here comes Apocalypto.

On the twilight of their self-destruction, we find ourselves in the thick of things with a small Mayan village, whose close-knit unit is torn apart by a temple-building, land-plundering Mayan tribe, who believe that the only way to save themselves from a plague ravaging their animals and their own, is sacrifice. Human sacrifice. Jaguar Paw is the starry-eyed son of one of the Mayan village leaders, and when he is taken away from his pregnant wife and young son, his battle against his oppressors becomes a very personal one indeed.

Apocalypto kicks off as a beautiful, well-observed portrait of a dying culture. I don't think I've ever seen a movie about Mayans, or anything even comparable, so the setting is instantly captivating. But Gibson does not make it inaccessible - quite the opposite - playing out the first act as if it were a Mayan-set soap, with plenty of pranks played amongst the townsfolk (some not unlike what you would expect from Gibson himself on-set, if the documentaries about his movies are anything to go by). The horrors that unfold are often hard to endure purely because you have gotten to know these characters at the outset, and Gibson paints a wonderful, brutal portrait of this civilisation that seems determined to destroy itself.

Unfortunately - and though it does not ruin the movie - the story eventually degenerates into a cross between Rambo and any one of Gibson's own classic revenge movies(like Mad Max, Payback and even more obviously, The Patriot), where the hunted becomes the hunter and fights back against overwhelming numbers. It is both one of the most visceral, exhilarating aspects of the movie, and also one of the most unoriginal. The hunt, the waterfall, it was all a bit Last of the Mohicans. Still, some might say that that is only a good thing, a plus point. And it certainly makes them movie more exciting, never allowing you to feel the movie's near two-and-a-half-hour runtime.

Acting-wise (and occasionally camera-shot-wise, particularly with the action scenes) this movie betrays its pseudo-indie roots, with a near-unknown cast of fresh hopefuls who all sit well in their parts. Some of the bad guys do 'gormless' a bit too well and the main bad leader hulks around like a cross between The Terminator and that strangely voiced villain from Van Damme's Cyborg, but the 'nice' Mayans are given a bit more character depth and certainly enable you to get behind the main hero.

Gibson himself has made it clear that his intentions behind the story were to paint a parallel to the current war in Iraq, berating the US for invading and destroying other cultures. The point is hammered home for the first half of the movie, but the more thrilling second half plays much more like a standard hunter-hunted revenge thriller, and allows you to enjoy it as such. For those who want to read into it, the allusions are clear, but it is just as easy to ignore all the posturing and enjoy the movie for what it is. There is one final issue that I have to briefly deal with, and that's the fact that at no point did this movie display anything that could even remotely be regarded as anti-Semitic. Whatever Gibson does in his private life, he knows how to play captivating heroes and he knows how to make breathtaking movies. There's nothing Oscar worthy here, but it is an entertaining, at times mesmerising adventure which hits all the right spots, and it comes recommended.