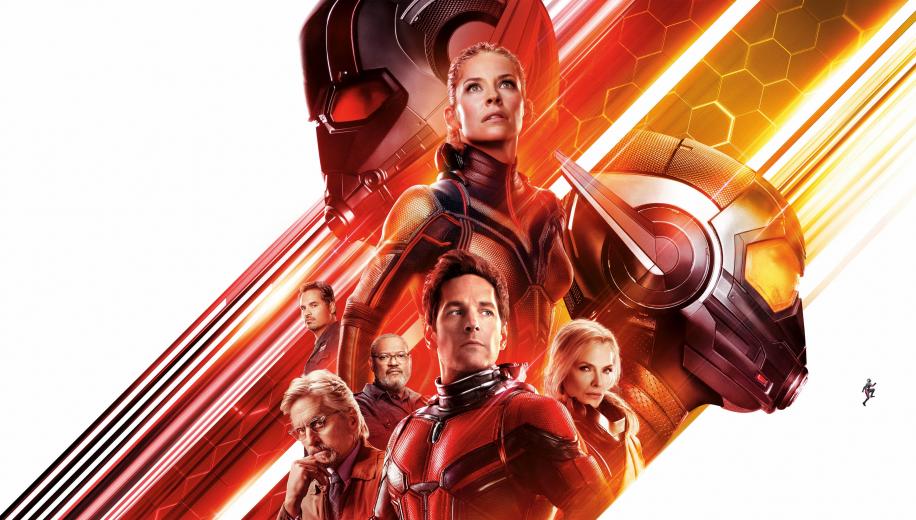 Ant-Man and the Wasp Film Review

Before the Marvel universe was torn apart in Infinity War, the question on everybody's minds was clearly: what was Ant-Man up to?

After Infinity War changed the landscape of the Marvel Cinematic Universe in a BIG way, it's almost odd to go backwards in time to fill in the gaps, but as we wait for Captain Marvel to introduce herself and hopefully make a dent in next year's Infinity War sequel, Ant-Man and the Wasp takes us back to the small-scale universe of the incredible shrinking man to explain what he's been up to since he took a side in Civil War. And the answer is: not a lot. It's just not a question that everybody was asking in the wake of the game-changing events of Infinity War.

However, taken apart from the rest, Ant-Man and the Wasp provides frivolous fun not wholly unlike its predecessor. It's a little more flabby, but it makes up for that with more confidence, happy to play out more light, colourful comic book mayhem, kind of acting as a clown-show palate-cleanser after the dark turn of events in Infinity War.

Now, ever since the first film, it was clear that more time with the old Ant-Man (Michael Douglas) and old Wasp (a superbly de-aged Michelle Pfeiffer) would have been welcome, and this sequel embraces that premise, running with it and delivering bookends of excellence and imagination, as well as some suitably hilarious flourishes along the way. The trouble comes with the padding in between, with a very slight story which largely revolves around successively losing and recapturing a macguffin ad nauseam.

The cast are still something of a saving grace, with Paul Rudd now well settled into the lead, Douglas giving some gravitas, and Evangeline Lilly's Wasp and Hannah John-Kamen's newcomer, Ghost, getting to provide the kick-ass female contingent. But Lawrence Fishburne is utterly wasted, and emblematic of the problems in the script, which leave his character capable of turning allegiances on a dime. The threat from outside is also hit and miss - whilst Ghost is a dangerous enigma, Walton Goggins' badly-wigged gangster is terrible and the film lapses into parody when him and his goons take the stage.

There's just enough excellence here at the beginning (though Douglas is still championing the idea of an entire prequel movie) and at the end to make for a worthwhile watch - particularly as we get to see more of the Quantum Realm and, particularly, given the likely import of that in the future of the entire Marvel Universe. But a much better film could have been constructed in between, even if the flaws are considerably more tolerable in the comfort of your own home. Ant-Man and the Wasp certainly provides lightweight, throwaway fun, and - for many - this was just the right antidote to the game-changing events of Infinity War, but that doesn't stop it being one of the weaker entries in the Marvel canon.

Ant-Man and the Wasp 4K Picture

Ant-Man and the Wasp earns itself a 4K video presentation primed on a 2K DI-based upscale, which has been used here for this Ultra HD Blu-ray release.


Upscale or not, Ant-Man and the Wasp looks great.

Whilst Disney does it best to avoid full fat native 4K releases (lumbered with a 2K DI pipeline), that's hardly prevented their Marvel 4K output from being amidst the best-looking titles on the format. Part of this is thanks to the fact that the 2K DI does not affect the provision of a full spectrum of 4K colours (once again, chroma subsampling is no higher in a 2K upscale than in a native 4K release on a UHD; both leagues less than the subsampling implemented on 1080p Blu-ray) so films which are vibrant, vivid and CG-dominated often come across as considerably more striking than in their 1080p guise, even if they are from a 'mere' upscale.

The nuances afford an image which still promotes a tangible uptick in visible detail - evident on the finer flourishes of the super-sized Ant-Man's costume, but particularly striking on the fabulously realised trip(s) to the Quantum Realm, which look arguably even more imaginative than the colourful universe-hopping locations brought to stunning life in the Guardians movies. Sure, the movie has a more naturalistic, even muted tone for the most part, but the colours on offer are also richer and more nuanced, and, when it pops, it pops. Yes, HDR and WCG may be doing the heavy lifting here, rendering added levels of shadow detail and colour detail and leaving the primaries popping with an added intensity, but it doesn't much matter what the reasons - upscale or not, Ant-Man and the Wasp looks great.

Ant-Man and the Wasp 4K Sound

The real shock news is that all three tracks are excellent. Yes, they are not quite the top tier, reference audio tracks that sell Atmos and that many of the year's biggest blockbusters are expected to peddle (Mission: Impossible - Fallout 4K Blu-ray), but it's a surprise mostly because fans have come to expect a certain lack in lustre when it comes to Disney's Marvel audio tracks of late. And by late, we're talking basically since 2013's Age of Ultron. Ant-Man and the Wasp's Dolby Atmos track may not be the best audio you've heard this year, but it's the best audio we've had from Disney's Marvel output in years.


The best audio we've had from Disney's Marvel output in years.

Right from the flashback prologue, which kicks off with exciting intensity, the surrounds draw you in with swirling all-encompassing wind noises and an aural smorgasbord of effects which overwhelm as you hit the Quantum Realm. Each setpiece - as big, bright, fun, colourful and over-the-top as they were going for visually, gets just as much airtime aurally, with the super-sized and half-super-sized antics of the lead character making for plenty of bracing sequences involving ships, vast displacement of water, and using vehicles like skate/surfboards.

The futuristic noises that Pym's varies devices create are unique and perfectly 'authentic' for this fictional tech, and Ghost's glimmers create a wonderful aural ripple to match the visual displacement. It's great when we get all Inner Space in the Quantum Realm, leading to that underwater feeling in this seemingly alien environment, and the Atmos sound design really engulfs you in that universe. Despite all of this, there's still not quite as much LFE input as you may have hoped for, and, perhaps due to the material, it's not quite the overwhelming bombastic affair that generally makes for 100% demo blockbuster territory, but it's damn close, and this is easily the best audio Disney have delivered for the MCU, and hopefully a sign of the times changing behind the scenes.

Ant-Man and the Wasp 4K Extras

Hardly packed with extras, the Ant-Man and the Wasp 4K Ultra HD Blu-ray release does thankfully cover the most important bases - Commentary, Making-of Featurette and Additional Footage - but unfortunately, doesn't bother porting any of them over to the 4K disc itself, leaving you compelled to pop in the accompanying Blu-ray if you want to delve behind the scenes.

Headlined by Director Peyton Reed's interesting audio commentary, there are also a quartet of mini-Featurettes which look behind the two lead characters of Ant-Man, and the Wasp, separately, as well as their predecessors Hank and Janet together, rounding out the selection with a great look behind the VFX of the Quantum Realm.

The additional footage affords us the fun of a bunch of Gag Reel material - including some from the late, great, Stan Lee - and a short bit of Deleted footage too. It's a solid package.

Ant-Man and the Wasp 4K Verdict

For many this was just the right antidote to Infinity War, but that doesn't stop it being one of the weaker entries in the Marvel canon.

The 4K Ultra HD Blu-ray release of Ant-Man and the Wasp provides a welcome surprise - not only does the upscaled 2K DI-limited video look largely excellent, but the audio track is largely demo too, and with a solid selection of extra features, fans should consider this a decent release to add to their burgeoning MCU collection.