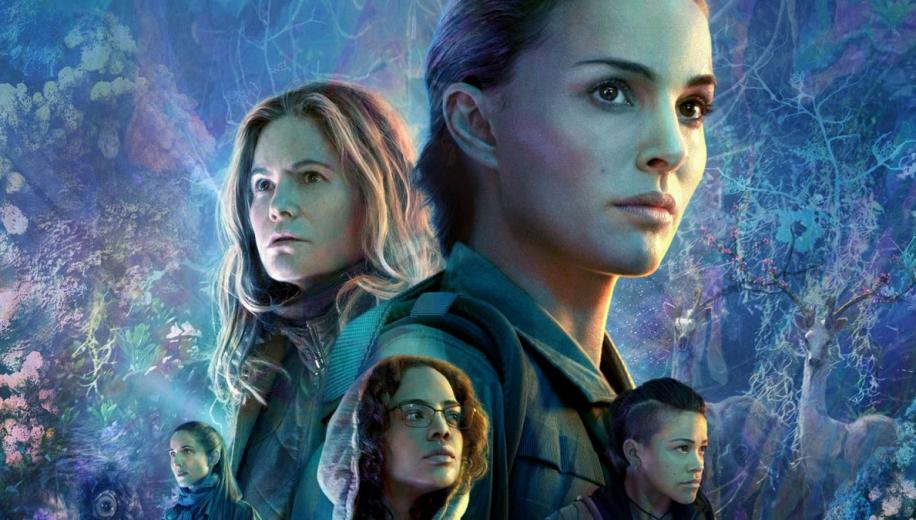 With the recent revelations about just how much writer Garland had to do with the production of Dredd - even directing much of it - the man has an even more impressive history with both writing and directing films. 28 Days Later, then the underrated Sunshine, then Never Let Me Go and Dredd, culminating in his official directorial debut with Ex Machina. Indeed, with all of this behind him, it came as quite a shock when it was announced that his latest work, his medium budget sci-fi horror adaptation of Jeff VanderMeer's novel Annihilation, was only going to receive a theatrical release in the US, with a worldwide release going to Netflix.
Annihilation follows Natalie Portman's cellular biology professor - and ex-soldier - who joins a taskforce of experts sent into a mysterious quarantined swamp jungle zone called "The Shimmer", because of the bubble-like case that surrounds it, which is slowly growing outwards and will eventually envelop the whole planet. Once inside, the group immediately start to experience time and memory loss, and malfunctions with their equipment, but it's not long before they encounter far worse - mutated animals and genetic aberrations which are so nightmarish that they begin to question their own concept of reality. Annihilation is one of the first - if not the first - Netflix movie which clearly should have seen a theatrical release. Like Ex Machina, it boasts a potent atmosphere, impressive style and scoring, and superior character development, slow-burning a similar sci-fi horror-themed narrative, only here on a broader scale as afforded by the corresponding budget. And unlike most of Netflix's film exclusives, it doesn't feel Netflix in style, benefiting from a wide cinematic 2.40:1 aspect ratio and clearly designed to fully utilise the broader scope.

Of course the reason for this is because it arguably only landed on Netflix due to release disputes - with the director and producer (who had final cut privileges) insisting upon maintaining the original vision of the film against the wishes of Paramount, who wanted changes made, leveling accusations of being too intellectual and too complicated, and requesting that even the ending be changed. Despite final cut privileges, Paramount could still choose how to disseminate the end product, and they chose to strike a deal with Netflix, and whilst poor US Box Office performance has left this regarded as nothing but a lucky break, the reality is that even Garland never intended his film not to be seen in the cinema first. Certainly it would have benefited from the scope and atmosphere inherent from seeing it on the Big Screen, but home viewers should celebrate this as one of the first bona fide Friday night event movies that is worth turning the lights off and enjoying the best way you possibly can. And they should celebrate the fact that Garland and his producer, Scott Rudin, stuck to their guns on this one, because this is one of those films that could have been utterly ruined by test-audience-based changes and, as it is, it's a little gem.


It's Garland's audiovisuals that defines the piece, as with Villeneuve's for Arrival

Garland's two-hour feature has hints of everything from Aliens to Avatar, from Carpenter's The Thing to Villeneuve's Arrival, and is most obviously comparable to Tarkovsky's classic Stalker, although it's far more thematically related to Garland's own Ex Machina - particularly in mood and eminently dark sci-fi thrills, building tension through inexplicable events; through intelligent characters struggling to explain what they are encountering and what they are experiencing. Attacks from out of the shadows come swiftly and unpredictably, with Garland benefiting from the presence of subtly mutated animals rather than some dodgy CG creatures (which, almost universally since Geiger's Alien, have struggled to hit the mark). More stark body horror is evident too, with one of the most terrifying scenes coming from an old camcorder clip the group discover left behind by the individuals on the last ill-fated expedition.

Portman is impressive as the lead character, imbued with a sense of vulnerability that's only due to her tragic past, with her single-mindedness to the task at hand evident in her every step; evolving into something of a modern day Ripley across the narrative, and remaining the beating heart of the story. The all-female supporting cast (but for Ex Machina's Oscar Isaac and Doctor Strange's Benedict Wong) includes Jennifer Jason Leigh (The Hateful Eight), Gina Rodriguez (Deepwater Horizon), and Tessa Thompson (Thor: Ragnarok), who all commit to the unusual sci-fi piece with aplomb.

However it's Garland's audiovisuals that define the piece, as with Villeneuve's for Arrival, delivering striking visuals that range from rainbow rays of sunlight to later shots of pure visual opulence, married to an unusual score from regular collaborators Ben Salisbury and Geoff Barrow which leaves you disconcerted, whilst the non-linear narrative and minimal exposition puts you on edge about what will happen next, and particularly about what will happen at the end. As with Ex Machina, the whole feature builds to a shocking finale which will leave you gripped, and then full of questions afterwards, surely the hallmark of a quality movie. After a bit of a slow start, Netflix have finally hit a winner.