This daring approach to classic Tolstoy struggles to escape the obvious style-over-substance criticisms. 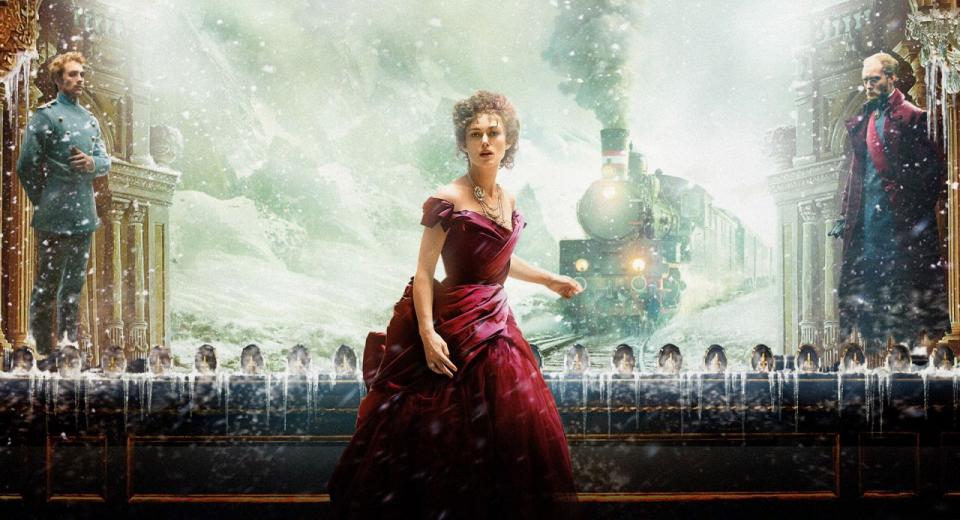 On Region Free UK Blu-ray we get excellent video courtesy of a 1080/VC-1 presentation in the movie’s original theatrical aspect ratio of 2.4:1 widescreen. Detail is impressive throughout, the elaborate sets coming to life with intricate fine object observation; skin textures rendered authentically, and wider non-stage vistas promoting the snowy Russian landscapes in all their glory. The colour scheme perfectly renders the broad and rich tones on the wide palette, never attempting to over-glamorise, whilst also staying true to the theatrical style of the feature. Black levels are strong and deep and show no signs of absorbing that shadow detail, even though there is a smidge of generally unobtrusive crush. Defects are otherwise non-existent, however, with no noticeable edge enhancement, no unruly DNR application and no significant banding or aliasing. All in all, a near-perfect video presentation that easily earns itself a demo score.

The accompanying DTS-HD Master Audio 5.1 track also impresses at almost every level, creating a wonderful atmosphere for the piece which at once mirrors the claustrophobic limitations of the stage-set scenes, whilst also expanding out into the broader, seemingly limitless real backdrops. The high point is clearly the rousing period-infused (and Oscar-nominated) score, but the effects are carefully juggled throughout, with not only the louder train screeches and screams taking over, but also the subtle atmospherics remaining discernible throughout. Dialogue is clear and coherent for the entirety of the piece, emanating largely from across the frontal array – as you would only expect – and, all in all, this is a superior offering which just lacks that certain spark necessary to push it into the demo arena.

The extras package is also impressive, matching up with the US counterpart with a pretty comprehensive selection that covers all the bases – and then some. The Director’s Commentary provides a dry but informative overview on the production, adding plenty of interesting trivia which might offer insight into the atypical style. The quarter-hour of Deleted scenes, each a couple of minutes long, don’t offer any great deal more to the proceedings but are worth dipping into. In terms of Featurettes, Adapting Tolstoy is just a 5 minute brief look at the work Wright and Stoppard did to get this done, On Set with Director Joe Wright spends a further few minutes just with Wright, An Epic Love Story About Love brings in the rest of the cast and crew to talk about the classic tale, Keira as Anna spends even less – four minutes – with the leading actress, Dressing Anna reduces it to 3 minutes for a look at the Award-winning costume design and finally Time-Lapse Photography offers us an 8-minute fast-forward version of the main stage being constructed. All of the Featurettes add up to some interesting material but they’re a bit bitty. This daring approach to classic Tolstoy struggles to escape the obvious style-over-substance criticisms. Indeed it’s no surprise that so many fans were surprised when the director, lead actress, and many of the supporting cast and crew members from such great modern classics as Pride and Prejudice and Atonement reunited for... this. Oddly, if Edgar Wright – whose style has been getting increasingly adventurous with each successive film (Hanna) – had just dropped his in-your-face theatrics (literally setting the whole thing on a moving stage!) and stuck to the serious drama beneath it, he may have pulled off a film on par with his previous efforts. As it is, only the cast really deserve credit for rising above the misguided style, and it’s in the performances and the original story itself that fans must seek refuge.

On Region Free UK Blu-ray we get excellent video and audio as well as a fairly comprehensive selection of extras, all resulting in a package that no fan is going to be able to resist. Unfortunately fans of Wright – or the cast – who have not yet seen the movie should seriously consider restraining themselves to just a rental initially. If you make it through the first 15 minutes the rest of the film does get better, but, for many, the in-your-face style may just be too much to swallow.