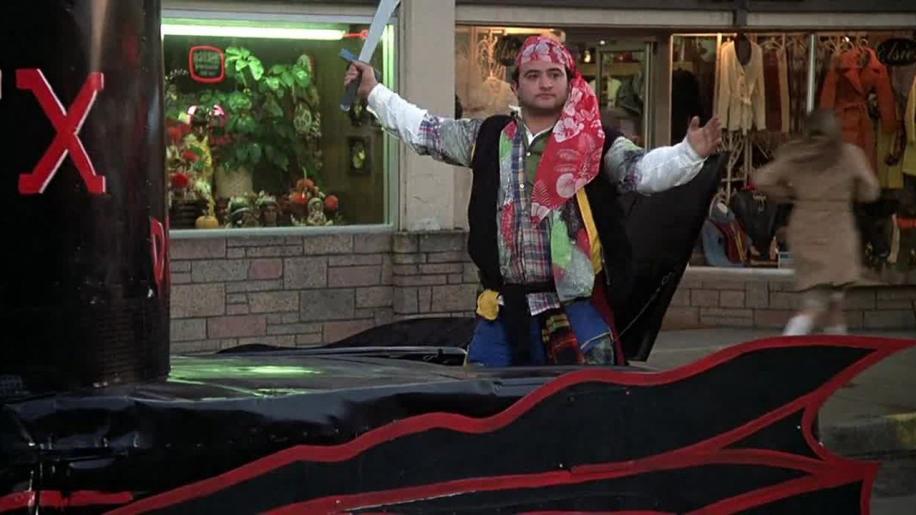 The 1.85:1 anamorphic print has been specially restored for this release and presents a nice clean print which is almost totally free of the effects of aging. Low on grain, minimal amounts of scratches, which are really only noticeable when you go looking for them (as I do for you dear reader) and realistic skin tones and colours, although by modern standards people may judge them as somewhat flat. This however is more to do with the tendency these days for every movie to have its colours “punched up” to give a more contrasty image. Dark scenes can appear a little grainy such as the inside of Dean Wormer's office when Flounder fires a starting pistol and the horse has a heart attack (you have to see it to believe it). But otherwise a good job has been done of cleaning up a print that is over 25 years old. It has never looked better. Given a Dolby Digital 5.1 makeover and mixed at 384kbps for the anniversary release, the soundtrack does less well than the picture. The dialogue channel is clean and clear with none of the hiss or pops that I remember from its last T.V. outing, however, as with many remixed soundtracks not much goes on elsewhere. There is very little going on in the surround or LFE channels and only a little more in the front soundstage. The dynamic range seems compressed, and doesn't even open up when Otis Day and the Knights play their version of “Shout” at the Toga party. Never mind, its audible, and in this movie that is probably all you will care about. This being a special edition to celebrate the movies anniversary you would hope that Universal would really pull the plug out with boundless extras. Well you will only be mildly disappointed then. What is on offer is excellent but maybe less than you would hope for. For example there is no feature commentary from Landis or any of the film's actors. What we do get is something Universal has dubbed its anecdotes. This amounts to occasional subtitles with facts and on set anecdotes, which play over relevant scenes. Did you know for example that Chevy Chase turned down the role of Otter to star in Foul Play instead? Or that Harold Ramis wrote the role of Boon for himself, but considered himself too old to play the role when the movie was shot - he was 33 at the time. Or that Richard Nixon was the inspiration for Dean Wormer. As it gave me another reason to watch the movie I didn't mind at all. The facts are fascinating and will score you brownie points at film club. Although we didn't get a feature commentary Universal has made the spoof documentary Where Are They Now? which follows the characters in their careers since college. This is presented by John Landis and provides interviews with Boon, Otter, Dean Wormer et al. This is very funny and well worth a watch. The final documentary is a straight presentation called Animal House Reunion. This consists of interviews with all the major players involved in the writing and production of the movie. Again this is a marvellous insight into a classic movie, and worthy of your time. Animal House is a comedy classic which almost defined a genre and was certainly groundbreaking for its time. This restored print produces a good picture and adequate sound with a select few watchable extras, but it's the movie itself that we've all come to see, and we won't be disappointed