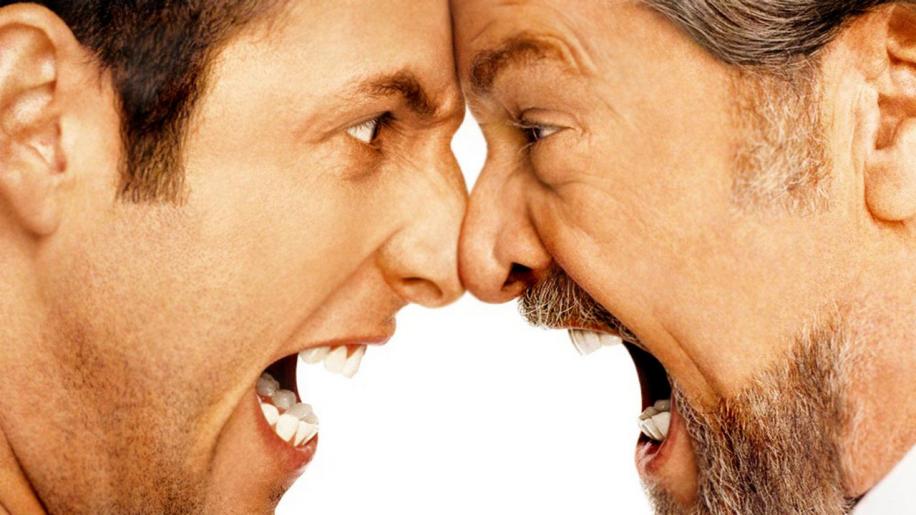 Adam Sandler stars as Dave Buznik an everyday bloke who wouldn't say boo to a fly and who works as an executive assistant who should be getting that promotion. During a flight to meet his boss Dave finds that his seat is already taken, but not making a fuss he ends up sitting next to an unusual character, who does anything but make the flight go by quietly. As he gets more annoyed he asks an air stewardess for some head phones and so begins his nightmare. Dave is in court and charged with causing a disturbance on a plane and is sentenced to 20 hours anger management. Taking his course is Dr. Buddy Rydell (Jack Nicholson) who was the passenger he sat next to on the plane. Dave attends the group therapy and is given an anger buddy, who ends up getting Dave into a fight in a bar were he accidentally assaults a waitress with a blind mans walking stick. So it's back to court this time he is given a prison sentence, but escapes when Dr. Rydell offers an alternative 30 days intensive anger course. This has some attachments to it; one being that Rydell will now be spending all his time with Dave. So starts all kinds of crazy goings on with Dave and Rydell taking part in even more bizarre situations as Dave's therapy gets crazier and crazier.

I am not a Sandler fan as such, but I have found some of his material very funny such as Wedding Singer, Happy Gilmore and Big Daddy, which whilst not hilarious masterpieces are quite amusing movies. Anger Management is much of the same really, with Sandler playing the same hapless character that is haunted by his past and scared to commit to his present day life. He should be promoted but refuses to stand up to his boss, he should be married but can't even kiss his girlfriend in public and so the story goes, he needs some serious direction in his life. The casting of Nicholson and Sandler is inspired and for much of the movie the partnership does work, it is however a shame that there is not enough decent material to develop this partnership. The first half of the movie works very well, but the last third is quite frankly absurd. However there are enough good jokes in there to keep you entertained, it is just a shame that when you have such a talented cast the script and direction lets things slip.

The movie will go down well with Sandler fans and those who quite enjoy his work and Nicholson is energetic enough to keep the film funny. However if you have not enjoyed Sandlers work thus far it would be wise to avoid this, as it is nothing special, or for that matter original. A real missed opportunity with some half-decent laughs to be had but that's all that's going for it.