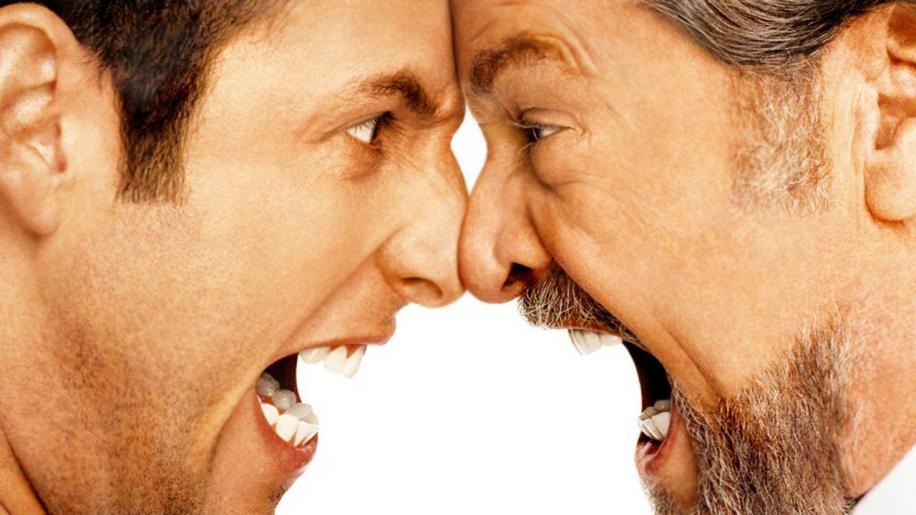 Director Peter Segal brings together Adam Sandler and Jack Nicholson in a movie that aims to be the antithesis of your average comedy buddy movie.


Dave Buznik (Sandler) is a man with issues. However, these issues are not (as the title may suggest) problems with losing his temper. In fact Buznik's problem is quite the opposite. He is the most mild-mannered, laid back, relaxed person that you could imagine. He is totally afraid of letting any kind of emotion show in public, even to the extent of not openly kissing his wife when catching a flight at the airport. On the flight, however, he does have a rather unfortunate argument with an air hostess which ends with a rather ridiculous charge and a judge sentencing Buznik to anger management classes.


His assigned therapist is Buddy Rydell (Jack Nicholson) - a completely nuts man who only succeeds in pushing our previously mild mannered individual into previously unheard of fits of anger. When he ends up back in court a second time, the court sentences him to a more intensive form of therapy. Rydell must move in and live with Buznik.


Thus, the set-up is established and what follows is the tale of the two desperately mismatched men, very much in the style of Planes, Trains, and Automobiles as one sane straight man, tries to deal with an unwanted, slobbish, and irritating house guest.


To be honest, the set-up sounds clichéd and obvious. It sounds like a high concept with not much thought as to how it might play out on a movie screen, yet for some reason I liked Anger Management enough to have seen it three times. And before I wrote this review I really wasn't sure why that is. I am not a Sandler fan (in fact I actively dislike him), Nicholson I can take or leave, and I am not a massive comedy fan. Yet something about the combination here just worked for me.


Sandler plays the same character that he always plays, the straight laced, mild mannered character with that slightly goofy grin - but when up against a foil like Nicholson he seems to raise his game bringing a sense of humanity and warmth to his character. You do genuinely feel sympathy for him, as his world falls apart around him, and he becomes more and more bewildered by events that are overtaking him. Yes, this is a comedy and Sandler brings plenty of laughs to the proceedings - but never without forgetting he is playing a character. This does bring some uncomfortable truth to some of the comedy scenes, but comedy should be uncomfortable sometimes - and that is part of this film's success.


Nicholson I can take or leave. A brilliant actor admittedly, but a lot of his work has left me cold. In Anger Management though, he throws himself into an unsympathetic role with a gusto that is refreshing to see. Not known for broad comedy, and having to portray a completely unlikeable character, Nicholson attacks the part with relish - brilliantly essaying his character. This may not be an OSCAR winning performance, but he shows a surprising sense of comic timing and provides a brilliant foil for Sandler.


There are some other notable performances too. Marisa Tomei is woefully underused in her role, and thus does not really stand out at all - although this is not really her fault. John Turturro (an underrated actor in my book) puts in a superb shift as Chuck - almost stealing the movie from under Sandler and Nicholson's noses. No mean feat. We also get funny cameos from Woody Harrelson and John McEnroe.


So despite the excellent performances, and the fact that I enjoyed the film a lot - I find myself unable to give a higher mark. Why is this? Well, for a start the plot is not as well thought out as it could have been. I mentioned earlier that the plot sounds like a high concept idea with little thought to the execution - and indeed it comes across exactly like this on screen. It is almost as if someone had the idea of putting Nicholson and Sandler together in their respective roles, and fit the plot around that idea. It is not as if the resolution is that bad in the scheme of your average comedy movie - at least it does attempt to explain events. But at the end of the day the ending of the film really is quite simply unbelievable.


Without giving too much away there is a twist of sorts at the end, and it is one of those twists that at first seems quite clever. However, it only takes a few seconds thought and the whole idea, and by extension the film, starts unravelling very quickly. The conclusion demands a collusion between the protagonists that is quite ridiculous and unlikely and this does rather undermine all the good work that has gone before. The script writers should either have just left the basic concept to be simple and undemanding - allowing Sandler and Nicholson to just spark off each other, or they should have put much more thought into explaining things at the end. Because, as things stand, Anger Management manages to undo a lot of its previous good work in the last twenty minutes.


Yet despite this flaw, the performances and plot are marshalled really well by director Peter Segal which is surprising when you consider some of his past works. Making his cinema debut with Naked Gun 3 he very quickly managed to go downhill, and was responsible for Nutty Professor 2 : The Klumps just before Anger Management. But here he shows that with a decent cast, and a reasonably funny script he is able to craft a decent film. He shows a good sense of comic timing, with a lot of the shots framed well and timed to perfection. It is perhaps to his credit that he manages to elicit such a bravely anti-performance from Nicholson - and also manages to balance the comedy and pathos with the Sandler character well.


So, Anger Management is what it is. It is not an all time classic, and it has some major flaws. But until the end it does contain some well written, funny scenes, some excellent performances, and does manage to introduce some realistic motivations for the characters. I have certainly considered it worthy of a permanent place in my collection, and anyone who has not checked the film out yet should certainly do so. You may be pleasantly surprised.