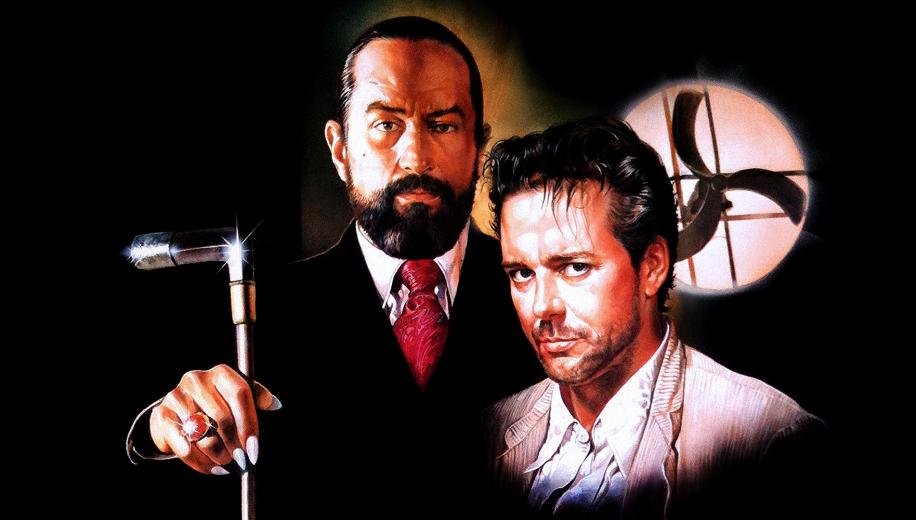 By 1987 Mickey Rourke was at the top of his game, starting out in a Spielberg film, enjoying early scene-stealing success in Francis Ford Coppola's Rumble Fish, dialling it up to 11 for Michael "The Deer Hunter" Cimino's Year of the Dragon, and cementing his sex appeal in Adrian Lyne's 9 1/2 Weeks. He had range and commitment, which perhaps was never more evident in his Golden Era than in 1987's Angel Heart, as he took the stage in the lead role and completely drew audiences into a richly complex tale of deception and misdirection, ultimately rewarding repeat viewers with previously unnoticed nuances almost as much as it does first-timers, who are in for one hell of a treat when they hit the startling finale.

Based on the novel Falling Angel by William Hjortsberg, the story would be masterfully adapted by Alan Parker, who had already cemented his standing with Midnight Express and Birdy, and would follow this up with 1988's return to the Deep South, Mississippi Burning. Its essence remained the same - Private Investigator Harry Angel is enlisted by a mysterious client to track down a missing person who is in debt to him: a once-famous singer named Johnny Favourite. As Harry journeys to New Orleans to interview anybody who might have known Favourite, he finds the bodies mounting up, and soon becomes a suspect, indelibly entwined with the very mystery that he is trying to unravel.


Deeply underrated, and unforgivably overlooked, Angel Heart is a fabulous spin on a detective noir

Despite a decent supporting cast - Robert De Niro is perfectly cast as the mysterious client, Lisa Bonet is feverishly sexy as the girl who unsurprisingly catches Harry's eye, and Charlotte Rampling, who really deserved more screen time, yet still manages to lend some gravitas - there's still no denying that Angel Heart was basically all Mickey Rourke. The then-still hungry actor utterly devoured the role, committing so wholeheartedly to the character that you're almost as invested in the voyage on repeat viewings, simply because he's so damn convincing. It's a heart, body and soul performance, and whilst Rourke might be more recently remembered for his robbed-of-an-Oscar The Wrestler comeback performance (or, perhaps on a different scale, arguably his biggest movie, Iron Man 2), Angel Heart's a strong contender to top it for the best of his career, and is certainly the best of his Golden Era.

Parker would also make the New Orleans setting something of a character itself, perfectly recreating the 50s setting, and bringing forth a wonderfully rich and ultimately utterly foreboding atmosphere which permeated the entire feature, playing around with dream-like hallucinations that involves some perfectly framed repeat shots of windows, stairs, corridors and lifts, which were often themselves a work of art. Cinematographer Michael Seresin (who lensed pretty-much all of Parker's films) manages to turn the most innocuous of locations into places utterly dripping with dread, whilst the haunting sax score further resonates throughout. Deeply underrated, and unforgivably overlooked, Angel Heart is so committed in both its ostensible premise and subsequent delivery that, come the end credits, it'll have you almost as in denial as its main characters are about accepting the truth. It's a fabulous spin on a detective noir. Angel Heart makes its UK 4K Ultra HD Blu-ray debut courtesy of Studiocanal, with no equivalent US release on the horizon. It's a suitably impressive native 4K restoration.


This is another fabulous native 4K remaster from Studiocanal, reminding us just how good some of these old classics can look if given a loving restoration

Studiocanal has once again done a tremendous job restoring an older shot-on-film production to current 4K glory, following their accomplished work on The Deer Hunter 4K, Apocalypse Now 4K, Don't Look Now 4K and even the Rambo Trilogy 4K and Lock Up 4K (with Universal Soldier 4K and Red Heat 4K on the way). The results largely speak for themselves and Angel Heart follows suit, with the new restoration cleaning up the image sometimes staggeringly, whilst also thankfully retaining a superb amount of fine detail. Close-ups, on hands, mutilated corpses, and increasingly weary faces reveal lines, veins, blotchy or clammy skin, sweat beats and pock marks. It's impressive, to say the least, enjoying every bit of depth that the source print can provide. If there's a slight downside, it's possibly only one which Dolby Vision viewers might be more likely to notice; that shimmering noise that appears to be slightly exacerbated by the Dolby Vision enhancement. It's not distracting, not persistent, and barely noticeable except in shots with less movement (the beach scene), and there's so much other gorgeous stuff that you largely forgive this fleeting element.

Ironically, it's that very same Dolby Vision HDR (and the WCG) which more than makes up for this with a stunningly broad range of tones, from bright peak whites to rich inky blacks that appear bottomless but still retain a striking amount of shadow detail, pulled from the abyss. A few interiors (the tram) struggle with the lower-level lighting, but mostly it's outright excellent. Spot tones get impressive HDR application too, like red glowing lights, street lamps, and car headlights; red and blue sashes; blue vases, orange lamp shades, and even the myriad candles in the church - the spots of HDR pop are unmissable, and the enhancement brings a vibrancy to the entire palette, particularly noticeable on some of the more colourful backdrops too (the odd shots of gorgeous blue skies and lush green foliage sneak in). As with the others, this is another fabulous native 4K remaster from Studiocanal, reminding us just how good some of these old classics can look if given a loving restoration. The accompanying DTS-HD Master Audio 5.1 track may well be the same track that fans have experienced on the last couple of collector's edition Blu-ray releases, but that doesn't make it any less impressive, with keen representation of the dialogue, strong effects coverage and, perhaps most importantly, exquisite delivery of the haunting score.


The track does a superb job immersing you in the story

Dialogue remains firmly prioritised throughout, getting clear and coherent dissemination, whilst effects take in the whipping of the overhead fans, the metallic rattle of the lift door repeatedly opening, and the bustle of processions and voodoo rituals (the latter of which is really quite hypnotically promoted across the array). The signature heartbeat sound remains pervasive, the LFE appears always on hand to provide welcome support and added depth, and the track does a superb job immersing you in the story.

Of course, it's arguably Trevor Jones' haunting score - and, indeed, that repeated tune - which deserves the majority of the credit, seeping into the very core of the increasingly horror-driven noir with intensity and evident foreboding. It's tremendous work, underpinning the entire film. Studiocanal also does an unsurprisingly commendable job on the extras front (and actually porting them over to the 4K Ultra HD disc itself) delivering most of what fans will have already seen - but for, perhaps, the missing more recent Mickey Rourke Interview - which basically consists of a fair amount of background from the Director and a little archival behind the scenes footage.


Studiocanal also does an unsurprisingly commendable job on the extras front

There's the old Director's Commentary from Alan Parker, as well as an Introduction from him culled from a longer Interview which is also included, and there are some archival interview snippets (including on-set soundbites from a young Rourke) and brief behind the scenes footage, as well as a Gallery. A Background in Voodoo is a further archival piece which looks to debunk the depiction of voodoo in movies like Angel Heart, and the disc is rounded off by startup trailers for Studiocanal's 4K releases of Apocalypse Now and Don't Look Now. Angel Heart marks the latest in a long and welcome line of stunning native 4K restorations given lavish treatment by Studiocanal, following The Deer Hunter 4K, Apocalypse Now 4K, Don't Look Now 4K and the Rambo Trilogy 4K and Lock Up 4K. These are largely definitive must-have editions for fans of the films.


A rich tale of deception and misdirection, ultimately rewarding repeat viewers with previously unnoticed nuances almost as much as it does first-timers

Angel Heart's UK 4K Ultra HD Blu-ray disc affords us not only native 4K video, but also added Dolby Vision enhancement, and with great audio and a solid salvo of extras, it remains a tremendous release of an underrated gem.