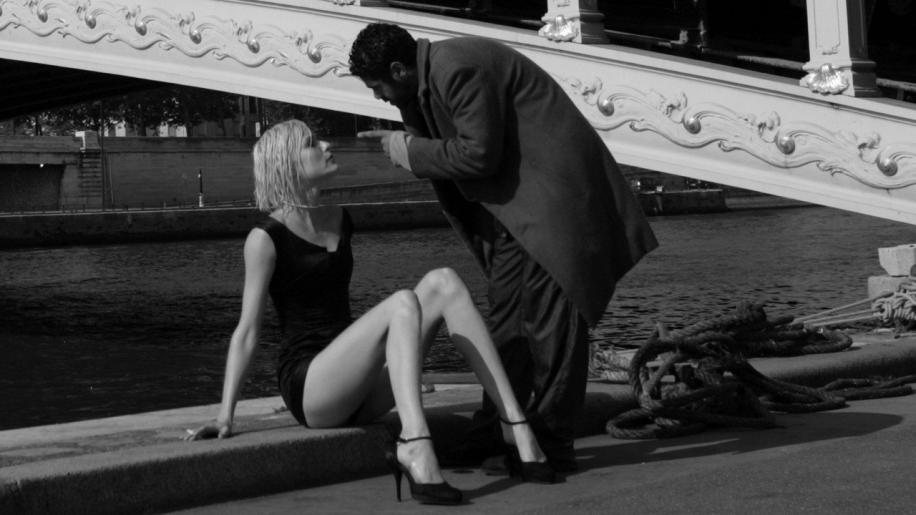 Luc Besson's last outing, prior to Angel-A was the disastrous Joan of Arc, if you read my review about that you'll know that I thought he was capable of so much more. In the past we have enjoyed The Fifth Element, Nikita and of course Leon. I can't say I was too enamoured with Subway, but now I am glad to say there is another movie of his that can sit high on my Blu-ray shelves; Angel-A.

André's (Jamel Debbouze) down on his luck a little, apparently a con-man trying to convince everyone about his business exploits around the world, he has migrated from pillar to post through Paris borrowing money off all and sundry. His debt accumulate and his excuses for non payment become ever more ridiculous. At the end of his tether he tries to convince the American Consulate to grant him asylum on the basis he is in fact an Arab American citizen; failing that he tries to get a policeman to offer him a cell for a couple of days. Every avenue is closed to him so he decides upon suicide by jumping into the Seine. Luckily for him, as he is about to jump, to his left he notices a picture of beauty, Angela (Rie Rasmussen) about to do the same.

She jumps, he follows to rescue her and the two bond, share experiences and spend a day and night together in an almost deserted Paris. If you want to fall in love then all you have to do is fall off a bridge.

With Nikita and Leon, Besson first dived into a world of a government manipulating people for its own ends and then the underground world of the hired hit man. These were dark affairs, occasionally humourous, but ultimately a desperate look at a certain sections of society. He changed tack somewhat with The Fifth Element, introducing a lighter tone with much more humour and an incredibly strong leading lady whose heart still yearned for belonging and love. Moving swiftly past Joan of Arc, his next production, some six years after Joan and eight after The Fifth Element is the one I have the pleasure of reviewing today. Like The Fifth Element before it Besson introduces us to a woman of almost limitless power but who is still fragile and still needs to belong somewhere more permanent than the life she has led to date. You could say much the same about Joan of Arc as well, but I'd rather not in all honesty. So is this a theme that we've seen from Besson before, the strong but lonely woman, I think it's fair to say it's a reoccuring theme in many of his films.

If this is the case then he could have done no worse than the leading lady he chose to fill those boots in this particular instalment. Milla Jovovich was well suited to Leeloo but hopelessly exposed in her next outing with her then husband.

Rie Rasmussen, Angela, really is an incredible woman, at a young 33 she has appeared in five roles, three of which she has directed. In Angel-A she carries a combination of grace, beauty and power that is difficult to match. She commands the early scenes that she waltzes through, dictating the fortunes of André, the moves he has to make, the path that he must ultimately follow. She is stylish, funny and somewhat reserved. Towards the end we see a different side of her character and we come to realise that Rie should have a worthy career ahead of her with excellent range, poise and presence and I hope to see more of her on screen adventures at some future point... if only for those legs!

Although I enjoyed the film, the all so important interaction between Angela and André is admittedly a little weak at times; it also has to be said that it's a little too derivative of other works. There are obvious parallels between Angel-A and It's A Wonderful Life and the 1987 feature Wings of Desire. Angela is an angel sent, presumably from above, to make sure André does not take his life, to make him look and realise that his life is as important as any other. Well that's It's A Wonderful Life covered. Wings of Desire follows a couple of angels one of whom decides that mortal life is far superior to the flaccid immortal existence they are accustomed to. Again this is reflected in Angel-A. Angela falls in love, and yearns to stay but cannot, or can she? If you're looking for these kinds of emotional plays then the first two films are far superior in that regard and I would highly recommend them to anyone. Besson makes a good stab with his own interpretation but doesn't quite come close to what has gone before.

As is usually the case Besson has reassembled the usual troupe he works with however it is the work of cinematographer Thierry Arbogast which deserves a special mention here. A long term collaborator with Besson, having worked on his earlier features Joan of Arc, The Fifth Element , Leon and Nikita, his work on Angel-A is almost sublime. The use of light to explore the black and white Parisian cityscape is a joy to behold. Fine and detailed, subtle and warm, it's a glorious piece and one which sets this film apart from the aforementioned works that are its roots. Even with the sound muted you can sit back and let those visuals wash over you.

A good enough shout at a light hearted romantic comedy of sorts with little else to say or demand from the viewer. A good watch but it has been done before with far superior results. Again Besson completists may like to get their hands on this one and I for one will certainly give it another watch. For others though a rental, and it would be a good one at that.