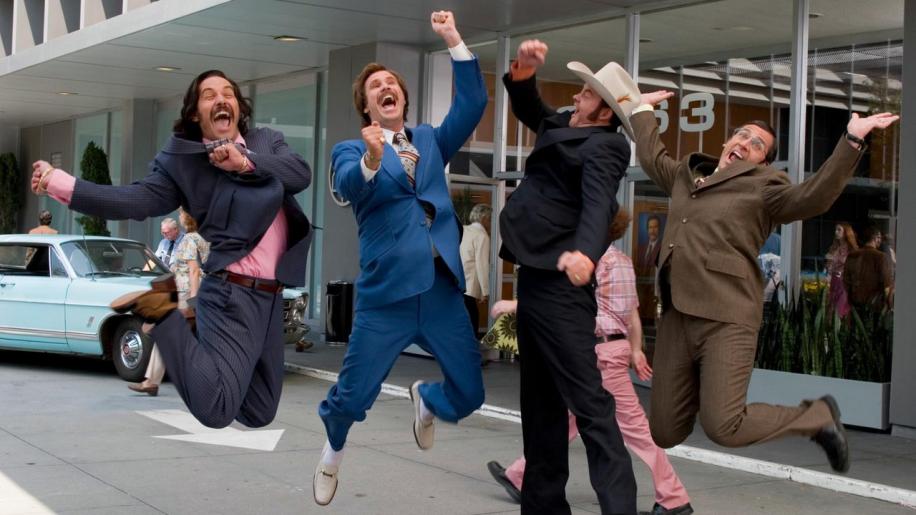 Will Ferrell is on a roll of late, the Saturday Night Live comic hit the big screen last year with Old School and has quickly followed that success with Elf and now Anchorman. Set in 1970's San Diego, Anchorman follows the, (at the time), male dominated world of TV news and what happens when a woman is added to the equation. Ferrell is Ron Burgundy, channel 4's legendary news reader, supported by his team, sports reporter Champ Kind (David Koechner), reporter Brian Fantana (Paul Rudd) and weatherman Brick Tamland (Steve Carell). Everything apart from the camp 70's wardrobe is going well until station manager Ed Harken (Fred Willard) adds a new female reporter Veronica Corningstone (Christina Applegate) to the team. The men try hard to get at the new member, from corny chat up lines to trying exotic aftersaves, but it is Ron who manages to win Veronica's heart and find himself a soul mate. However a bizarre encounter with a Hells Angel biker (Jack Black) makes Ron late for the News and Veronica jumps at her chance to Anchor for the first time to great success. Ron's world is about to collapse.Anchorman is the funniest film I have seen this year, the parody of 70's news reporting is inspired and the lines are some of the most quotable in a long time. Ferrell is superb as the male chauvinistic lead and the supporting cast are all believably funny. What makes the world of Burgundy shine are the rather silly scenes involving West Side Story type street battles between the various news organisations, the fact Ron can talk and hold conversations with his dog, and the completely random news room rendition of Afternoon Delight. Add to this some excellent cameos by Ben Stiller, Vince Vaughan, Tim Robbins and Jack Black and you are in for some hilarious fun. The unrated version reviewed here has 6 minutes of added naughty footage. Recommended.