The return of Jack Cayman 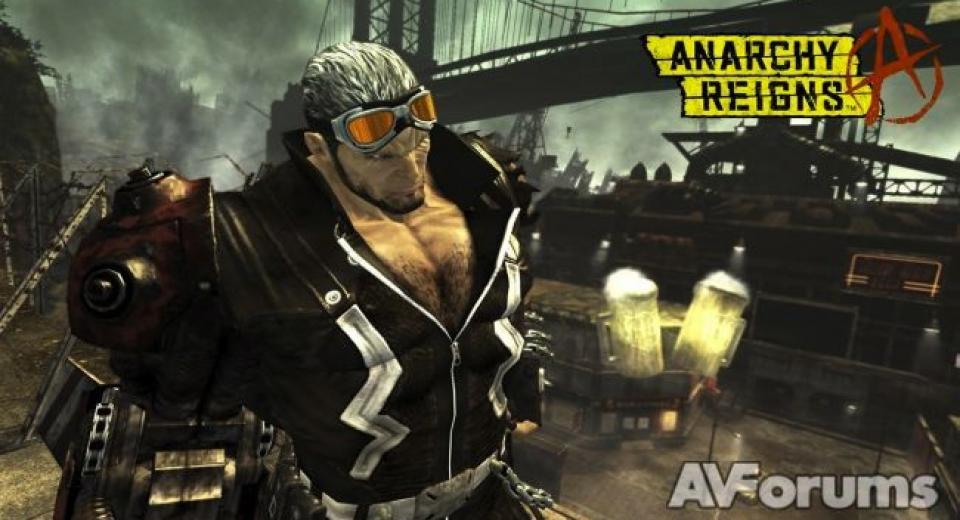 Big on attitude, and with a name like Anarchy Reigns, you’d expect this swaggering, expletive laden beat ‘em up from Platinum Games (Mad World, Bayonetta) to throw off the shackles of convention and find a unique selling point; it doesn’t.  It casts itself as a pick-up-and-play slice of fist-fuelled mayhem by adhering to a well worn formula when it comes to combat, which, after all is what the game hinges on, as the narrative isn’t winning any awards (though the cut-scenes are pretty slick).  If you’re finished drinking in the rarified air of the superbly scripted The Walking Dead from TellTale and crave something earthier, then Anarchy Reigns is the answer - an unapologetic slice of pulp videogame fodder, absurd and cartoonish in a strangely knowing - and altogether Japanese - way.

The continuation of themes from the over-the-top violent Daily Mail-baiting Wii title Mad World is at the fore with the return of protagonist Jack Cayman.  A man mountain so grotesquely muscular and out-of-proportion that even Marcus Fenix would look on him as a no-necked steroidal meathead.  In terms of plot you can tackle the campaign by choosing either Jack or a secondary character, Leo.  This gives you a view of the goings-on from two perspectives, and handily boosts longevity, which you could always see was going to be an issue due to the repetitive nature of beat-em up gameplay.  Well, it should, but in actual fact the split narrative is all one story, which doesn't have a great impact as the goings-on, though coming from an interesting art direction within a well constructed setting, makes little sense. The two characters are your typical fighting options - speedy and nimble or slower and stronger. The single-player game is split up into locations which can be freely explored, populated with waves of post-apocalyptic ne’er-do-wells and mutants in this dystopian future full of pleasing cyber-punk touches.  You unlock the missions by accumulating enough points, achievable by brawling your way through masses of onrushing weapon-wielding goons.  It’s a mechanic that works pretty well, you’d assume its roots lay as much in necessity as a gameplay design preference, as this way it negates the need for kilometres of virtual streets to wade through.  The waves keep coming, and the lack of breathing time means you rarely feel the need to assess how constrictive the areas truly are.

The open-world sandbox feel can be viewed as both a training option (though those exist as well) and a strangely enticing time-killer.  Drop in for ten minutes, rack up some points so you unlock the next mission and turn off.  The old-school genre atmosphere of simple AI patterns is both a strength and a weakness, but the template for the type of carnage Platinum craved was always laid down in the control scheme.  It’s formulaic and thus easy to get to grips with, your basic weak and strong attacks, accompanied by block, evade and throw.  A meter that ramps up according to how much damage you inflict or take gives you access to a “Killer” move and for good measure there’s a hyper state you can enter, entitled “Rampage”.

You’ll soon find the combos needed to breeze through the opening levels are perfunctory ones, mashed buttons will often do, with only large enemies requiring you to remember how to evade.  Get further in though and the missions will start to get more interestingly testing, limiting time and deaths.  The enemies are the usual suspects, lifted straight from the beat-em up guidebook - weak underlings reliant upon fists, weapon wielders of varying types and huge lumbering behemoths with charge attacks.  The comic-book post apocalyptic setting has provided fertile artistic ground that’s been pretty well furrowed though, as the vehicles (which can be hijacked) and robotic drone fighters are well realised and add a touch of spice to proceedings. If anything, the slightly western anime artistic direction is what holds everything together, an element only let down when the tries-too-hard sweary hamminess of the script (criminally bad in Jack's "Black" side of the story) raises its head in interludes.  Considering the pulp appeal it’s only odd that blood is conspicuous by its absence, but this whiff of constraint is negated by the two dimensional female characters, jiggleage and all, attempting to put the tit into titillation.

The lack of complexity in combat is as it should be for this type of game - it’s old-school arcade escapism, designed for a somewhat disengaged brain and not ashamed to wear its brash stylings on its sleeve.  The unlockables, such as new characters and abilities for the multiplayer mode come along at regular intervals, and the moreish nature to the mindless carnage make it all too easy to continue reducing enemies to an emulsified state.  You will tire of it all, and the conveyor belt of combatants in whatever variety will start to grate, but the campaign can be breezed through - with either character - depending on whether you choose to take the “Free” missions, and once complete you can revisit the single-player levels with some of the unlocked characters to test out their fighting styles in preparation fro the multiplayer modes.

Whichever way you choose to tackle the main story, you’ll definitely want to pop into the multiplayer game.  This is a surefire way of telling whether the accessible combat system is simply light on refinement or hides its light under a bushel against the treadmill of predictable AI.  There are modes galore, with all you’d expect and a few more - Battle Royale for up to 16 players, Team Deathmatch (4 vs 4), Team Battle, Capture the Flag, a 1 on 1 Cage Match, co-op Survival for 3 players and the sports oriented Death Ball are the main draws.  You’ll earn experience points in each, level up and unlock an assortment of goodies.  There’s a snag though, and it seems a great pity that there is an abundance of modes to lose yourself in but too few players about.  Going with the quick match option will see you meet with the usual wait in a lobby, but try to find a game in one of the more interesting offerings, such as Death Ball, and you’ll likely be met with the “No sessions” message or at best get shunted to the US servers. When it works it can be fast-paced and fun, but there are the early signs of players relying on teaming up, spam attacks and generally - as is always the case with multiplayer games - finding the easiest route to success.  The use of far flung servers in order to get a game, combined with the slightly cramped camera mean when there’s a full house the possibility of being pulverised by an unseen opponent is always near.  The modes with fewer players often prove the fairer battle grounds, whereby the use of abilities and teamwork starts to hint at a whiff of tactical subtlety.  But don’t expect too much subtlety from a game with a man wielding a double chainsaw, whose retort upon executing a mutant is a bluntly shouted “**** off”.

Anarchy in the UK

Anarchy Reigns doesn’t attempt to hide its shlocky simplistic beat ‘em up appeal, it downright revels in it.  Much like Asura's Wrath, but without the quick-time-events, it can come across as an interactive anime of sorts, pushing you into a series of boss battles with superhumans, punctuated by mad but gorgeous FMV sequences.  Unlike that title though, it lacks really lengthy cinematics and has a script that hits lows that are positively subterranean, with a caricature protagonist that defies lampooning.  Buy into this hook, line and sinker, and you’ll find a dystopian futuristic setting that has a few nice touches and some accessible gameplay, light on tactical deftness but compensating with sheer bombast.

Unfortunately, even with the lure of taboo hyper-violence the game quickly becomes reduced to formulaic staples that fall too easily on the side of the generic.  With the emphasis clearly on the multiplayer - a hand tipped by the single-player environments that work far better as the battle maps they were designed as - the disparity between good matches and outright frustration of spam attacks undermines the fun.  It can still be a slice of old-school escapism, with some nice trappings bolted on, but its January release should have already been an indication as to how widespread a fanbase this was ever likely to accumulate.  Fun for a blast, the brief campaign is elongated by extra characters, but I doubt many will want to keep plugging away at the same enemies for long.  Hopefully the multiplayer side of things receives the attention the art design deserves as it’s got cult appeal written all over it.

There's an addictive quality to the no-frills combat, and though there are only so many ways to reduce someone to a gooey blob of liquified remains, the game's lack of obvious pretentions means it's easy to embrace the sheer garishness of it all and the potent mindless carnage.