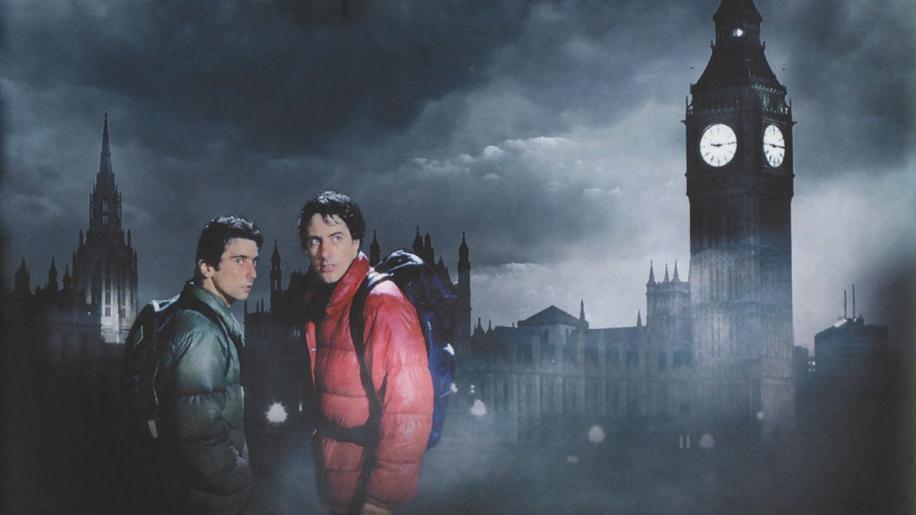 The film has been reproduced in an enhanced 1.85:1 ratio that preserves its original theatrical aspect. Although print damage may be kept to a minimum - with only a couple of frame judders and the odd speckle and fleck to mar it - the overall image is, unfortunately, often mushed-up-to-the-gills with grain. The opening titles, with their views over the moors (Wales in reality and not Yorkshire) are an appalling mess - blurry and completely lacking in definition. Things brighten up with the arrival of Jack and David and a truckload of sheep, but the picture never loses its thick layer of grain, nor gains much in the way of clarity.

Black, so vital for a horror film of this nature, are not too grand, either. And, whilst colours are fairly decent -particularly the rich flowing blood - skin-tones lack a healthy sheen, and I don't just mean the decomposing flesh of poor Jack. Compression errors don't appear to blight the transfer, though. But, even if they did, it would be hard enough to see them amid the squalor and murk of the picture, itself. Backgrounds are never very distinct. Check out the view across the Thames when the wolf stalks the tramp trio - even the red neon is jumbled up. Close-ups, however, are much better presented, with the transformation's popping flesh looking very interesting, indeed.

All this sounds pretty terrible, I know. And it certainly is if you are watching on a big screen. On a 32 inch, things fared far better, I have to say. And, to be honest, you would be hard-pushed to find a better version. The R2 release is similarly treated. Well, things do improve considerably with the re-vamped audio. American Werewolf has both DD 5.1 and DTS 5.1 tracks to boast. There really isn't that much to choose between the two, actually. Both offer a great, though mainly frontal, sonic assault, with a good degree of separation, solid bass levels and crisp, clear dialogue. The rears are employed to bolster the very British inclement weather, with pretty good reproductions of the thunder and the rain, nicely bubbling ambience in the hospital and on the busy London streets. The train ride amid the punks is quite impressive and the chaos in Piccadilly Circus is robust, meaty and dangerous-sounding - that bloke getting tossed out of the bus and then squished under a car sounds truly horrible. The howling on the moors, and the snarling and growling of the beast as it circles Jack and David delivers a neat trick of travelling around the soundscape, speaker to speaker but, I feel, still misses the opportunity by not quite completing the circuit.

The gunshots that fell the first werewolf are well doled-out, blasting out at you from the right and left front speakers. Elmer Bernstein's creepy score is effectively rendered, too, with immersive depth and clarity.

Of the two tracks, I would recommend the DTS as, to my ears, it sounds just that little bit deeper, wider and more aggressive. Starting with David Naughton's and Griffin Dunne's Commentary, the jokey spirit and fun atmosphere of the production is quite vividly recalled. The pair certainly have a good time watching their own on-screen antics and there is plenty of mileage made out of Naughton's enviable intimacy with Agutter. On the downside, they sometimes appear quite forgetful - then again, it was a long time ago - and have a tendency to kick back and just watch the movie for lengthy spells. Still, it is nice to hear the pair reminisce. Listen to Dunne trying to describe the SAS training along the Brecon Beacons - “the British stormtroopers,” he calls them. Another interesting snippet is that Cat Stevens refused to allow his song Moon Shadow to be used in the movie, because he actuallybelieves in the existence of werewolves.

The brief (5.13 mins) Making Of is pure nostalgic EPK. Made at the time of the film's production, it reveals Landis to be a garrulous, yap-happy guy who is actually much hairier than the werewolf. There are some nice contemporary shots of Naughton undergoing his latex coat, some brief behind the scenes stuff and a little buffoonery with Landis's cameo stunt work during the Piccadilly Circus carnage. Not bad for a vintage glimpse.

The Interview with John Landis runs for 18.17 mins and is directed by Adam Simon and filmed on a very atmospheric set full of props and waxworks. Some from the movie. Here, Landis reveals the genesis of the screenplay that he wrote whilst in Yugoslavia working on Kelly's Heroes back in 1969. Still just as hairy and off-the-wall, his sense of humour and genuine enthusiasm is infectious, if a little OTT. As interesting as he is, I doubt very much that I could stay in his company for too long. Some of the clips used (and there are a great deal, but they are well-utilised to emphasise his points) actually seem of slightly better quality than the image on the disc, itself. Despite his insistence on having very realistic violence, he says of the transformation that it is “essentially an erection metaphor.” HUH? Very candid and ribald throughout, he recalls Maggie Thatcher's dislike of youthful hooligans, and waddles through a terrific joke at the end.

In Rick Baker's Interview (11.12 mins) he says how he wanted to create a bipedal monster, like the ones he grew up watching, but that Landis preferred the hound-from-hell look that we see in the final film. Based loosely (thank God) on Baker's own dog, Bosco, the monster is shown in some fantastic test and unused footage, and I have to say that it looks utterly brilliant - even shuffled along on a wheelbarrow. We see it stalk around a corner in the subway in a shot that I wish they'd kept in the film, and plenty of extras from the rampage through the streets of the capital. God, I love that wolf! The little bit of wiggly flesh hanging from Jack's ripped throat gets a special mention, too. More top stuff. Baker well and truly deserved that Oscar.

In Casting The Hand (10.53 mins) we are treated to some archive footage of David Naughton having his arm cast in foam latex and alginate for the great FX of the hand-into-paw shot. We appreciate the time limit on manipulating the substance before slapping it on and leaving it to dry. It is a thoroughly messy process and it takes some considerable effort to get his hand back out again - but just look at the results. Landis is on hand, too. On hand - geddit? Oh, never mind. This bonus has received a fair bit of flack from reviewers in the past for being boring. Yep, maybe it is. For some. Me, I love this stuff.

Then we get three minutes of Outtakes that feature some Landis stunt work on the careering London bus, a bouncing severed head take, application of blood to the wolf's fangs and the stab wounds on Agutter and some crew hi-jinx. But, the piece-de-résistance has to be the unusual, and silent, mock interview with Landis on-set, when the walls fall down around him to reveal the naked cast of See You Next Wednesday romping in the background. Nice gimmick.

Then there are the storyboard to film comparison detailing the climactic chaos (2.25 mins) and the photo-montage (3.42). This cool selection is set to Elmer Bernstein's score and comprises colour and black and white stills from the film, itself, together with cast and crew portraits and makeup application. Nice - it's also the only to way to appreciate Bernstein's haunting score away from the film, as it has never yet been released. I'm not counting the recent double CD appreciation of Bernstein which features two cues that weren't even in the film!

And finally we get some Production Notes and selected Cast and Filmmaker Biographies for Naughton, Dunne, Woodvine, Agutter and Landis. Oh, and some movie recommendations and DVD-Rom gubbbins.

Overall, this is a pretty decent selection of bonuses that reveal a respect for the movie and certainly add to the package. It's worth it for the extra wolf footage alone. A rare thing indeed. American Werewolf succeeds both as a comedy and as a terrific horror film. The opening scenes on the moors are a supreme example of likeable people facing horrific circumstances, the perennial fear-flick staple of there's something out there working the senses overtime. The FX are wonderful, the gore a vivid and nasty delight - let's face it, you just can't have a werewolf film without ferocious disembowelling and throat-ripping, can you? - and the characters are well-drawn and reasonably credible. Still got some lingering doubts about the extracurricular care afforded tourists by the NHS, though.

The Slaughtered Lamb has made it into horror film history, if not the Good Pub Guide, the London Underground has never been better employed as a terrifying setting - Creep, pah! - and the whole Thatcherite era of Great Britain is splendidly evoked. And it took a yank to do it. David's tragic tale is etched with comedy, cruelty and pathos and, if the film has a peculiar only-half-completed vibe, then I feel this only adds to its atmosphere and notoriety - you simply don't want it to end.

Although the picture is nowhere near as good as it could be - instead of showcasing the butchery with grisly aplomb, it tends to obscure much of Baker's sterling efforts - the DTS makes a fair old stab at widening up the soundfield. A definite steal at it's current rock-bottom price. Without a doubt, the best filmed treatment of werewolfry so far, and it surely belongs in any horror buff's collection. All together now, “Blue moon ... you saw me standing alone ...”