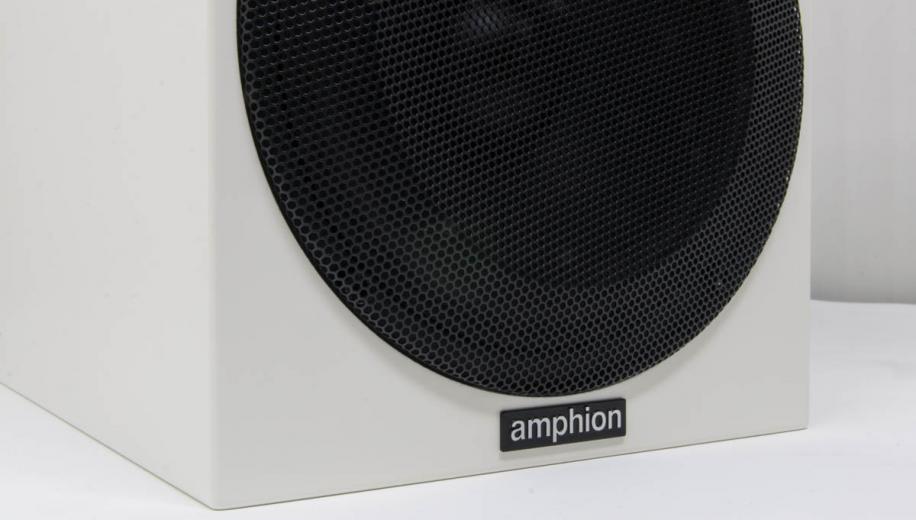 The Amphion Helium 510 is a two way standmount speaker. Browse the specifications (of which more in a bit) and nothing is going to leap off the page at you. The Amphion is, on the face of it, a fairly conventional bit of industrial design. You might even take a look at the £720 asking price and query why it is - again, we’ll cover that in a bit too.

The reality is that the Amphion is rather more interesting than the specifications suggest and the product of a company that is itself a little different from many rivals. Amphion is unusual in that they have reversed a frequently seen trend of speaker brands starting in the professional arena and then going domestic. They instead started making domestic speakers and have proceeded to enjoy a fanatical following with their professional offerings

Of course, history and brand story are great but you have to deliver on the day to day business of sounding good too. Is this little standmount speaker a modern classic that balances the accuracy of the pro world with the refinement of the domestic, or just another bookshelf? Time to find out. Almost every review will find itself making extended use of a particular word. In the case of the Helium 510, that word is ‘waveguide.’ So, before we begin and use this (satisfying to say, if nothing else) word to within an inch of its life, what is a waveguide? Simply put, it is an indentation in the cabinet into which a tweeter is placed. Its purpose is something that varies from brand to brand but, in essence, the idea is to direct and control the output of the tweeter. High frequencies are fickle things and by giving them a helping hand, the waveguide ensures that they deliver a more even and consistent performance.

For Amphion, waveguides matter. There has never been an Amphion speaker without them and, in the past, when I’ve inquired about how they calculate them, I’ve been told that they are sufficiently instrumental to the overall performance that there’s no way at all they’re giving much away. Suffice to say that the shape and depth is emphatically not chosen by chance or for aesthetic reasons.

The tweeter at the centre of the waveguide is a 25mm titanium dome, protected by a small grille. This is almost a standard fitment across almost every Amphion speaker. It is joined by a 130mm doped paper cone - a slightly unusual but not unheard of combination and one that also makes up the rest of the Helium range. The unusual aspect of how these drivers are implemented is down to the presence of the rear port. This isn’t an unusual fitment but Amphion ensures that the flow relationship to the mid bass driver is maintained by placing the port directly behind the bass unit.

These two factors are combined with a relatively narrow and deep cabinet to give the Helium 510 a fairly distinctive aesthetic that is largely governed by functionality. The most notable operational quirk of the design is that, thanks to the port being on axis with the driver, the terminal panel sits at the top behind the waveguide which looks a little odd but shouldn’t make any real difference when the speaker is in place. The combination of drivers and ports give the Helium 510 a quoted frequency response of 48Hz- 25kHz and a given sensitivity of 86dB/w which is perfectly in keeping with what you might expect from a cabinet of this size. The sensitivity figure is worthy of further comment because I feel it is a little on the pessimistic side and the Amphion shouldn’t be considered harder to drive than anything else at the price point, and you can realistically get away with something like a Rega Brio if you wanted to but that would about the minimum.

One area where Amphion has to be commended is the thought that has gone into some aspects of the design. The first is that while the review pair is black and white (and I have to say, much as I’m never going to love white speakers, it looks really good), you can also have black, completely white and white with black grilles (but a white waveguide insert). Then, if that wasn’t enough, you can specify the grille and waveguide indent in grey, red, blue, turquoise, violet, green, yellow and - yes - brown. The clever bit of this is that having too many versions (SKUs) of a speaker is a big issue for companies. By having two colours and then changing the trim details. Amphion gives you a bewildering amount of choice without suffering from this.

Neither does the clever thinking end there. The Helium 510 has the option of a full grille to cover the complete frontage of the speaker if you want and an optional wall mount that can be used to avoid guessing what aftermarket model might work. One final interesting feature is that as far as Amphion is concerned, the Helium 510 is sold in single units for people who aren’t fond of dedicated centre speakers, this offers the chance to have identical speakers in every (non height) position in an AV setup. Not all UK dealers have this option listed but it does seem to be there. No less importantly, the Helium 510 is really beautifully made. There’s nothing showy about how it is has been put together but everything feels solid and considered and likely to work indefinitely.

How was the Helium 510 tested?

The Amphions have been used primarily with an ATC SIA2-100 integrated amplifier and a NAD M10 all in one system, both of which have been used with an IsoTek Evo3 Aquarius mains conditioner. Source equipment has included the SOtM SMS-200 Neo running as a Roon endpoint into the ATC, an LG 55B7 OLED connected via optical and HDMI ARC and a Michell Gyrodec running into an AVID Pellar phono stage. Material used has included FLAC, ALAC, AIFF and DSD with on-demand and broadcast TV as well as some vinyl. Let’s start with a matter of personal preference. I understand the appeal - on paper at least - of using a pro audio speaker for domestic purposes. In a strictly multichannel environment where their role was solely for film soundtracks, I would even consider doing it myself. For two channel audio though, the very idea of it founders on the quality of the music that makes up an average music collection. A true monitor doing the job it is designed to will make it abundantly clear that Break on Through by The Doors is - even judged by the standards of 1966 - a track recorded in a hurry on fairly indifferent equipment. That, after all, is its job.

On the assumption I know this already, I don’t really want to be reminded of it each time. I simply want to enjoy it for what it is. The Amphion is a fascinating counterpoint to the idea of a monitor because it is has crossed over from the other direction - domestic to pro. The way it handles Break on Through is indicative of this whole ethos in two minutes and twenty-eight seconds. The Amphion manages to accurately point out the limits of the material at hand but the manner in which it does so is so apologetic that you largely won’t care. The Helium 510 is one of the true masters of balancing what you need to know with what you don’t.

Working out why this is the case is not completely straightforward but there are some clues in the design. First up, that waveguide really does work. The Amphion is fairly unfussy about placement but if you do give it a little attention, it images beautifully. There isn’t a sweet spot to the presentation but instead a sofa sized area of three dimensional cohesion that manages to offer both a seamless stereo soundstage from left to right and the perception of depth too. It is rare to find a small speaker that is as happy generating such a large image and what is no less impressive is that you have to be, say, pretty much on top of them before this imaging space collapses. The bass response is also notable. The Amphion doesn’t have more bass than most similarly priced and sized rivals but it’s the speed it offers that sets it apart. To listen to the Helium 510 deal with something fast and deep like The Prodigy’s Get Your Fight On is to have you wondering why the arrangement of the port right behind the driver isn’t more common. Provided that you give them a few centimetres (in practice, about 15 or more) from a rear wall, the Amphion rewards with an impressive level of clout and no hesitation while it does it.

And more than any of these things, it’s fun. That speed and cohesion isn’t something that solely works when you’re at the whistles and glowsticks end of the BPM spectrum. It’s the ability to make any piece of music flow in a way that makes it utterly self-explanatory that is to be celebrated. With a track like 2BU by Wild Beasts that inverts the track around the percussion in the opening minute, the effect with many speakers can be jarring and somewhat unsettling. Here, it manages to make perfect sense on both sides of the inversion. There isn’t anything I’ve thrown at the Amphions in their time on test that has truly unsettled them.

The performance with TV material is no less effective. I binge watched the entire ridiculousness of Netflix’s Hyperdrive with the Amphion in situ and they did a fine job of capturing the impressive death ride of the eventual runner up’s Nissan. That unforced ability to create a ‘sweet space’ lends them an immersion that isn’t always available in stereo viewing and their consistent ability to ensure that dialogue is clear and easy to follow means that when you do watch something where the dialogue is of more than passing relevance, the Helium 510s hold their own.

So, what’s the catch? Depending on how you intend to use them, there genuinely might not be one. The Amphion’s ability to deliver the contents of a recording comes with the ability to tell you what the electronics are up at the same time. This means that while they can be driven on the end of relatively low powered equipment, it will show up the limitations present. On the end of the ATC amp in particular - the Amphion has delivered excellent performance and the NAD is barely less effective. If your electronics do have some traits you aren’t fond of though, it is highly likely that the Amphion will let you know about it rather than curing them. Like a good few speakers we have looked at in recent months, the Amphion is not a shortcut to greatness in any situation. The Helium 510 is one of the true masters of balancing what you need to know with what you don’t.

A week with the Helium 510 has been a very pleasant experience. It is always pleasing to see a company go their own specific way in the creation of a speaker and, in turn, for those decisions to so clearly pay off in performance terms. The Helium 510 isn’t a cheap speaker, it’s built in the EU and that is reflected in the cost. It also demands decent quality partnering equipment to deliver its best. If you can meet its basic requirements though, the Helium 510 is a genuine star- a speaker that brings a few of the attributes of pro audio to a domestic setting with pretty much none of the downsides. If you can meet their simple but specific requirements, this is an outstanding speaker that comes highly recommended.