Warning, this film was made by twin sisters with some serious issues. 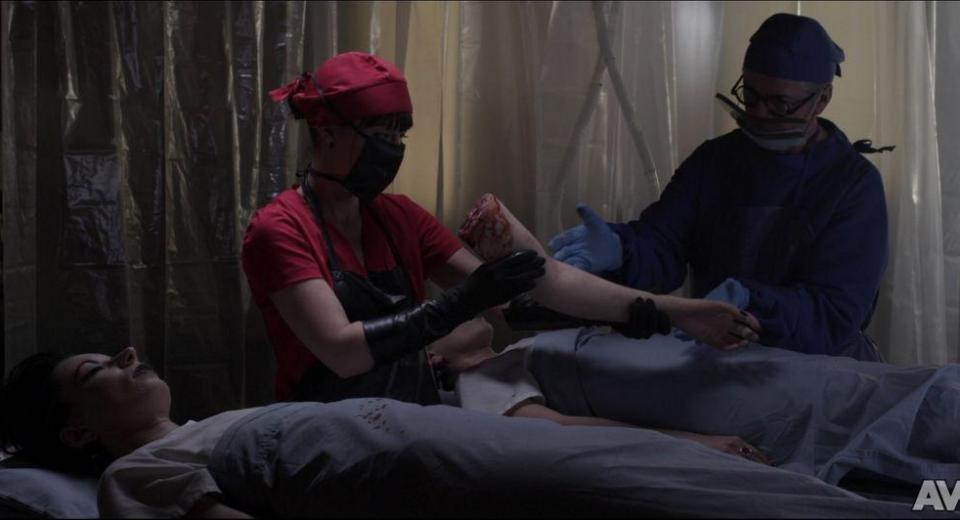 Warning, this film is about gruesome human mutilation, bloody murder and sadistic torture, all carried out by a medical school student.

There, that should have your attention!

Actually a truer statement might be “Warning, this film was made by twin sisters with some serious issues. Mommy and Daddy have lent them some money in the hope making this movie might be therapy”. Torture horror is nothing new, with Saw being one of the better known, but when it moves into torture porn, quality can be reduced as the graphical scenes become the major driver. Although visually this film looks extremely good for the budget, I am not convinced by either the story or some of the direction. It may not be as bad as the laughable Teeth, but I really do not get the hype surrounding it.

The Soska Sisters are a couple of thirty something Canadians and the self-proclaimed “Future of Horror”. God help us all. This dark tale is designed to shock with its subject matter, but fails to deliver in terms of real hide-behind-the-sofa terror or really gruesome, blood thirsty horror. This film has content covering consensual body modification, genital mutilation, murder and date rape. Not really recommended for watching with Granny then, unless she enjoys nothing more of a Sunday morning than being strapped to a table, knocked unconscious and having bits of her anatomy cut off. Done well, this could be a truly shocking movie, revelling in the seedy world of physical torture and underground medical procedures. What we get is a fairly messy story where the plot is secondary to the next shocking set up. Their second outing might be a little more polished than the first, but that really isn’t saying very much. I was as intrigued as anybody else when I heard about this movie, after all who would not have some morbid fascination with such dark subject matter?

Mary Mason (Katharine Isabelle) is a broke med school student, needing money to keep her head above water. She answers an advertisement to work in a strip club but instead of just lap dancing, her surgical skills are spotted and she is offered a much more lucrative job fixing up a seriously injured guy who has been beaten to a pulp by the club management. This job leads in turn to an introduction to the body modification community, with her first patient wanting some “Excess skin” removed to desexualise her so she resembles a Barbie doll. Her blurred, waxy looking body without visible sexual organs or even nipples becomes a body modification community internet hit and the work starts to roll in.

These first cutting scenes are nothing short of pornographic and rather typical of female directors and writers. Witness the minutes of mainly full frontal nudity in Sleeping Beauty and whereas that is very vanilla and pseudo-erotic, American Mary is almost as hard as even an 18 film can get in the UK and although there is less nudity – a few brief scenes here and there, what you do not or cannot see is so strongly hinted at that it might as well have been shown. There may not be a lot of blood, but this will be the least of your problems.

Mary’s new found wealth does not go unnoticed at med school and her professor (David Lovgren) making the assumption she has turned to prostitution to pay her bills, invites her to a perverted sex party with his fellow surgeons. Not realising the danger she is in, she attends and is soon drugged and violently raped by someone she thought to be her mentor. Retribution however, is swift and her attacker is soon in very serious trouble. Of course, Mary now quits medical school and her progression to the dark side of back street surgery is complete.

Now here’s the problem: Why would a quiet, unassuming girl suddenly turn to such violent measures and also go to the lengths she does to exact her revenge? Her character is not consistent and simply impossible to understand. The double trigger of the rape and first body cutting is simply unconvincing and the movie fails on this point straight away. We know she has no close living relatives and is something of a loner, but it still does not ring true. The doctors are even less convincing, coming over as predatory psychopathic drugged up rapists by night and caring professional surgeons by day. Again, it’s the abrupt character switch I have issues with. Katharine Isabelle is no stranger to sexually explicit horrors and no doubt, it was her track record that brought her to the Twisted Sister’s attention. A shame they did not explore her repertoire a little further to find out she does not “do” sex scenes or nudity and is obviously very uncomfortable in some scenes in this movie. At least they found plenty of freakish actors to fill the nastier roles. Tristan Risk is a burlesque and horror flick star who plays tiny Betty Boop stripper and body modification addict Beatress. Quite what Paula Lindberg got out of becoming a Barbie doll is not clear, but her role is relatively small and her features so smoothed and obscured, many will not recognise her in any case.

With Mary now deeply embroiled in both hacking bits off both her attacker and her unconventional clientele, it appears she also has some most unsavoury friends who would do anything for her. A nice bloody murder follows, but the police do not get on her trail until the disappearance of her ex mentor comes to light. This is a distraction the film really did not need. As a story line it does not go anywhere and feels like padding. The weakest locations also appear around these scenes suggesting they were something of an afterthought.

The Soska Sisters obviously had not got enough of their blood lust out of their system and make an appearance in the film. The highly unconvincing accents and even less credible modification surgery make for some unintentional comedy, but not a lot else. Maybe Daddy’s money was running a bit short at this point, or maybe they truly want to explore this strange perversion more intensively.

More violent scenes follow, one or two that might make you jump, plus a few that might cause you to want to retch. To be honest though, it is more the shock about the content and depravity than the actual on-screen gruesomeness that shows through. What is evident however, is the utterly messed up nature of the writers. Despite all their talk, they are obviously much too self-obsessed to follow their desires and go through any procedure themselves. I would image the Body Mod community are not totally convinced with this movie, despite their involvement. From what I can gather, they tend to be free spirited, open people who enjoy public displays of what they consider to be their body as an art form. What we have here is very much darker and suggests an underworld of depraved and unhinged individuals lusting after the pain and sexual highs from unconventional surgery. The only nod to the open community is a short section where real “Modders” show off their injuries and enhancements.

The end of the movie is just as bloody as the start. You sort of guess what the end could be, but the actual dispatch is rather low key, even if the perpetrator is unexpected. A definite ending on a whimper rather than a bang. Much more could have been made of this, but maybe the talent had had enough mindless violence by then and needed a softer ending.

This sort of movie will always polarise opinion. Superficially it is a gory, violent, sexually explicit movie, written and directed by twin sisters. This alone will give it some form of cult status, but dig deeper and the lack of decent story, poor dialogue and dearth of jump-out-of your-skin scenes becomes apparent. Bearing in mind the relatively low budget and short shooting schedule, the film does feel very well made, with decent effects and convincing prosthesis, but this is not enough to save it. There are much better, more intelligently written horrors – films like Excision, that do not rely on just shocking content or explicit sexual activity for their ability to really get under the skin. Female horror directors are quite rare and twins even more so. There will be significant interest for this fact alone, but I can’t help feeling the hype is greater than the film itself. My fascination is satisfied, this film does not deliver the goods for me but I know many will disagree.