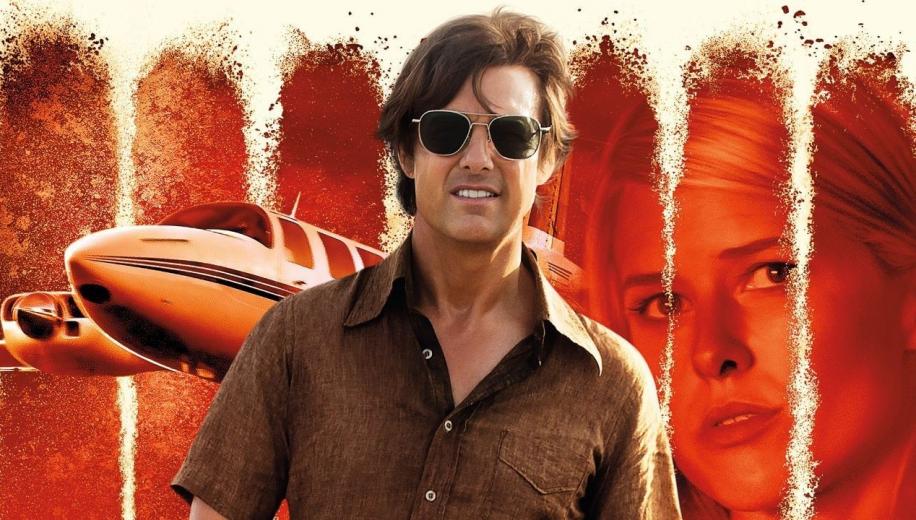 Doug Liman's re-teaming with Tom Cruise after the excellent Edge of Tomorrow is a very different animal, giving the star a genuine character to get his teeth into.

American Made is the true story of ex-TWA pilot Barry Seal, who got involved with both the CIA and drug lords gathering intelligence and running both guns and drugs, was paid fleeting lip service by the excellent Netflix show Narcos, but is certainly outlandish enough to justify a full length feature, with the larger-than-life story of this surprisingly lucky entrepreneur so over the top that, if it weren't based on true exploits, it would be impossible to believe. What's almost more surprising though is the casting of Hollywood hero Tom Cruise, who has basked in the rays of an good guy-centric career, as this morally flexible southern boy - a character you may find hard to hate, but who you will also find hard to like too.
Director Doug Liman, who had enjoyed gritty, hand-held success in The Bourne Identity, delivers a colourful breakneck ride through the highs and lows of the wild The Wolf of Wall Street-style life of Seal, and gives Cruise some of his best material in years. Sure, it was nice to see a weaker (albeit initially) side to the normally heroic action star in Edge of Tomorrow, but eventually he reverted to classic Cruise, whilst here he's actually fully embracing a character, complete with attitude and unlikable characteristics aplenty. And with a fast-paced narrative and some aerial sequences that will make you think Top Gun 2 may not be such a ridiculous idea, American Made is an engaging watch. Shot digitally at 2.8K, the film is unfortunately technically restricted by a 2K digital intermediate, although the results are still pretty dazzling, even if the colour scheme is wildly over the top, and almost painfully so. Interestingly, American Made was released in some countries in a wider 2.39:1 aspect ratio, but the original and (presumably) director's favoured ratio is the fuller screen 1.85:1 aspect ratio which it is delivered with here, opening up the top and bottom to provide a broader view than that which would have been seen in the wider scope. Arguably this costs the film a more classically cinematic edge, but it better suits the director's handheld, freewheeling style.

Despite the ostensible restrictions of a 2K DI, American Made actually boasts some frequently striking detail, both in the close ups and the broader shots, affording impressive examination of the core characters, as well as loving adoration of both the polished planes and the gorgeous scenery, providing something of an upgrade over the Blu-ray, even if a simple pixel-counting exercise may not yield a mathematically impressive result. Still, as is often the case with Ultra HD Blu-ray releases, it's the HDR and WCG implementation that really makes the difference, and certainly here the American Made Ultra HD Blu-ray release leaves its standard Blu-ray sibling in the dust.

On the plus side this means a much brighter, more intense and more vivid image, which celebrates its sumptuous vistas and makes the most of every possible opportunity to shine both in terms of colour and contrast. On the down side, it goes a little over the top, taking the obviously intentional 70s/80s period style and tweaking the orange levels too far, yielding a blisteringly hot image that gives it a slightly unnatural edge. Now, first time viewers may be content writing this off as suitable for the period style, and for the most part that's correct - at least in terms of the origins of this particular look - but the ramped up WCG is pretty unforgiving and may put off some. If you can look past it then it works for the piece, and the gorgeous cinematography upscaled to 4K with all the accoutrements delivers picture postcard scenery images that are utterly jaw-dropping and resolutely demo. Even if you're not quite sure where you fall down on the visuals or the style adopted, there's absolutely no doubt about the quality of the audio, with a storming DTS:X immersive HD audio track founded upon an already reference DTS-HD Master Audio 7.1 core which delivers the key ingredients - dialogue, score and effects - with power and precision.

Dialogue remains firmly prioritised across the frontal array, taking precedence over the remaining elements where required, and delivered with clarity and coherence throughout, whilst the punchy score affords plenty of material for the surrounds, providing an engaging and energetic array of often period song tracks - which are the mainstay - blended in with occasional score flourishes.

It's the effects though that frequently dazzle and, in particular, the numerous aerial sequences. Sure there's some gunfire - sometimes even heavy artillery - punching across your living room and tearing chunks out of your walls, but it's the prop planes (and, eventually, jets) roaring around the skies that draw you right into the film, feeling the intensity of the overweight takeoff sequence, the threat of an engine down or the craziness of the 'emergency' landing. American Made, despite its obvious positives, remains a subtle dry run attempt at putting Cruise back in the cockpit prior to the rumoured Top Gun sequel, and it's very effective with the star clearly having a blast roaring around the skies in a plane at hundreds of miles per hour. The track is easily demo and reference through and through. Following the disappointing norm, American Made's Ultra HD Blu-ray disc itself remains bare bones, with none of the extras from the accompanying Blu-ray disc ported across. On the plus side there's a nice - though not exactly feature-packed - selection of extras.


A nice selection of extras

The majority of the supplemental features are Featurette-based, with each running at around 5-6 minutes in length, with American Storytellers looking briefly at the setup, Liman and Cruise, and the tale of Barry Seal, whilst the Cruise & Liman: A Conversation Featurette further develops this, offering an overview of their work together on the film; In the Wings looks at the supporting cast and characters; Shooting American Made focuses on the exotic locations; Flying High is a highlight looking at the aerial work; and The Real Barry Seal has the character's son talk about the life of the real man. The disc is rounded off by 10 minutes of additional Deleted Scenes, with optional Commentary from Liman. Top Gun 2 may not be such a ridiculous idea

American Made is that relatively rare production that manages to get Cruise to play an actual character, rather than a thinly veiled version of himself, and Doug Liman's fast-paced biopic is a fun, lighter and slightly less amoral than The Wolf of Wall Street, with the Ultra HD Blu-ray release making the most of the stunning cinematography by providing demo video and capitalising on the aerial sequences with a tremendous immersive DTS:X audio track. The package is rounded off by a few nice extras on the accompanying Blu-ray disc and is worth checking out.