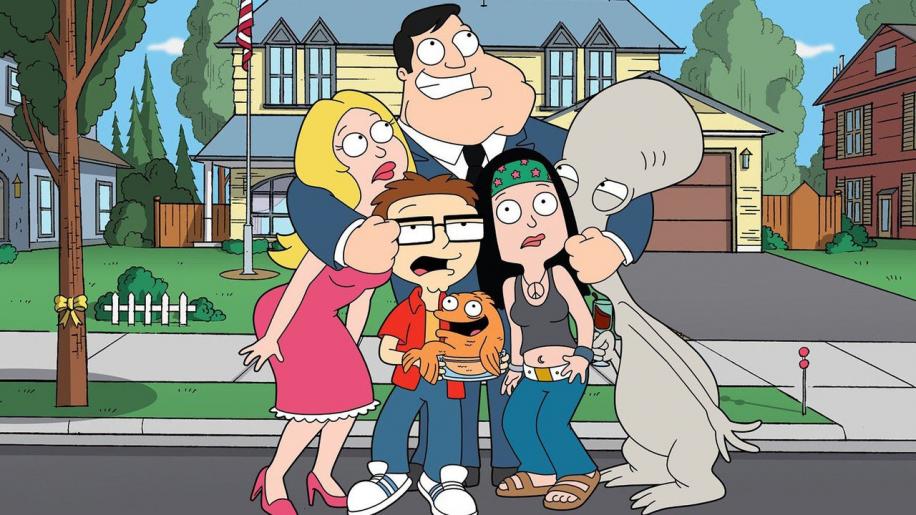 American Dad! is presented in a 1.33:1 aspect ratio non-anamorphically enhanced fullscreen transfer. The line detail is generally excellent, the picture clear and completely free of softness and grain. The colour scheme is quite broad, the palette full of bright greens and pinks and lively tones. Blacks are reasonably solid and allow for decent shadowing and night-time sequences. Overall the picture looks as good as its counterparts Family Guy and The Simpsons have ever looked. American Dad! comes with a Dolby Digital 5.1 track, which is pretty unusual for this kind of animated TV series. Unfortunately, realistically, it is just a glorified 2.0 effort with little backup from the rears. The mix comes predominantly from the frontal array, with clear and coherent dialogue, a few nice effects noises and a fun, boisterous score that is marred only by a terrible opening theme song. It's all perfectly in-line with the production but, for a six-speaker effort, it is slightly lacklustre in terms of rear action. First up we get Audio Commentaries on twelve out of the thirteen episodes included here (the first episode after the pilot - 'Threat Levels' - is the only one without), with audio offerings from series Creators, Directors, Writers and Cast Members. They talk quite humorously about the show, often laughing out aloud - understandably so - at their own creation and discussing the topical comments that the show makes, sometimes subtly but - more often than not - fairly bluntly. It is nice to have so many episodes with commentaries, marking the highest commentary-to-episode ratio that I have ever come across for a TV series DVD release.

All of the other extras reside on the third and final disc. There's an 'All in the Family' - Creating American Dad! Featurette that lasts 20 minutes and has plenty of interview comments from the crew and contributors, including creators Seth MacFarlane, Mike Barker and Mike Weitzman, along with Seth's sister Rachael MacFarlane (who voices Hayley), talking about how topical the humour is, how they tried to make it different from Family Guy and how popular shows about 'unusual' American families are. There are a few too many clips from the finished product but we do also get some brief split-screen moments where they show the cast recording the scenes.

'Secrets of the Glass Booth' takes us behind the voices of American Dad! and spends six minutes looking at the vocal talent involved in the production. The creators talk about the characters that they invented and discuss the vocal actors who were chosen for the various parts, with respective interviews from them. Seth MacFarlane himself took the lead role of Stan, Dee Bradley Baker plays Klaus, the twisted German goldfish, Rachel MacFarlane plays the liberal daughter Hayley, Wendy Schaal is the wife Francine and Scott Grimes is the teenage son Steve.

The 'American Animatics' Feautette lasts fourteen minutes and shows us some of the test animatics behind the series, allowing us to watch comparisons between the animatics and the final episode footage, with some of the best clips from across the season. The animatics are black and white sketches, but they are fairly well drawn, quite detailed and accurate to the final versions.

'How's your Aspen?' is a Featurette about the American Dad! performances at HBO's 2005 US Comedy Arts Festival. We get a twenty-five minute look at the Festival, focusing mostly on the Table Read that the cast did to promote the show. The Featurette is mostly in the form of a video diary of the event, with everyone putting in a few soundbites, but the highlight is supposed to be the read-through and it actually turned out to be a bit disappointing. Not only is the split-screen format too small to actually see the vocal actors contributing, but the end result is not a great deal different from just watching the episode normally.

We also get no less than 42 Deleted Scenes, strewn across the first season but all present on the final disc. Totalling seventeen minutes' of extra footage, most of the scenes are just extended (or alternate) sequences, with only a few real gems that should have been left in, like the Saddam Hussein-at-school moment and the extra bits with the smart-talking alien, Roger. The scenes are slightly poorer in quality, with iffy line detail and only vocals - no effects noises - but it is still well worth running through all of them.

Finally we get a bonus disc which is a sampler of Family Guy material, including 24 Deleted Scenes and a few Featurettes. American Dad! is a tremendous new animated show to follow in the footsteps of the great masters like The Simpsons. Thoroughly entertaining, here we get the excellent complete first season, with thirteen episodes that should have your sides splitting. The picture quality is very good and the audio is decent for this kind of release (if disappointing for a 5.1 track) and with a bunch of interesting extras, the package is well worth picking up for fans and newcomers alike. Highly recommended.