"1,300 habitable systems on the other side of those rings. It's going to be another blood-soaked gold rush." 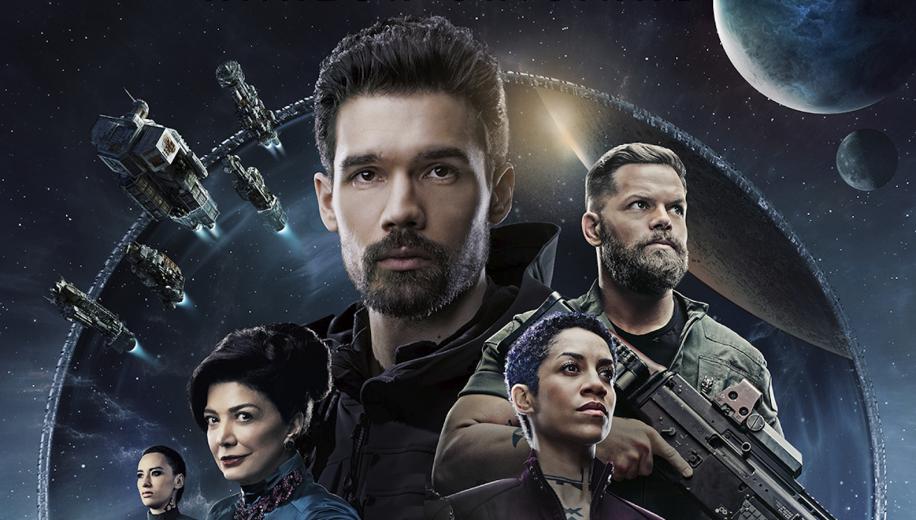 A flagship vehicle for hard sci-fi, the adaptations of James S. A. Corey's epic series of books continue to impress with their scope, scale and expansiveness.

What started as an ostensibly simple missing persons case for Thomas Jane's police detective Miller - his investigation intersecting with the path of an ice hauler commanded by EO Holden (Steven Strait) - soon turned into a futurescape Cold War standoff between three conflicting factions: Earth, Mars and the Belt, with UN officer Avasarala (Shohreh Aghdashloo) desperate to prevent a full-scale war.

Over the course of two and a half seasons, the war brewed, shots were fired across the bow; Holden got a new ship and forged a bond with a tight-knit crew; Miller kind-of found who he was looking for too, and forged his own bond, transcending the human plain for a higher consciousness; and eventually a greater 'threat' emerges in the form of a ring which could be a weapon designed to destroy entire planetary systems or could be a gateway to connect through to thousands of new systems. Going full Jack Ryan / Sum of All Fears, Holden determined that the only way to shut down the defensive response of the ring was to power down the weapons trained on it, eventually persuading the entire collaborative armada - with weapons trained on the alien/future artefact - to do the same. Once done, the ring suddenly unlocked all the other rings, and therein lie multiple gateways to other systems. The future's ripe with possibilities, but also laden with threats.


The game-changing developments at the end of Season 3 could have only led to something more epic, but Amazon's The Expanse embraces this

Ever since the ring-gates opened up, policing what goes through them has been untenable, with refugee ships running the gauntlet to try and escape to another world, and nobody really having a clue what lies on the other side anyway. As the months pass, Holden and his crew travel to a colony on a world dubbed 'New Terra' to investigate what caused a drop ship there to crash, whilst following their own secret agenda fuelled by Holden's continued visions of Miller, soon discovering that these new worlds may harbour their own dangers.


Despite the behind-the-scenes changes - SyFy's cancellation of the series in May 2018 (or, more accurately, decision not to renew it), and long time fan of the book, Jeff Bezos' rescue run to pick it up on Amazon (it's already had a 5th season greenlit) - the show's production continues largely seamlessly, perhaps even undergoing something of an upgrade in terms of its effects and scale. Indeed, the game-changing revelations and developments at the end of Season 3 could have only led to something more epic, but Amazon's The Expanse embraces this, and delivers right from the outset.

Of course, it wouldn't be The Expanse without some element of slow-burn, although we are a long way away from Season 1's almost confused plotting, with this fourth season assured in its unravelling of multiple interconnected strands, that you know are building to something big, exploring Holden's trips to other worlds, mentally partnered-up with "Miller", who is still chasing down leads for his mysterious 'investigation', whilst the three factions continue to rub each other up the wrong way over the increasingly policed Ring gateways (David Strathairn and Cara Gee are still a great OPA belter duo). Frankie Adams' Martian Gunnery Sergeant, Bobbie, is still navigating her own treacherous waters following her controversial - but war-stopping - actions, whilst the UN continues to try and maintain some kind of control all the way from back home on Earth, even though Avasarala knows she's going to have to leave the ground if she ever wants to maintain peace across these New Worlds. And Wes Chatham's Amos? Well he's still operating on a completely different plain to everybody else, and still arguably the best character in the entire show.


Assured in its unravelling of multiple interconnected strands, that you know are building to something big

Making the most of some real locations (rather than blowing the budget on completely CG locations), Season 4 enjoys its Stargate-esque developments on New Terra, adding something suitably mystical and epic to the parallel strife coming from the belter/human colonisation woes (Pacific Rim's Burn Gorman makes for a suitable threat to the peace in the new colony, and his moments with Amos are superb), giving Dominique Tipper's Naomi a slightly protracted health issue angle, but one which is nicely hard sci-fi in origin (her upbringing on the Belt makes it hard for her to deal with work under the gravity of the new planet), and keeping more momentous developments on the other side of the ring-gates never far from focus.

It's extremely well put-together, and amidst the best TV out there right now; certainly top tier sci-fi, thoroughly and comprehensively plotted down to the micro-detail, with a superb script, excellent characterisation - especially considering just how many characters we're playing with now - affording viewers a show which appears to have perhaps even surpassed the work done in earlier Game of Thrones seasons and may stand a better shot at making it over the finish line with Amazon and Bezos behind it. Sure, it's so dense - there isn't a wasted moment here - that you may just want to watch it all again right from the beginning before starting the new season, but on the plus side it'll be well worth it.