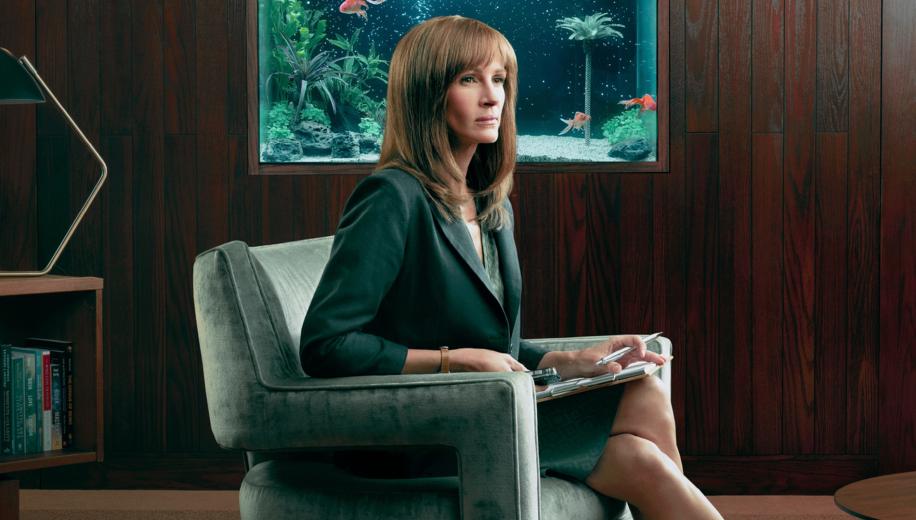 Esmail already wowed audiences with Mr. Robot, taking paranoid conspiracies to another level with his split-focus, split-personalities in that fabulous mystery drama, so Homecoming is not really unfamiliar ground for the man to tread, dealing with a past mystery which - you guessed it - could be part of a bigger conspiracy.


A great little 70s conspiracy thriller wrapped up in a modern bubble.

Julia Roberts plays Heidi Bergman, a waitress who - several years earlier - worked at a facility called Homecoming, a place designed to help veterans reintegrate with society. When Shea Whigham's Department of Defence pencil-pusher, Thomas Carrasco, receives a complaint regarding an old soldier who Heidi assisted, he approaches her for some answers. But her memories of her time at the facility are oddly vague.

As Carrasco investigates further, Heidi's time at the facility unfolds in flashback, and we see her working under Bobby Cannavale's demanding long-distance supervisor, and sit through her sessions with key soldiers, gradually realising that the experiences that she's been through - mostly revolving around Stephan James' sympathetic soldier, Walter Cruz - appear to be so far in her past that she... just doesn't remember them. Esmail's commitment to his work is seemingly unparalleled, and whilst he's busying formulating complex scenarios for his fourth year on Mr. Robot, he appears able to still make time for a 10-episode season of what looks to be an equally frame-specific production, albeit benefiting from shorter, bite-sized 25-30 minute episodes which reflect the format from which this project was born - having originally been a podcast series voiced by a cast of familiar voices.

The story is pure Esmail, even if it was created and written by others (unlike most of Mr. Robot), and the style is quintessentially his, slow-burning the narrative and dropping hints of things not quite right as his cast try to fathom their way through the mystery, often just as out of their depth as the audience is - particularly in the case of Julia Roberts' 'forgetful' caseworker.


For those who enjoyed Mr. Robot, this is definitely one to watch out for.

Stylistically, the whole thing is pure 70s conspiracy thriller - with the flashbacks shot in standard 1.78:1 (complete with 4K HDR on Amazon, if you can find it) - but the maddeningly crazy mystery in the present are shot in a jarring 1:1, and given a distinctly dated look, which almost makes you feel like they are in the past. To add to that, a stroke of genius idea - Esmail elected to use existing scores from 70s conspiracy classics to provide the backing for the entire series, something which undoubtedly further gives the present-set, oddly-ratio'd sequences an even more classic 70s conspiracy thriller feel. Amidst the scores, he reportedly used everything from All the President's Men to Capricorn One, The French Connection to The Eiger Sanction, as well as a number of Carpenter classic synth-scores including that to The Fog and Escape from New York.

It's an audacious move, and it gives Homecoming a very distinctive feel, setting it apart, and turning simple sequences involving looking through files in a giant warehouse or taking a phonecall whilst walking halfway down the stairs into more sinister moments - particularly with Esmail framing his shots exquisitely. Roberts couldn't have picked a better partner in crime to help her jump on the TV series' bandwagon and hasn't been this good in years, enjoying her time opposite a slew of strong players, and revelling in the duality of the role(s) she's called upon to play.

For those who enjoyed Mr. Robot, this is definitely one to watch out for; a great little 70s conspiracy thriller wrapped up in a modern bubble.