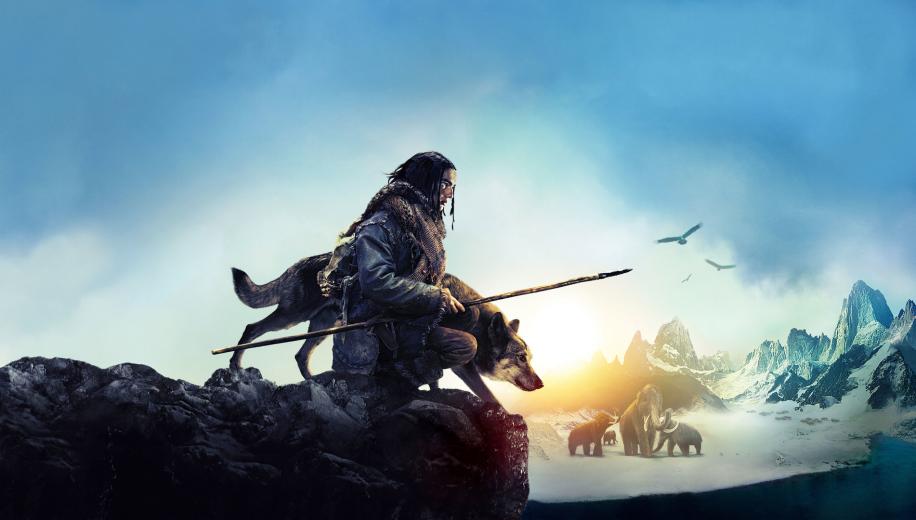 Journey back to the last Ice Age with this visually stunning and actually surprisingly effective survival adventure.

Director Albert Hughes fashions a strong period feature here, making his solo directorial debut having delivered a number of decent films like From Hell and Book of Eli with his brother, who then went on to make his own solo debut with 2013's Broken City. The core is ostensibly very familiar - a tried and tested coming-of-age tale, only it has been reframed here 20,000 years ago, to an almost alien world of tribes and natural terrors, where animals are either predator or prey, but where all of that is about to change.

Keda is a young teen, who qualifies for a graduation hunt which goes awry, seeing him left for dead. Forced to weather the icy storms, fend of myriad predators and cross vast, unforgiving territories, Keda struggles his way home, finding unlikely companionship in a former enemy - an attacking wolf he wounded who was left behind by his own pack.

Alpha's most striking asset is its visuals, with some breathtaking cinematography that leaves many of the stunning shots freeze-frame picture postcard in style, like some perfect screensaver image. It's not just the gorgeous sunsets or Northern Lights either; not merely the landscape shots that draw your attention, but even little things like the focus on the fur, bringing the whole visual side to the film to striking opulent life. The language too is commendable, maintaining a 'native' dialect throughout to further envelop you in this faraway tale.

Hughes - at least in his director's cut - allows enough time to get to know his tribe, before sending Kodi Smit-McPhee (Slow West and the latest X-Men incarnation of Nightcrawler) off on his own for a torturous survival journey, crafting an interesting look at this 'first' friendly collaboration between man and beast, even if the film's 'based on a true story' moniker is a little liberal with the truth. Sure, the film often gets dismissed as the young adult version of The Revenant - and it is very much that both in terms of striking visuals and tough survival content, albeit reframed for a younger audience - but this should be seen as a compliment, with Hughes and McPhee delivering a surprisingly compelling feature.

Sony bring Alpha to UK Region Free Blu-ray with what looks to be an exact port of their recent US release, delivering a largely stunning 1080p/AVC-encoded High Definition video presentation framed in the movie's original theatrical aspect ratio of 2.4:1 widescreen. With such lavish, spectacular cinematography, the film really would have looked special in full 4K, but this looks suitably tremendous nonetheless, delivering beautiful panoramic vistas, and close-up nuances with equal aplomb.

It really is a visual feast. Rainbow crested waterfalls. Stunning fur hoods on the coats, where every strand of hair appears to be alive with its own individuated colour. Then there are the beautifully framed wider shots, which are not just fleeting but defining, leaving a mark once you've finished the feature. The colour scheme enjoys some striking tones too - from the various stunning horizons to the rich landscape and glowing fires that spark up light within these environments. There's very little to fault here, it's utterly demo worthy and largely reference excellence.

The accompanying DTS-HD Master Audio 5.1 does a tremendous job too - perhaps it would have been nice to have that added Atmos enhancement but the 'standard' track still delivers the goods, immersing you in the harsh and unforgiving environment and whipping the winds around your living room.


An excellent track which provides a superb accompaniment to the stunning visuals.

Bison rumble thunderously underfoot, leveraging some welcome LFE input, whilst wolves growl ferociously. The blizzard-like storm in the latter half truly draws you into the freezing maelstrom, whilst the quieter moments enjoy finer observations - whether insects and crackling fires or the sudden interruption of a roaring beast. Dialogue remains well prioritised, rounding out an excellent track which provides a superb accompaniment to the stunning visuals.

The disc offers up two versions of the film, presumably delivered via seamless branching, with a 96 minute Theatrical Cut that is slightly non-linear, has a different opening with a Morgan Freeman voiceover, and starts with a Cold Open of the cliff scene, whilst the superior Director's Cut is about a minute shorter, skips the voiceover and plays out in a linear fashion, building the characters before the events seen in the Cold Open.


It's a solid extras package.

Beyond the two cuts, there's also a quartet of Featurette-driven entries, looking at the lead character, the wolf, and then at the interaction between the two, as well as how they crafted the world the story takes place in, and a number of Deleted Scenes, including and Alternate Opening and Ending, afforded optional Commentary from the director. It's a solid extras package, primarily because of the two cuts, and it's rounded off by some Previews. A worthy purchase for fans to pick up.

Alpha is a surprisingly effective little solo directorial debut from Albert Hughes, taking its "Young Adult The Revenant" vibe and embracing it, delivering stunning visuals and a warm survival story. The Blu-ray release is excellent, making the most of those visuals with reference video and great audio too, and with two cuts of the film and a smattering of additional Featurettes, it's got a solid extras package too, rounding out a worthy purchase for fans to pick up.