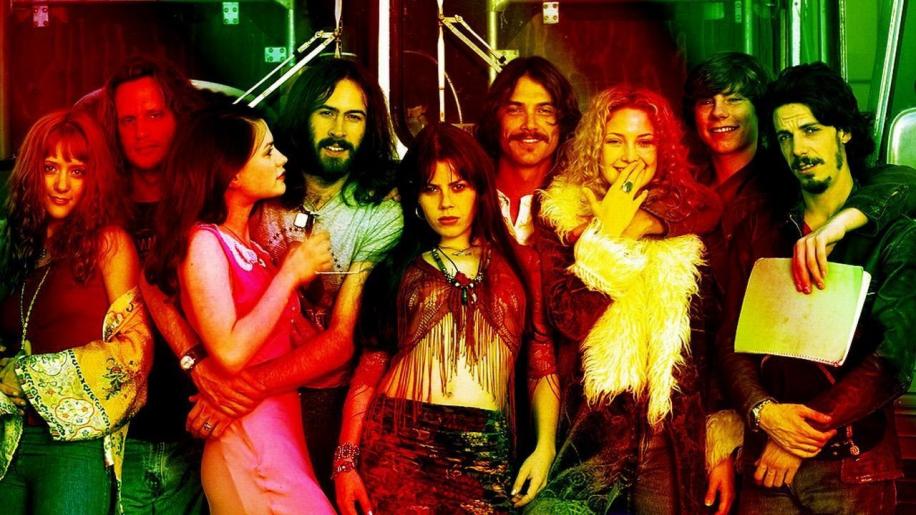 Jerry Maguire certainly made the director Cameron Crowe considerably better known, but after such a success, where do you go from there? This is the answer, an almost biographical movie. This tale could be considered a coming of age story, but underneath that is a much more interesting one of human nature.

William (Fugit) lives with his mother (McDormand) and sister, but is blissfully unaware that he was lied to about his age, due to his somewhat controlling, rigid parent. Her ways of life causes his sister to leave, but she leaves him a gift under his bed - her record collection. Soon, he's gripped by the music bug and is writing articles for underground magazines as well as sending them to Lester Bangs (Hoffman) of "Creem" magazine, who is impressed with his work and hires William to write an article about Black Sabbath (it's 1973 at this point). He fails in his endeavour to meet the band and get an interview, but at the arena where Sabbath is playing he meets the band "Stillwater". This is his first introduction to the real rock 'n' roll life style, so not only does he meet the band, he meets Penny Lane (Hudson) and the band-aids, who aren't groupies but more like inspirational fans. Williams' written work soon garners the attention of Rolling Stone magazine, who hire him to travel with Stillwater and write a piece on them. However, not only is he completely swept up in the thrill of all this, but as William is only 15 years old this doesn't sit well with his mother, as she hoped he'd become a lawyer, but she reluctantly agrees.

On his trip around America, which gets increasingly longer as Russell and the band never quite allow young William to get his scoop, he discovers sex, drugs, rock n roll and human emotions, primarily love, that he's never dealt with before - will he manage to write his article or will he be consumed by this wild world?

I'd never, ever seen this movie before - I owned it but I'd never watched it and I can honestly say I wish I had. Don't get me wrong, this hasn't changed my world or crept into my favourite movies list. In fact, the story behind this review is a certain editor who loves this movie couldn't believe I hadn't watched it, so by sending it to me for review ensured I would. Talk about sneaky, eh? As stated, to me this works as a coming of age movie, but it has a romantic slant too, which works very well as it becomes a focal point for the viewer when we relate to William and his dilemma of what to say, as his objectivity could be tainted due to his heart overruling his head.

Cast-wise, we have an ensemble cast of Indie actors, from McDormand, Hoffman and Lee to Balk and Paquin, there's not a weak link here at all and that's before we mention Ms. Hudson who lights up the screen with her free-spirited character. Penny Lane is certainly no Yoko but she's clearly deeply in love with Russell, the lead guitarist from Stillwater, but he's married - hence obvious tension. Sadly, our young William loves her too and we have two love triangles and this is only one half of the movie as such - the other half of the tale revolves around the internal struggles of Stillwater, primarily the conflict between the band and Russell (Crudup), the guitarist who thinks he's above the others. Hudson is radiant in this role, indeed, the moment where you first meet Ms. Lane, she looks so like her mother - it's uncanny.

This edition contains both the regular and extended editions of the movie, I don't actually have a preference over the versions for once. Both work well, with the extended version containing a lot of extra scenes that, while they increase the length of the tale, they don't ruin the story nor are they moments you think should have been cut. However if there was only one cut, I'd not be able to make a call on which one I'd prefer - they are both fine. I will say one thing though - I don't think I'll ever hear “My Cherie Amour” by Stevie Wonder in the same way ever again.