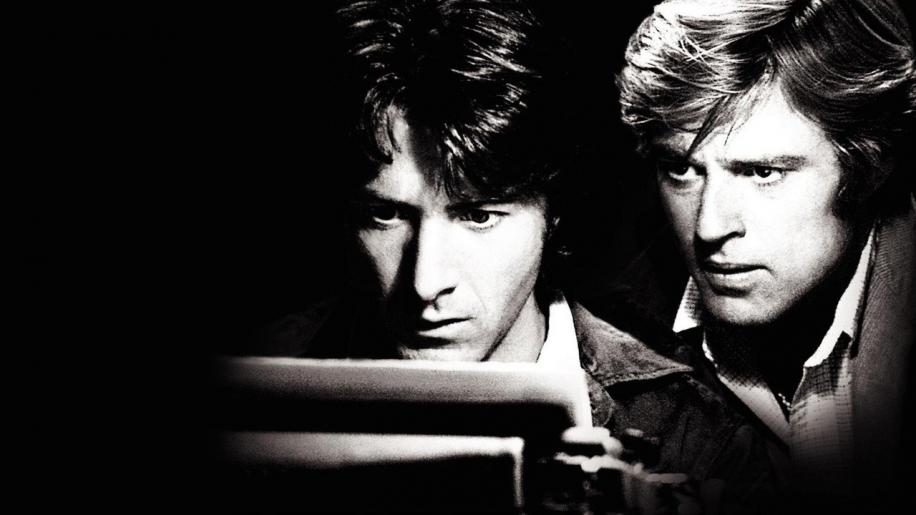 The results of this transfer are variable, to say the least. Coming in with an aspect of roughly 1.85:1 - fairly accurate to the film's original theatrical presentation - All The President's Men retains a lot of grain, some occasional flickering and a slight softness throughout. Whilst colours can often be quite bold - the bright red or blue furniture at the press office, and the liberal sprinkling of yellow phonebooks for example - skin tones seem a little faded and the contrast can sometimes be suspect, leading to some scenes, or individual shots, looking too dark. It certainly looks like a film from the seventies a lot of the time, although one or two sequences can appear quite polished - some sunny daylight moments, for instance, or some close-ups of Redford and Hoffman as they appear at peoples' doorways. Although, on one such occasion, there is some considerable vertical flickering in the middle of the frame.

Blacks are pretty strong, with the underground meetings with Deep Throat full of atmospheric shadow, and Hoffman's hair, particularly, like a patch of thick oil bobbing about the screen. The grain sometimes pebble-dashes the image in some brief shots, yet at other times it seems almost completely washed away. And, although there are no compression defects to speak of, the impression left of the visual transfer is that it is inconsistent. Presented with just the original English Mono track, in Dolby Digital, the sound for All The President's Men is clear and clean and free from any background hiss. A dialogue-driven film anyway, I'm pleased that Warner didn't see fit to re-master it with a bogus 5.1 mix. Whilst there really isn't much that can be said about the track, I'm happy to inform you that there is nothing amiss about it. David Shire's theme sounds subdued but that is intentional, and the speech is well-delivered throughout. Effects and surround-use are not missed at all as the film doesn't warrant them.

So, the disc does a good job of transferring the original track without any fuss or embellishment. Disc One contains a slightly dry Commentary Track from star and producer Robert Redford that, despite one or two quiet moments, still remains a fairly scene-specific and informative feature. It's not the most exciting chat track that you'll ever hear, but it does provide a lot of valuable background on the real events, the true characters of people involved and the process of getting the film made. He manages to give a reasonable balance of the plotting of the screenplay with the book by Woodward and Bernstein and the known facts of the story. In fact, it's remarkable just how little was improvised, with even the real locations used wherever possible and the painstaking duplication of the Washington Post offices, down to the positioning of every wastebasket, in a California studio when it proved too awkward to actually shoot in the offices themselves. Perhaps unsurprisingly, he has a tendency to lean towards to the character of Woodward, but he still makes every effort to be objective about the huge and labyrinthine story, and is reassuringly clear and methodical in his detailing. Not very witty then, but in keeping with the serious tone of the film, Redford addresses what is still quite a complex issue with authority and respect.

There is also an Alan J. Pakula Trailer Gallery which can be accessed trailer by trailer, or with a 11.50 mins Play All option. The films covered are Klute, All The President's Men, Rollover, Presumed Innocent and The Pelican Brief.

Disc Two is where you will find the documentaries, kicking off with Telling The Truth About Lies: The Making Of All The President's Men (28.30 mins). This is a snappy little feature, recently-made, and full of talking heads, clips and photos, and offers up a surprisingly driving sense of energy and challenge to the production. Hal Holbrook narrates, but we get to meet Redford, Hoffman, Goldman and cinematographer Gordon Willis, as well as the real Woodward and Bernstein and Bradlee. Check out how much Hoffman actually resembled the Bernstein from the period in the numerous photos, and there is a nice anecdote from the real Bradlee about how the actor, whilst hanging out in the press offices to find his character, inadvertently stalled a potential suicide from jumping. Redford clues us in to the primal reason for his taking the project on board in the first place - not the scandal and the politics so much, but rather the dynamic between the two reporters. It was this angle that persuaded the studio to back what many others saw as old news, lending it a fresher and more vibrant humanistic style. Despite some rather obtrusive music (which I like, although others may find it distracting), this is a very likeable making of that covers a lot of ground and doesn't outstay its welcome.

The next feature is entitled Woodward And Bernstein: Lighting The Fire (17.52 mins). Again narrated by Holbrook, this focuses on the two dogged journalists who had no idea what they were getting into, or the can of worms they were opening. With some reminiscences from the pair themselves (obviously culled from the same interview sessions as earlier), this also has contributions from other reporters, CBC News legend Walter Cronkite and even Oliver Stone, as they discuss the effect that this masterpiece of investigative journalism had on the relationship between politics and the press. The parallels and distinctions between the style and impact of reporting back then, when compared with the up-to-the-minute news of today, is effectively touched upon. Basically, these two courageous trailblazers wouldn't have been able to get away with it nowadays, as new laws governing the use of anonymous sources and the sheer ease with which the truth can be diverted via spin doctors, the internet and 24-hour news shows would have clammed-up or just dispersed their story within hours, let alone the two years they struggled with it. It's a good little feature, but really the topic needs a lengthier examination if all its repercussions are to be given fair trial.

Out Of The Shadows: The Man Who Was Deep Throat (16.19 mins) has Holbrook starting us off the trail of the world's most famous informant, beneath more invasive music (this time sounding remarkably similar to Trevor Jones' awesome score for The Last Of The Mohicans! Go figure.) The story of Mark Felt, once Deputy of the FBI has now become very public indeed, and it is really only given a short once-over here. It is, nevertheless, a fascinating tale that seeks to find out just why he turned on his government in such a way. Was it patriotism? Was he determined that the truth should come out because he believed the nation needed to know what its Intelligence Community was really doing behind the scenes? Or was it merely a means for him to strike back at an employer that had overlooked him for the top job of Head of the FBI? Along the way, there are a few strange photos of Felt in posed action shots, looking like a G-Man in a forties noir picture and an even more bizarre image of his boss (whom everyone is surprised Felt didn't just turn to in the first place with this information) in a very moody, arty-farty kind of portrait. The relevance of such secretive sources in getting the truth out is validated by everyone, however. Again, good ... but a little too brief.

Pressure And The Press: The Making Of All The President's Men (10.05 mins) is a vintage featurette from around the time of the film's release. This one doesn't have Hal Holbrook wryly commentating from the shadows, but is a relatively good contemporary piece that chronicles the production of the movie. With behind the scenes footage, interviews with the cast and their real-life counterparts and, finally, a brief word from the director, himself, this delivers a nice little expose of how the production coped with the enormity of its subject. It's interesting to hear Woodward and Bernstein discuss their methods and code of practice when interviewing people, and it is also amusing to hear people talk about the possibility of Deep Throat's identity becoming known. You kind of feel like whispering in someone's ear.

The excerpt from Dinah! Hosted By Dinah Shore from 1976 (7.09 mins) is the letdown of the bunch, though. Featuring Jason Robards as her guest, talking about the film - which had just been released - Dinah stutters and stammers her way through with the star valiantly attempting to keep the piece informative and relevant. Robards is one of my favourite Old School actors - his performances in Once Upon A Time In The West and The Ballad Of Cable Hogue are heart-achingly beautiful - but even he cannot save this from embarrassment. Sadly, not a good way to end what is, essentially, a great little roster of extras. All The President's Men is an important film, of that there can be no doubt. It was timely and audacious, taking the same dogmatic and tenacious approach that Woodward and Bernstein, themselves, took in getting the story out to the public. Redford and Hoffman do a superb job of depicting the unrelenting nature of the two journalists, and the overview of simple workaholics plugging away at the grand and imposing edifice of the White House, like a couple of mountaineers struggling up the face of Everest, is truly enthralling. Pakula's finest hour, and a rare triumph of realism over Hollywood melodramatics. Not a film to everyone's tastes, but still a consistently interesting and entertaining tale. Think of it as a detective story and I'm sure you'll find the movie a rewarding experience.

The 2-Disc Special Edition has a lot going for it, too. Despite a slightly disappointing image - I really believe that they could have done more - the extras add a fair degree of value. The new making-of is succinct, fast-moving and fact-packed - just like good journalism should be - and the commentary from Redford, whilst occasionally dry and quiet, is frank and revealing. The overall impression is one of detail and dedication to the story. After all, Hollywood really didn't need to dress this one up.