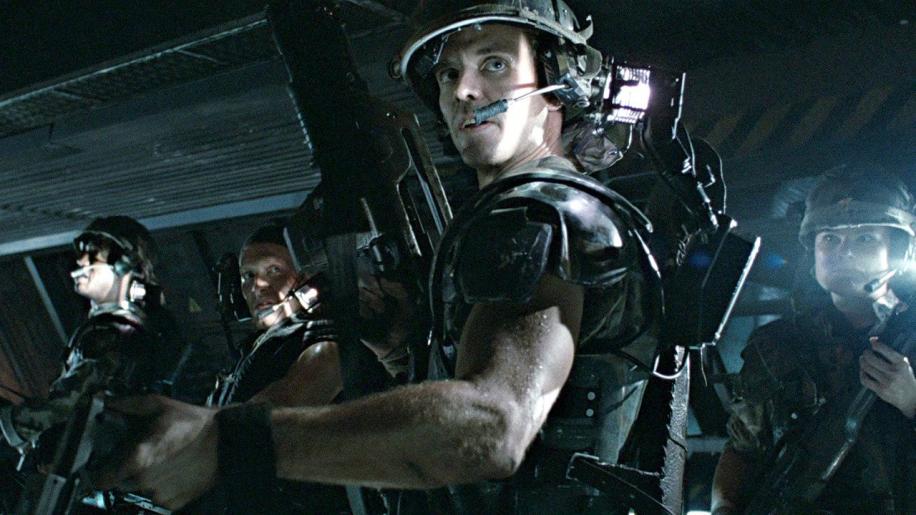 In space no one can hear you scream. Cool tagline. Makes you want to watch it doesn't it. Once you have seen it, and regained control of your senses, it makes you want to go and watch it all over again.

I can vividly recall the fear I felt when watching Ridley Scott's sci-fi horror masterpiece for the first time, and not because I have excellent recall, but because watching it once more for this review it shocked me all over again. In case you have been travelling in suspended animation on board a deep space tug ship for the last 20 years let me outline the plot. The Nostromo is a deep space tug ship (see what I did there?) with a crew of 7 including Dallas (Tom Skerrit), Ripley (Sigourney Weaver) and Kane (John Hurt). They are travelling back to earth in suspended animation when they are surprisingly awoken far short of Earth by the ships computer, Mother. Mother has picked up what may be a distress signal from the surface of a desolate planet, and the crew are bound by space coda to answer distress calls. The rest is cinematic history. Face huggers, chest bursters, acid for blood, jumpers for goal posts, small boys in the park Hmm, Hmm isn't it. Most of us have seen and adored this movie in one of its previous incarnations. I own a VHS box set packaged in the shape of a face hugger! It was still a real delight to reacquaint myself with arguably Scott's best work, and when you consider his CV includes the likes of Bladerunner and Gladiator that is a bold statement. Alien was one of those happy coincidences where a visually adept director was working with quality actors (rather than star names) and an excellent script by Dan O'Bannon that allowed character development aboard the claustrophobic corridors of the Nostromo. The set design and cinematography further enhance this industrial isolation, and Jerry Goldsmiths score builds the tension effectively, avoiding the common pitfall of pre-empting the shocks with the squeal of a violin. The only minor let down is the alien itself, who in a few scenes looks too much like a man in a suit, which of course it is. These things always seem to work better when the audience is left to fill in the visual blanks, putting our own demons in place of the ones on the screen.

In this reviewers opinion however this is near cinema perfection. Score :9

How do you follow up on Alien, possibly the best of it's genre, the horror sci-fi. This was the problem facing the Fox Studios when their “B-movie monster flick” became a worldwide box office smash in 1979. The solution it seems would be to go for a different genre altogether, the sci-fi action adventure, add an “s” to the title making it pleural, throw as many of the beasts as you could at the sole human survivor from Alien, and challenge her to get out of that one.

James Cameron's Aliens picks up the story 57 years after the events on board the Nostromo. A deep space salvage crew stumbles upon Ripley's escape craft. She learns from Carter Burke (Paul Rieser), the company's liaison with Ripley, that she has slept through the life and death of her only daughter, she is being held responsible for the destruction of the companies space ship, and 60 families of terra-forming colonists are now living on the planet where the alien spaceship was first discovered. When contact with the planet is lost Ripley is approached by Burke and Lt. Gorman (William Hope), the leader of a crack squad of Colonial Marines, to re-visit the planet and find out what has gone wrong. Haunted with nightmares Ripley reluctantly agrees.

Cameron has sensibly decided to take a different route to the original Alien, and has made an outstanding war movie, with the relationship between Ripley and Newt (Carrie Henn), the only survivor left on the planet, as the emotional soul. Cameron has often said that all his stories are basically love stories, and this one explores how far a mother is prepared to go for the love of a child. Don't get me wrong, there are no emotional hang-ups in the picture, and it never gets in the way of the first-rate pacing and exceptional action, but it does provide believable motivation for Ripley. After all she had been through in the first movie, the audience needs to be convinced she would be willing to go through it all a second time.

Those of you familiar with the work of James Cameron (Terminator, True Lies) will be aware he has a small troupe of regular actors in most of his movies including Lance Henrikson who plays Bishop, a synthetic or artificial life form as he prefers to be called, and Michael Biehn, and Bill Paxton who play Hicks and Hudson, two of the squad of Colonial Marines sent to sort out the alien menace. They all prove again why Cameron is keep to work with them, turning in sound and believable performances. If the first movie was about the alien, then this is about Ripley, and Sigourney Weaver is outstanding and fully deserving of her Oscar nomination, providing an emotional depth and physical toughness at the same time. The alien queen may have no trouble dealing with a rock hard group of soldiers, but don't mess with a pissed off mother!!

Aliens proves that sequels can be as entertaining and worthy as the original, if they extend the characters, and change the premise. Throw in a good story and top notch action director and you get another box office smash. Easily as enjoyable as Ridley Scott's film but for different reasons this is a definite winner. Score :9

Returning to Earth on board the Sulaco are the survivors of the battle with the Aliens. Ripley, Newt and Hicks lie in hypersleep chambers. During the journey an electrical fire forces the ships computer to eject the Emergency Escape Vehicle. The EEV crash lands in the ocean on Fiorina 161, yet another hole at the edge of the galaxy. The bad news is that Newt and Hicks do not survive the crash. The good news is that, apart from a black eye Ripley is fine. The other bad news is that Fiorina 161 is a penal colony housing 25 of the most dangerous rapists, murders, and child molesters in the Universe. The fact that at least ten of them speak with Scouse accents is, I am sure, purely co-incidental. Oh and one more thing; it's just possible an alien may have snuck on board the EEV when no one was looking.

The success of Ridley Scott's Alien, and James Cameron's Aliens films in 1979 and 1986 had fans and film executives alike clamouring for more. Both had been huge commercial and critical hits and Fox saw the opportunity for a franchise. After a struggle to convince Sigourney Weaver that the story still had legs, and a massive payday for shaving her hair, they convinced David Fincher to make Alien 3 his debut feature film. Fincher had an excellent background having worked on visual effects at ILM, and directed T.V. commercials and music videos. His strong background in the visual medium is what gives Alien 3 its stunning graphic look. Unfortunately this is the high point of this 1992 offering. Unlike the first two movies, which I have watched and enjoyed many times over the years, I had seen Alien 3 only on release. I tried to forget my preconceptions and watch again with an open eye. Disappointingly it was as bad as I remember it. In many peoples eyes time has improved their opinion of Alien 3, but in time your brain turns to mush as well so don't read anything into that. None of my criticisms are new but they are all still valid. The story is too bleak. It starts with the totally unnecessary death of two characters loved from the previous movie. I mean Newt drowns and Hicks is skewered in his hypersleep chamber, while Ripley gets a bit dirty and a black eye! Alright a lot dirty then. Two minutes after inconsolable grief Ripley finds a bit of lippy and hops in the sack with the prisons medical officer (Charles Dance). The premise of a mutating Alien is excellent, but when it is set loose in a Maximum Security Prison with 25 murderers and rapists who cares!! Many aspects of the plot seem a contrivance. A prison without a single weapon? All the actors having shaved heads because of lice? There are only 25 of them. The nit nurse would clear a whole school of them in a week. Fincher replaces tension and suspense with gore and conventional shock tactics. The dialogue is so cheesy the whiff of cheddar filled my lounge. At one point two inmates go missing and another is suspected of killing them. The conversation between the warden, and the leader on the inmates goes:

Warden: “I am afraid we have to assume there is a good chance this simple b*****d murdered them”

To be fair to Fincher a strong whiff of big wig interference surrounds the movie, and his visuals are immaculate. His framing, lighting of a scene and camera angles are beautiful and innovative. Every frame of the film would look good as a 10x8 on your wall. If only they told a story worth watching. Score :4

Two hundred years has passed since Ripley sacrificed herself by taking a nosedive into a vat of liquid lead in order to kill the alien queen gestating inside her. The Weyland-Yutani Corporation has been taken over by Walmart, and the military has developed an interest in the alien. After a series of failed cloning from DNA found on the planet Fiorina 161 Ripley number 8 proves a success and gives “birth” to an alien queen. Ripley learns that 13 aliens have been bred, and the queen is pregnant again. She starts to discover that she possesses some alien DNA and develops some of their characteristics. It is not long before the aliens escape their military prison and only Ripley and a band of space pirates can stop them. But where do Ripley's loyalties lie. Predictably we are soon running down metallic military corridors trying to escape the aliens at the same time as trying to kill them before the space station gets to earth.

Jean-Pierre Jeunet (Delicatessen) was the surprise choice to resurrect the alien franchise in 1997, after Danny Boyle had passed on the opportunity. The script writing duties were passed over to the dependable Joss Whedon, who was told, “write anything but bring back Ripley”. His solution was a dark, witty and slightly tongue in cheek action yarn. While not a patch on either of the first two films in the alien series it does have entertaining moments, especially if you ignore the ridiculous and frankly laughable ending when Ripley is empathising with her alien grandchild. There is little in the way of character development with the space pirates being mere fodder for the alien. All except Ron Pearlman (Johner) who is excellent, and has some hilarious one liners (“Can you fly this ship?”, “No I mostly stand at the back and hurt people”). Sigourney Weaver is decent in relaying an air of menace now she has a touch of alien DNA in her system, but Winona Ryder (Call) seems confused as does her characters motivation. She breaks into the space station to kill Ripley and the scientists and stops people doing so at every opportunity. Still that's women for you.

No classic, but does partly redeem the series and leaves the door open for a fifth film. Score :6