Nuke it from orbit...it's the only way to be sure 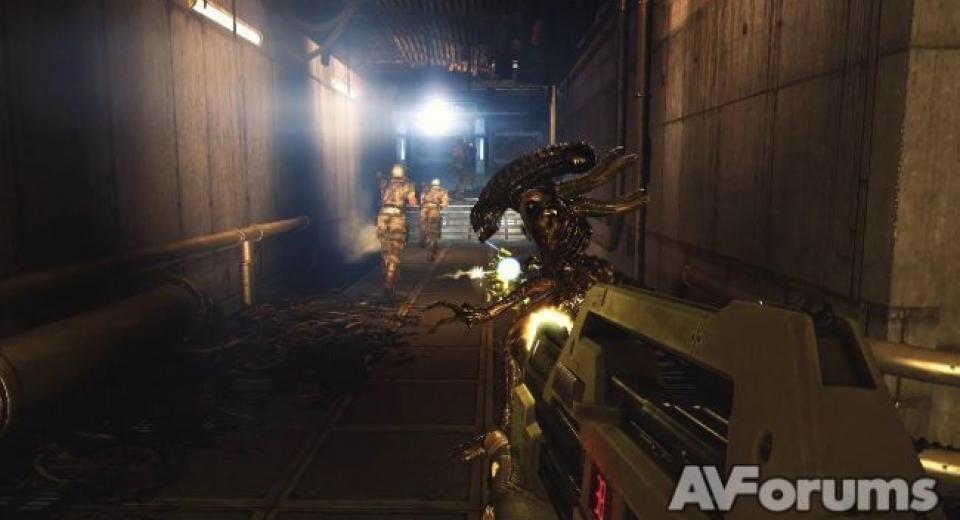 Set aboard distant space craft and alien worlds with iconic weaponry and characters fighting one of the most well known enemies in science fiction; there are few movie properties as suited to a video game adaptation as Aliens. Originally slated for release on the PS2 in 2001, the project was cancelled and the franchise lay dormant till 2006 when Sega acquired the rights and placed it in the hands of a fresh developer.

Following a lengthy gestation period which seems to have sent fans of the franchise into a frenzy of anticipation, Aliens: Colonial Marines has finally burst from the chest of Gearbox Software. Touted as a true sequel to Aliens, you play Corporal Christopher Winter as part of Rhino-Two-One, a team sent aboard their ship the Sephora to follow up on the previous expedition seen in the film Aliens. Winding through both the vessel known as the Sulaco and the planet LV-426 you go in search of what happened to the ill fated crew.

It starts off as you would expect, the Aliens checklist was painstakingly adhered to, that iconic sounding pulse rifle, motion tracker, sentry guns, power loaders and more are all present and accounted for. This would normally be the part of the review where I begin to criticise the game for being yet another first person corridor shooter with a linear campaign. That remains true here but the problem is a good 90% of sci-fi shooters can trace their lineage back to Aliens in some shape or form.

This seems to contribute more than usual to the boiler plate feel of the execution here, elements inherited from the Aliens franchise are faithfully reproduced but anything that has been extrapolated beyond the scope of the films is presented in the most mundane fashion. The pulse rifle for example looks and sounds like you may remember; similarly the SMART guns and turrets play their roles convincingly. Less convincing is the rest of the armoury which falls into the the standard grouping of pistols, SMG's, shotguns and so on. There are some variations with legendary weapons to find that relate back to key characters in the franchise but you won't be firing much that's new, exciting or even futuristic here. The weapons you have are subject to the predictable levelling up system which allows you to rank up your marine throughout the campaign spending unlocks on attachments and enhancements for your arsenal. It certainly doesn't make for a enjoyable start to the experience, the pulse rifle was woefully useless before unlocking a red dot sight and a decent secondary fire; a pattern which continues throughout the weapon classes. Even with all the upgrades and attachments though the combat rarely reaches beyond serviceable and is usually rather tedious, with you simply following the barrel of your gun to the next objective you must defend or run towards. Which as a first thought is the no brainer direction for this project to go in, it doesn't however encapsulate what made Aliens as beloved as it currently is. The atmosphere, suspense and straight up jump scares rarely even sniff the heights they aspire to. A large part of this can be attributed to the human enemies you encounter. Not being a die hard fan I had to resort to Wikipedia to inform me of who Weyland Yutani are and their sinister motives which indeed supplied an adequate excuse to be picking off head shots from behind chest high walls but doesn't change the fact that the gameplay is as stale as it is derivative.

Alien combat could have been the saving grace, imagine inching your way through a pitch back environment with only the illumination and the distinctive beep of your motion tracker leading the way. Lighting up Xenomorphs with the muzzle flash from your pulse rifle as they hunt you down. Instead the combat relies upon frequent gimmicks and palette cleaners to keep you interested rather than creating an Alien twist on common conventions. The most ridiculous case in point came in one "stealth" section which leans on the Xeno's reliance of smell rather than sight. You end up playing an extended version of "What's the time Mr Wolf" as Aliens awkwardly prance around on their hind legs looking for you until they go back to "sleep" and you can be on your way. It borders on comedy and does nothing but further remove you from the experience and bring you closer to the power button. Several variations of enemies are introduced with "Spitters" proving some ranged combat, larger Aliens who charge you and require a lot of circle strafing and even more firepower to bring them down and of course the obligatory Queen awaits you in the final encounter. None of them exhibit any interesting AI traits beyond charging in numbers and forcing one of those painfully long loads upon death. It's at its best when it throws everything it has at you; frantically shooting Aliens who are attacking enemy soldiers can hold flashes of fun. They are always short lived though and for every nugget of enjoyment like the SMART gun section which simply requires you to hold down the right trigger to kill everything which appears on screen, there is a less rewarding section like spawning with no weapons and having to escape using only harsh language.

Visually Colonial Marines is about as remarkable as its gameplay, while it's hard to shake off the expectations cultivated by the over reaching marketing material, no comparison needs to be made to see that graphically it simply can't stand up to its peers at the this stage of the generation. There is only so much to be done with when it comes to linear corridor shooters but the lack of graphical prowess on display directly impacts their ability to invoke the source material. More dynamic light sources would have gone a long way to creating the atmosphere required, character models more capable of facial expressions would certainly have allowed them to become more relatable and as such elements of the story would have made more of an impact. Sound has some stranger issues, the score seems more like something you would find in Star Wars and again rarely tallied with the atmosphere I would expect from an Aliens title. At the very least the sound of the pulse rifle should, and does, bring a smile to your face. The campaign won't trouble anyone who wants to see it to its rather anticlimactic conclusion and should require no more than 8 hours on normal difficulty. It may well be worth playing to rank up your marine as the upgrades can be carried over to multiplayer.

Multiplayer thankfully side steps any Marine v Marine action and opts for the asymmetrical Alien vs Human gameplay. Matches consists of two rounds with each side taking turns as each faction. Team death match appears as standard while  "Escape" tasks marines with reaching an evac point whilst being hunted down by the other side,  Survivor gives the Marines six minutes to survive an increasingly difficult onslaught of Xeno's and Extermination stands as their spin on attack and defend with the marines trying to plant a bomb in an Alien nest

Marines play exactly the same as in campaign; relying on firepower, motion tracking and teamwork, to detect and defeat the Xenomorphs. Aliens have the ability to detect enemies pretty much at all times and from great distances, can walk on all surfaces and have quite devastating melee attacks, playing as the spitter class also adds some ranged abilities. The only downside is a single shotgun blast can end your charge before you even have a chance to get in close. This doesn't stop the Aliens from being largely overpowering with the combination of manuverability and detection trumping the marines firepower. Marines must work together and communicate effectively to be successful whilst a team of Aliens can operate individually and easily still succeed. Despite this the multiplayer does hold some value, the asymmetrical gameplay while not new does provide some entertainment and once you have got to grips with the Alien mechanics they can offer some genuine fun. You have the ability to create custom load outs for both sides and can rank up both factions separately improving your marine weapons and unlocking new Xeno abilities.

Now all we need is a deck of cards.

It's hard to decide whether Aliens Colonial Marines collapsed under the weight of such a prestigious property or simply failed to live up to some lofty expectations. Whatever the reason it's simply a missed opportunity. The Aliens franchise may lend itself easily to another mindless shooter but there was an opportunity to translate what makes Aliens popular into something much more than that. With large amounts of the story, characters, weapons and more laid out for them the stage was set for something spectacular. The extended development cycle points to behind the scenes issues but the deficiencies are both numerous and glaring. It all adds up to a "by the numbers" uninspiring title that despite a measure of redemption in the multiplayer; is a woefully inadequate attempt which even this seminal license cannot save.