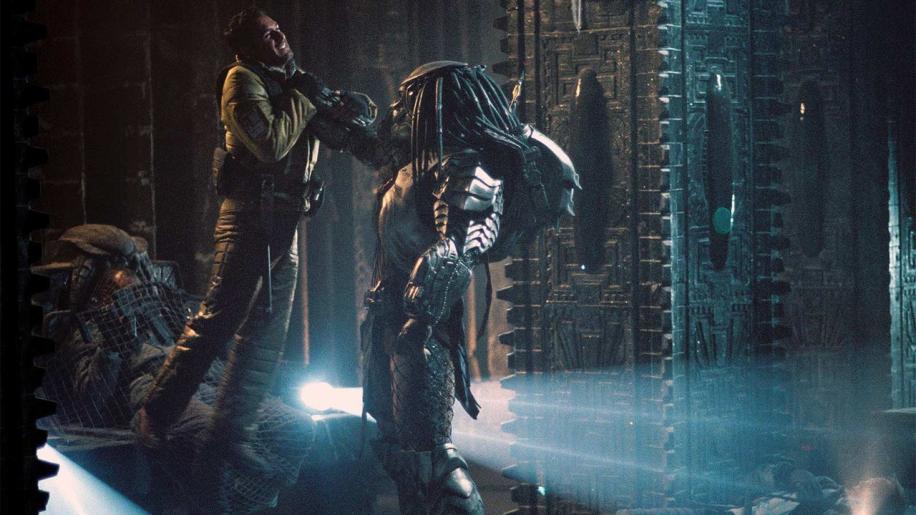 'Aliens vs. Predator' is presented in an Anamorphic 2.35:1 transfer and it looks absolutely stunning. As most of the film is centred around dimly lit corridors it's absolutely essential that the blacks are solid and deep, and they are absolutely spot on here. Likewise the picture and colour levels are crisp even and consistent throughout, meaning that even in the limited light of the underground temple clearness and clarity are never an issue. The brief scenes above ground are handled just as superbly with the wonderful constructed landscape coming to rich and vivid life on the screen. Coupled with a superb flawless print, and virtually no grain or artificing, this disc makes full use of its generous 8.30 Mbps bitrate and is a truly stellar transfer.

Being blessed with a 5.1 DTS mix, AVP provides a stunning listening event which really brings the cinema experience into your living room. A lively and versatile mix, the track demonstrates impressive flexibility alternating between deep and powerful bass to subtle and incisive clarity. There is a wonderful separation in the audio and an exhausting use of full surround to bring the action to life. Dialogue too is pin sharp and clear, even when the carnage around is in full flow. The standard 5.1 Dolby surround track too, more than holds its own, sacrificing some of the clarity of the DTS but still superb in its own right. An absolute joy to listen to.

The two disc set comes packed with an enormous wealth of extras that will keep fans of the movie engrossed for hours. Disc one provides us with two audio commentaries (although only on the theatrical edit), one with Anderson, Hendriksen and Lathan, the other with effects crew members John Bruno, Alec Gillis and Tom Woofruff Jr. The latter is certainly the more informative for those truly interested in the physics of getting something like this to the screen, but it suffers on occasion from letting itself overly bogged down in science as these crew commentaries have a habit of doing. The commentary from the director and principle cast again is somewhat of a mixed bag. It's never less than interesting and throws up some great information about the shoot in an easily digestible manner. Where it slips up however, is all involved gushing how they have actually made something special here. Perhaps Hendriksen has spent too much time in direct-to-video land to remember a time when he actually made some amazing movies and his sense of taste is shot to hell. All in all this pair of commentaries are a godsend for those appreciative of the movie, and at the very least an interesting diversion for the rest of us. Finishing off disc one is a modest, but handy feature which allows you to set an icon whilst watching the film to indicate when additional scenes have been added. Useful if you want to compare the two versions, pretty much redundant for much else. Disc two follows on with the bulk of the extras. These are split into five distinct sections which chronicle the creation of the film from beginning to end; 'Pre-Production', 'Production', 'Post Production', 'Licensing the Franchise' and finally 'Marketing'. Each contains a flagship documentary (most running upwards of 30mins or so) and a couple of supplementary materials. The documentary 'AVP - The Beginning' opens things off in the 'Pre-Production' section. This is a densely packed piece with a wide variety of information and behind the scenes clips about the genesis of the movie which make it well worth persevering with. It leaves you somewhat disappointed that the enthusiasm and ideas shown here didn't ultimately result in somewhat of a better movie. Rounding off this opening section is 'ADI Workshop', a brief look at the creation of some of the suits and motorised effects used in the movie, and some storyboard and gallery pieces. 'AVP Production' heads the 'Production' section and is comprised of interviews with cast and crew. It is comprehensive and in-depth at one hour in length, however again it falls prone to the usual back-slapping from the cast. Anderson comes across on occasion as an over-enthusiastic know-it-all schoolboy type, and Hendriksen continues where he left off in the commentary trying to delude himself this is the next 'Aliens'. Despite these flaws however there is a lot of material here, and most of it is pretty engaging. 'Miniture Whaling Station' is a brief look at the marvellous use of miniatures in the film, whilst 'Facehuggers and Eggs' and 'Trouble at the Mouth of the Tunnel' are no more than brief pieces of behind the scenes fluff. 'Post-Production' contains the documentary 'Visual Effects Breakdown' which offers a thorough examination of all the major CGI-heavy scenes found in the film. This is a great little look on how the effects team go about integrating digital effects into the movie. There's even a section on there where they all pride themselves on the bullet-time facehuggers where you are left wincing about how so many could get something so wrong. Also in this section are three deleted scenes with optional Anderson/Hendriksen commentary. As you would expect, scenes not deemed worthy of putting into an extended edit are hardly going to offer any revelations and they don't, everything here is superfluous. 'Licensing the Franchise' has a nice little featurette on the creation of the Dark Horse comic book franchise of Alien vs. Predator, including interviews with the principle folks involved. Accompanying it in this section is a little piece on figurine magnet Todd McFarlane. Although it's nice to see a bit on McFarlane (he makes such cool figures), the connection to the film is a little tenuous to say the least. Finishing the disc off is the 'Marketing section'. This contains a 'HBO Special', a by-the-book marketing tool which holds little of interest, three trailers for the movie, a trailer for the 'Alien Quadrilogy', and a trailer for 'Planet of the Apes - 35th Anniversary Edition'. All in all this is a fantastic selection. Although not all winners, the collection of supplements here is so exhaustive that there is a good few hours of material to entertain here, and there's enough quality material hidden in amongst the fluff to satisfy. If you are a fan of the movie, you will be in heaven as no stone has been left unturned here in this comprehensive assortment.

Undoubtedly the best release of the film so far, this is certainly a wise investment for individuals who enjoyed the movie or completists of the franchise. Shame about the film itself, but this is a thunderously good package for those inclined.