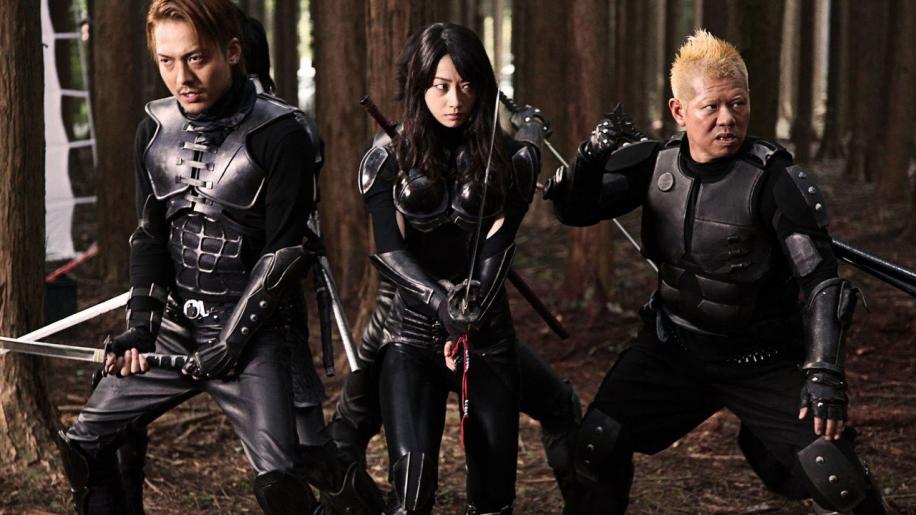 “Cult” – the Oxford English Dictionary defines the term, as far as popular culture goes, as “a person or thing that is popular or fashionable among a particular group or section of society”. Pretty ambiguous if you consider that such a definition could encompass just about everything, from abstract art to Jeremy Kyle. Yet it is a prefix that we, as an audience and consumers of tales told on the silver screen, have come to accept as not merely an added categorisation but also as an ominous caveat to be heeded before paying the price of admission. Sing-along with The Sound of Music has a cult following, but I dare wager most cinema goers would rather find a mouse’s head in a Mars bar than sit through such an experience. Well similar levels of scorn have been rightly poured upon the bubbling gore-fest cauldron of modern Japanese splatter cinema. A mini boom in recent years, thanks in no small part to the decreasing price of home formats and the manner in which the interconnectedness of the internet allows for more and more consumer choice, we’ve so far seen everything from school girls with guns for arms, to women firing throwing stars from their posteriors. The latest of this line, coming from the producers of Tokyo Gore Police and Machine Girl, is Alien vs. Ninja.

It is a loose period tale (and I’m not talking JFK levels of inaccuracy here, this film makes Bill & Ted’s Excellent Adventure look like a David Starkey documentary!) that follows a group of ninjas from the Iga clan. For those not familiar with the background, they were a famed clan of ninjas that now crop up in Japanese popular culture quite regularly, be it cinema, manga, anime or videogames. Yamata, a tough shinobi not born into the life but from peasant stock, is eager to prove his mettle against anyone willing to stand against him. The film flashes to life and mere seconds into it we witness him taking on seven or eight (you lose count when limbs fly as it makes keeping tally a nightmare) in a stand off. He could easily outrun them as he’s already accomplished his mission and blown up a building, but his desire to meet his match overrides sensibility, preferring to turn, plant his feet and draw weapons. With dialogue that leans sometimes less towards the camp machismo of Top Gun and instead stumbles into Talladega Nights’ Ricky Bobby territory – “I can take small fry alone” – the cheese factor is cranked to eleven. The CG effects utilised to show the ninjas flying between trees and over buildings are two dimensional to say the least, but the surprising thing is that, like previous splatter titles, it has a crazy charm that is hard to pin down. There is a very real phenomenon in a modern era whereby consumers have choice overload and every product has been tailored via focus groups and demographics that when something is so bad that it is impossible to parody, it almost attains a level of credibility. Alien vs. Ninja is no different, it starts out hammy and doesn’t get any better, with a script that probably took less time to write than current YouTube sensation Rebecca Black’s “hit” song Friday.

So where does the charisma stem from I hear you ask. Well, it’s hardly a complicated case of storytelling alchemy but the makers have infused their own heady Japanese brand of off-the-wall comedy, knowing winks to the audience and the final piece of the puzzle – gore. We’re quickly introduced to the rabble of ninjas; Rie the token female who comes complete with boobed armour, lipstick, eyeliner and leather trousers so tight that if they gave way they’d have your eye out. Then there’s Jinnai, Yamata’s best friend who wears a diamond earring, has floppier hair than your average boyband member and even checks his reflection in his sword. And finally, bringing up the rear, is the comic relief of the bunch, a podgy ninja whose cowardice knows no bounds and is the whipping boy of the group. They, and Yamata, are all bedecked in neo ninja uniforms, seemingly made out of historically accurate polystyrene and PVC, held together with plastic clips. A few dead enemies later and a fireball descends through the atmosphere. The beauty of this kind of lo-fi pap is that by the time you’ve made it through the opening ten or fifteen minutes, if you’re not aversed with this kind of genre, you’ll likely have stared in disbelief at so many instances of improbability that your senses will have been flooded – you’ll either get out of your seat or accept the skewed universe you have ventured into and let it wash over you.

With the barest of nods to a story out of the way the real action can begin, and the surprising aspect of it is that it’s actually quite good. Now don’t get me wrong, it isn’t exactly Ong Bak, but the choreography is arguably better than the mediocre material required. There’s the usual speeding up of footage, but when it’s implemented in a way that is glaringly obvious it adds to the over-the-top nature of the beast. The alien being the prerequisite man in a suit that such Japanese oddities demand is aided in the same way that the poor effects in all similar films are – by diverting attention to more easily faked results. Why stare at a man in a poorly fitting Styrofoam suit, covered in Swarfega and waddling like he’s soiled himself when you can get a better close up of the arm that’s just been severed? The gore builds steadily, with limbs flying, people swallowed into the earth Tremors style and the ensuing offal spewed in a glorious arc of crimson. Entrails litter the ground like streamers after a Christmas party and alien arms erupt into a pussy mess once sliced – every opportunity to throw something creatively unpalatable is taken, but the results are so overplayed and the budgetary constraints so visible that the effects are humorous rather than sickening – an angle that is continually played to as the feature drifts into comedic territory.

Now this wouldn’t be a good niche Japanese title without a bit of pervy humour and it seems even extraterrestrial killing machines can become transfixed by a nice pair of jumper dumplings. It is fitting that such a frankly absurd happening is perfectly in keeping with everything else that has thus far gone on. To say that Alien vs. Ninja is an acquired taste would be an understatement of Godzilla sized proportions. Where else can you see an interplanetary predator kicked in the groin and stabbed in rectum, after which the sexy female ninja sticks her tongue out and flips the bird to camera? Stylish in its own distinctive way, but so full of cheese and ham that you may just feel queasy afterwards.