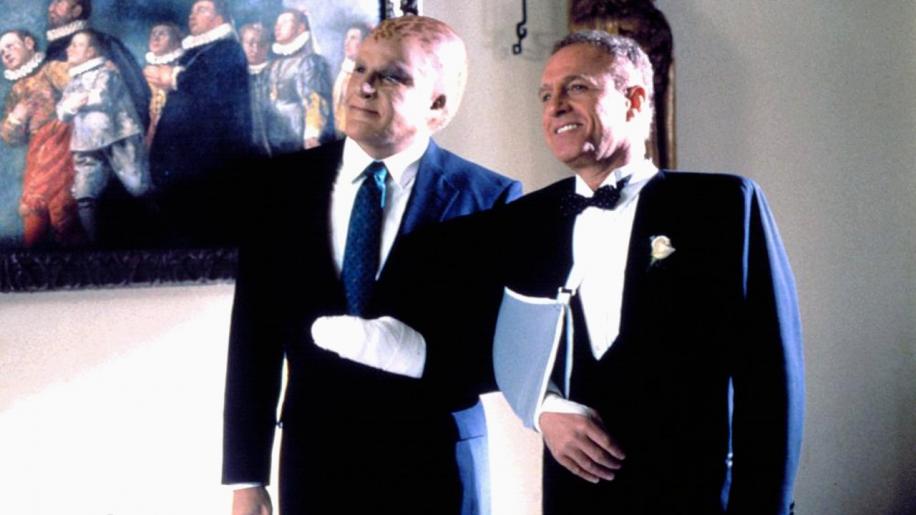 There are many pursuits in life, most centre on fame and/or fortune, but there is one that, perhaps, should be regarded above these, a spiritual pursuit: the knowledge of yourself. For it is impossible to truly correct the world around you unless you have fully corrected yourself and to do that you must attain said knowledge. Unfortunately such a pursuit is rarely embarked upon, it is maybe considered too preachy, such philosophy has been considered by religions far and wide for centuries. However there is a common medium by which such ideologies can be explored. I mean television. More especially science fiction shows. For science fiction has long been a way to explore contentious material under the veal of story telling.Back in 1988 Rockne S. O'Bannon penned a marginally successful police buddy movie Alien Nation. It was very much in the 'Lethal Weapon' motif but with a significant twist, one of the cops was an alien. The film itself was largely unremarkable, however, the Fox executive felt it had potential for a TV series. With an already proven track record including The Six Million Dollar Man and The Incredible Hulk series' to his name, Kenneth Johnson was brought on board to adapt the feature film for television. His take was simple, tone down the 'Lethal Weapon-ness' and concentrate on the alien's plight at being the newest minority in America, and in doing so created one of the most through provoking science fiction TV shows of all time. It was criminal that the show was pulled after only one season.

The pilot largely ignores the events of the feature film, keeping only the characters and overview. It starts up with a news bulletin proclaiming the arrival of an alien spaceship in the Mojave Desert. It contained a quarter of a million Tenctonese, a genetically engineered alien race born into slavery, able to adapt to any harsh working climate. Their ship crash landed and after five years in quarantine the Newcomers, as they are wont to be know, make up the newest population of Los Angelis. We follow detective Matthew Sykes as he is paired with newly made detective George Fransisco (in the film he was called Samuel, George was a nick name) as they try to unravel a series of murders and mysterious events concerning the Newcomers. However, this plot all takes a back seat to the real story, the underlying characters and their adaptation to their new environment. With themes of racial and religious bigotry piled on top of family values, growing pains and a dash of good old fashioned comedy and buddy cop routines Alien Nation is an all encompassing piece of television.

At its heart it is the characters that drive the show forward. Sykes (Gary Graham) is the everyman, meant to represent the audience. On the surface he is easy going, light heartedly picking fun at the expense of his new partner blissfully unaware how offensive it is and coming to terms with the loss of his partner, Tubbs (in a scene lifted from the feature film) at the hands of a Newcomer, only to find he is partnered with one. He is a wonderfully complex character at once defending Emily Francisco (George's eleven year old daughter) from the screaming hordes of 'purest' that wish to deny her entrance to a human school, but at odds to find he has to live next to one. Francisco (Eric Pierpoint) has the typical American family, the aforementioned daughter (Lauren Woodland), a strong willed but supportive wife, Susan (Michele Scarabelli), and a rebellious teenage son, Buck (Sean Six). Later in the series he has to cope with an aged relative too. Throughout the series' run we really get to understand these characters and care for them. Of special note is the blossoming relationship with Sykes and his neighbour Cathy (Terri Treas). But it is with the banter between the two cops that stand out. Being comedic, poignant and all together tolerant, this is where our understanding of the relationship between humans and the Newcomers really lies. Of course it helps that the two characters sometimes behave like the 'Odd Couple'.

As the episodes develop so to does our understanding of the different cultures coupled with the unwillingness of the human race to accept them, despite its honourable notions. Scenes like the zeroing in on the black man at the scene at Emily's school really hammer home the feeling that we as a race haven't really come that far after all. Such scenes are never too heavy and always make their point without going over the top. Later episodes tackle such touchy subjects as torture, brainwashing, forced prostitution, religious persecution and likening to concentration camps. To balance this we are treated to George and his wife as they try to conceive and eventually have a child of 'this earth', making a statement that this is now their home. I've already mentioned Sykes' and Cathy's relationship, but will again as it is so skilfully handled one really warms to it.

You can probably tell that I really enjoyed this show; I did when it first aired, on its subsequent repeats on satellite TV and now on DVD. However I have noticed a few things; firstly poor old George has had to cope with a lot, he lost his brother in a 'Russian roulette' type game that was then started on Earth, had one of his children forcible removed on the ship, in quarantine was subjected to brainwashing; it's a wonder the he can raise the stable family he has. Secondly each episode is wonderfully edited, there are few close ups, the directors preferring to capture two or long shots as all the actors work together; for it is there presence and their interaction that is a joy to watch. Though all were pretty unknown at the time, each was exceptionally talented and combining them with excellent scripts make for compelling viewing. Each episode is pretty stand alone, and can tackle some far reaching subjects. Episodes such as Little Lost Lamb concentrate on forced prostitution and the exploitation of minors; Fifteen With Wanda is a terrific paced show that sees both Sykes and Francisco struggle with family problems while being confined together to protecting a mobster informant; wonderful juxtaposition of the family unit mirrored in their confinement; The Takeover tackles riots and had a siege on the police headquarters with only Francisco on duty; Three To Tango showcases religious fanaticism and its consequences; The Game follows the aforementioned 'Russian roulette' game that Francisco was involved in; The Spirit of '95 involves the struggle of the Newcomers trying to attain the vote, wonderful historical story lines involved; Eyewitness News has a camera crew following Francisco and ends with a poignant message about media influence and exploitation as relevant now as then; Real Men deals with steroid abuse and the conflict between stereotypical male behaviour compared to Tenctonese men. The overall story arcs keep a sense of stability to the show, you want to come back and see what happens. The season actually ends on a cliff hanger. However, it seems Fox never know when they have a good show on their hands, because after critical acclaim, a cult following and many awards the series was pulled after only twenty two episodes. You'd think they would have learned their lesson, but this still happens, Firefly anyone? Still, there was good news, such was the outcry from the fans that Fox did revisit the Alien Nation, but this time with five TV films; and I can't wait until they come out to complete this set.

In watching this show, again, I was struck at how human the story lines are; we as a race have a bloody history and the show seems to say that no matter how much we believe we have advanced, really we are still a stones throw away from cavemen. This show aired in 1989/1990 with themes that were relevant and struck a cord with oppressed or struggling minorities; watching again in 2006 the show is still as relevant. It is hugely impressive television so it is a bit of a shame then that the set itself is a bit of a let down. Twenty two episodes on six discs, but double sided discs at that, one wonders why? Plus there is such a lack of extras, again why? I'd have preferred a much neater set, improved picture and sound on DVD9's and a host of extras, but we can't have everything. As it is, fans will snap up this set because the show itself is well worth it.