What a difference an "s" makes 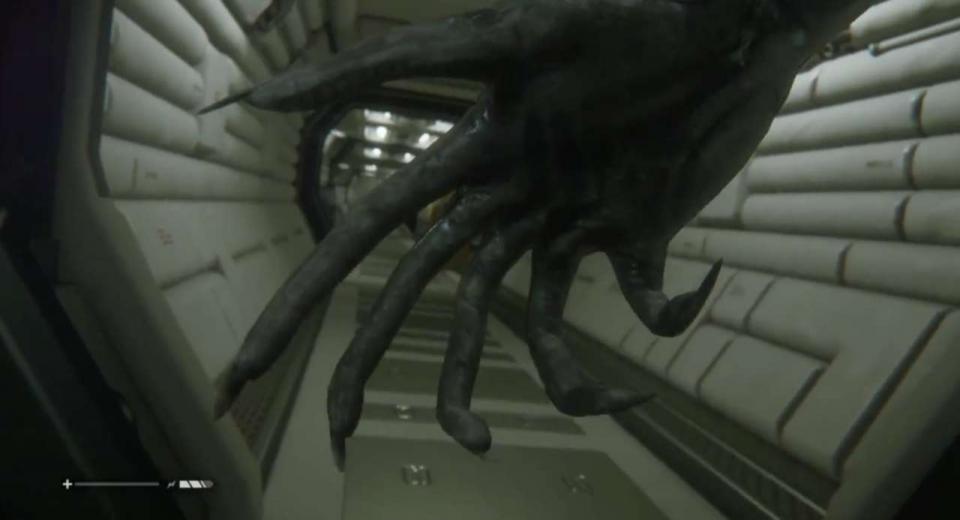 Back to the future

From the moment the distinctive 20th Century Fox logo flickers onto the screen Alien: Isolation begins to erode any doubts or preconceptions you may hold after last year's disastrous Aliens: Colonial Marines. While the 2013 entry did a poor job of embodying the "Aliens" action vibe from James Cameron's 1986 movie, Creative Assembly wisely stepped back and took inspiration from the horror based 1979 Ridley Scott classic. As such, the equation "Isolation is to Colonial Marines as Alien is to Aliens" would be an apt comparison, if Colonial Marines wasn't such a poor adaptation of its source material.
Isolation is to Colonial Marines as Alien is to Aliens
Depending on your approach this may or may not appeal to you. If you're looking to become the ultimate bad ass, complete with smart missiles, phase-plasma pulse rifles, RPGs and sonic ball breakers then move right along; Alien: Isolation is not for you. Our protagonist Amanda Ripley is far from a bad ass, she is merely a no nonsense technician looking for answers regarding the fate of her mother Ellen, who disappeared on the Nostromo 15 years ago, a trail which leads her to the eerie corridors of Sevastapol Station.

The decaying station is a direct example of how much detail and attention was put into not only making the game look impressive, but more importantly visually accurate. When it comes to evoking the feeling of an "Alien" movie, Isolation is easily the best attempt so far. The consistency of the "old future" design is admirable; from the chunky plastic of the CRT green screen terminals through to the scan line infested inventory screens; it feels like you are now inhabiting a universe you once simply observed.

Hunted not the hunter You are now inhabiting a universe you once simply observed
The problem is you aren't the only one. After a slow introduction to the world your titular nemesis is finally introduced and proceeds to stalk and haunt you throughout your time on the station. There is no killing it, you are progressively provided with ways to deter, distract and escape it, but most of your time will be spent cowering in lockers or peeking around corners in hopes of finding a path through the environment which will lead you away from the danger and towards your next objective.

Which isn't as easy as it sounds; with the AI of the Alien designed to intelligently track you down, responding to noise, light and changes in the environment such as open hatches and doorways. It creates a tense atmosphere as you use the iconic motion sensor and the obligatory flash light to navigate the environment. Constantly aware that those very things act as beacons for the Alien to home in on, a delicious risk reward theme which frequently rears its head. Saving is equally as dangerous, with manual save stations forcing you through an excruciating waiting period before allowing you to bank your progress, during which it's entirely possible you can be attacked and cruelly sent back to a previous long lost checkpoint. Stealthy to a fault?

In this aspect Isolation suffers from the same issue many stealth based games run into, it can be frustrating when the difficulty seemingly spikes and you spend far too long repeating a single encounter to the point where it stops being a scary situation and simply turns into another AI puzzle. There are other threats inhabiting Sevastapol, with humans and the freaky "Working Joe" androids who - unlike the Alien - are susceptible to your melee attacks but still pose a significant threat.

Much of the game's lengthy 20 hour time appears to be spent hiding in lockers, under tables or round a corner waiting for the AI to lose interest. When played in short bursts I found these moments had the potential to be just as tense and exhilarating as they were intended, whereas other times - usually during longer sessions - they would lose their novelty and occasionally become irritating.

As you explore the station you will find various materials which can be used to craft distraction/disorientation devices, such as flash bangs and EMP grenades, and some deadlier ordinance in the form of Pipe Bombs and Molotov Cocktails. Making use of the things you find around the station is essential, maps reveal hidden areas or highlight alternative routes, stations around the station can be used to power systems on and off to your advantage. All of these - added to your trusty motion detector which also acts as a GPS guiding you to your next objective - mean that although you are incredibly weak, as long as you are cautious and patient, you will survive. Although you are incredibly weak as long as you are cautious and patient; you will survive

It's hard to quantify just how scary Alien: Isolation actually is. That will depend on a whole host of factors not even related to the game, how susceptible are you to, say, anxious waits while rising strings scratch away at your sanity? What time of day do you play it at? How often do you have to replay each encounter before it loses its impact? All things being equal, when Isolation gets it right it can certainly be a dark and foreboding experience, especially if you can disconnect yourself from the obvious tropes that litter the world.

Warnings scrawled on the wall in blood declare all hope is lost, goal posts are constantly moved as "one more thing" constantly needs to be fixed or retrieved just before disaster strikes again, and panicked human beings in the middle of a crisis seem to have no problem leaving audio logs around just for someone like you to find. These things can at times break the illusion, however if you give yourself over to the game and embrace the experience it is trying to deliver you'll find a survival horror game near the top of its class.

Outside of its lengthy campaign there is little else to the package, Survival Mode simply drops you in a level with various objectives to complete while once again evading and escaping the clutches of an ever present Alien. The smart AI does give both the campaign and the Survival mode some re-playability but as thin as they may be, without the constant breadcrumb of the story beats Isolation loses much of its wonder upon repeat exposure. Even if your heart can take it, I would suggest devouring the campaign in frequent but short chunks, taking in as much as the impressive environment will offer but not staying long enough for it to become mundane. How susceptible are you to, say, anxious waits while rising strings scratch away at your sanity?

Alien: Isolation knows exactly what it wants to be; from painstakingly recreating the feel of the first alien film - by delivering a faithful reproduction of its lo-fi version of an 70's future - to its steadfast adherence to its stealth underpinnings. In the spectrum of games in the franchise, it has come closer to the game fans have been wanting than anything ever before.

The game itself requires some concessions from the player to leave the curtain in front of some potentially distracting blemishes, and elements of its stealth design ultimately fail to stand up the the test that its lengthy campaign ask of it. Yet it remains an excellently constructed slice of the Alien universe which at times is as frightening to inhabit as it is stunning to look at.