A bona fide classic; unrivalled by anything at the time, and unmatched by any of its sequels 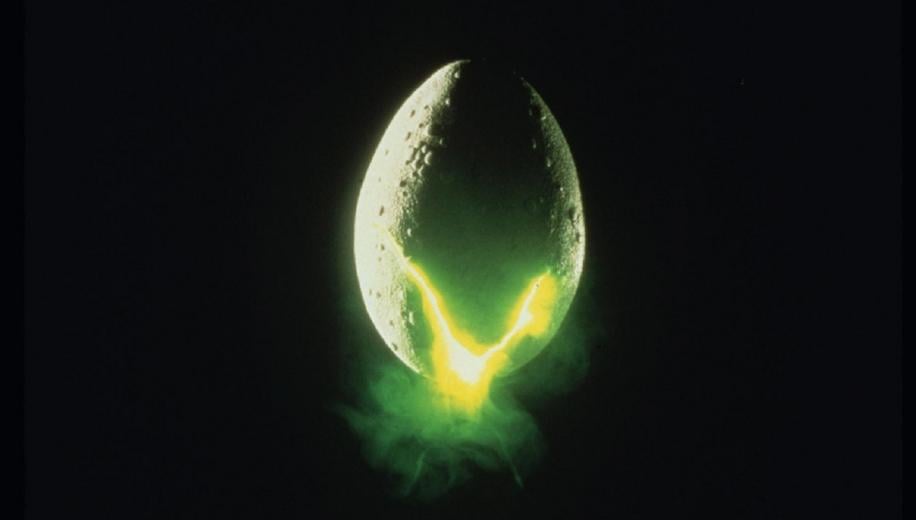 I can't lie to you about your chances, but... you have my sympathies

Back in 1979, a young ex-BBC designer, TV, and advert director, on the back of just one feature, was given the chance to direct what would become the greatest science fiction horror film of all time. His background in design helped shape the style of this film, though he cannot take all the credit; a huge wealth of talent was brought to bear as producers wanted to capitalise on the latest sci-fi craze in the wake of Star Wars (1977) and Star Trek (1979), with the likes of Swiss artist H.R. Giger and shooting from a script by madcap writer/director Dan O'Bannon, a perfect storm was made and Alien was born.

The story is actually incredibly simple and draws on the small group trapped trope, used ad infinitum in the horror genre – freight workers travelling through space are hunted by a creature they have no way of stopping, but where the film succeeds so well is in the detail of the attack. Giving a life cycle to the alien, that of gestating its embryo inside a human host (giving rise to the classic ‘chest-burster’ scene) was a genius idea from O'Bannon (drawn straight from some wasps in nature) and one that had not been used to such effect before. Build a world around that; the inhospitable planet, the room of eggs, the unexplained derelict spacecraft (we ignore Prometheus) which are pieces of a puzzle that are not needed in the narrative of the film, but give a presence and being to the realism of the piece.

Add to all that Ridley Scott’s almost maddening habit of framing a scene on the spacecraft once the fully grown alien is at large: that of looking over shoulders, centring on the dark corridors or hidden parts of rooms so that, as an audience trained to look for scary things in dark corners, our eyes are drawn – you expect to see something, but you never do. The tension in the film is unbelievable, it simply does not let up. The monster is barely seen, indeed there is hardly any gore; Scott allows the audience to use their own imaginations to fill in the gaps, and, as such, the film becomes so much more. And even when you think it’s over, it isn’t. What happened to the cat?

Alien is rich with ideas; it took its subject matter seriously and has rightly become a bona fide classic, unmatched by its peers. None of its sequels even come close (Aliens nearly does, but it is a very different film) and the less said about prequels the better. Stick to the original, ignore even the so called ‘Director’s cut’, as it won’t let you down. Alien was shot using a combination of Panavision PSR R-200 and Panavision Panaflex cameras on 35mm film. The source for this release was made from the original camera negative which was scanned at 4K resolution and then utilised for the creation of this Ultra HD Blu-ray release. The disc presents a native 4K 3840 x 2160p resolution image in the widescreen 2.35:1 aspect ratio, and uses 10-bit video depth, High Dynamic Range, and is encoded using the HEVC (H.265) codec for HDR10+. We reviewed the Region free UK Ultra HD Blu-ray release of Alien on a Panasonic 65DX902B Ultra HD 4K TV with a Panasonic DMP-UB400 Ultra HD Blu-ray player.

Oh my, oh my. This new scan is not a revelation as such (the film has been treated very well on disc in the past), what it does do is bring out the inherent picture quality, giving the image a whole new look that is simply gorgeous. Detail is improved, albeit only slightly, so things like skin texture (beads of sweat on Ripley’s fingers, white fluid running down Ash’s head, blood stains on Lambert’s face) are crisper and better defined. Clothing weaves are clearer, be that uniforms or environmental suits, while the Nostromo’s various rooms (dining table, corridors, sleeping chamber) are beautifully defined and sharp.

But it is with the HDR and WCG that the real revelation is; everything has so much depth now – the red behind the corridors' wall gratings has never looked so fine, the saturation of the lighting during the self-destruct sequence (oranges, greens and blues) as Ripley makes her escape. Look at the lights of MU-TH-UR in her console room or the depth of green to her screens. Check out the heat from the flame throwers, or the pure ickyness of the internal features of the face hugger.

Add to this the new black level and you have something truly spectacular; there are depths to the frame previously unseen, there are shadows beneath which help to elevate the colours, again I point to the corridors. The white level is also sublime, the stasis/hypersleep chamber or Ripley’s space suit, show new details and nothing clips.

So with all this good, there has to be some bad right? Well, yeah, kind of. There has been a slight shift in the colour pallet, nothing drastic and I actually think it has improved things giving even more realistic nature to the colours. But there is also the grain. Grain has always been a feature of the film, it gives it that organic look and is integral to the look, but on occasion (specifically where the frame is quite white, such as in the stasis/hypersleep chamber in the beginning) the grain does take on a life of its own, looking suspiciously like noise. To be fair, this has always been the case, but the UHD seems to highlight it, drawing the eye slightly. Maybe I’m making too much out of what amounts to a few seconds, but when the picture is this good, something off simply stands out. Is it a deal breaker, certainly not, indeed the image is, in all other regards, perfect and I am going to score it as such. Unfortunately, there's no upgrade to Dolby Atmos or DTS:X, just the same, masterful English DTS-HD MA 5.1 track that adorns previous releases. Given the quite wide separation, the mix never fails to engage you, whether that is moving through the empty ship in at the beginning, with air movement, or computer terminals humming to life, or the sonic blast of the alien planet air shooting in the air lock, to the self-destruct sirens. The flame throwers shooting down and through the air ducts, the clinking of chains or drips of water; there are some wonderfully realised effects that maintain a decent sense of realism throughout.

The score comes through with all its haunting melody, making full use of the speakers, while dialogue is locked to the frontal array. Bass is well held, adding some good depth to the surround stage (the throbbing of the spacecraft engines is a hoot) while keeping a sense of space. Silence is also a terrific part of the sound design and is faithfully reproduced here. The extras can be found on the included Blu-ray and the UHD, and they are identical, all having been seen before on previous releases. There is not a lot that hasn’t already been said about the masterpiece that is Alien; incredible design, clever story, perfect pacing and genuinely horrific - the film is a Bona Fide classic; unrivalled by anything at the time, and unmatched by any of its sequels.

As a 4K UHD set, the package from Fox is pretty good; the native 4K picture is quite breath-taking in terms of detail and especially colouring and black levels, both of which bring out the depth of the image. The DTS-HD MA surround track has been heard before, but it gets everything right, so is on the money, and whilst the extras are recycled and relatively barebones considering what’s out there, but the film, with this picture, is worth the purchase regardless.