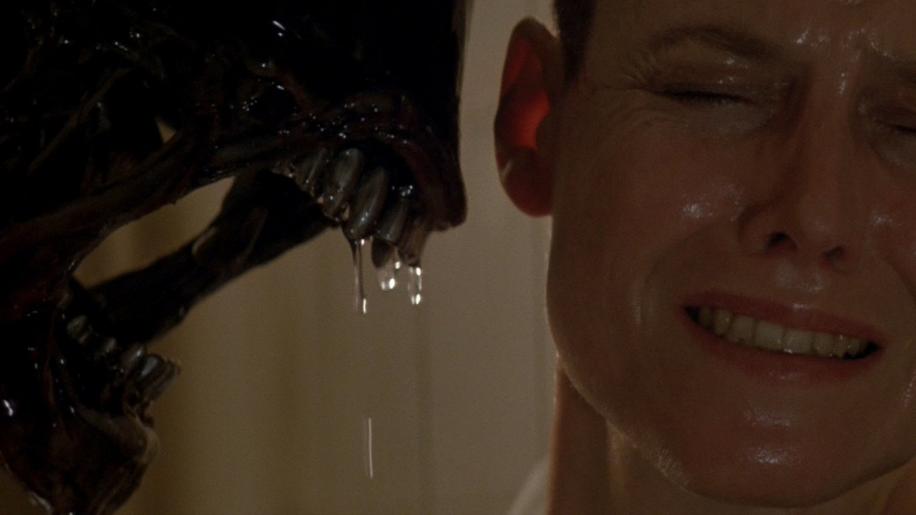 Filmed and presented in a ratio of 2.35:1, this is a reasonably good transfer. I will admit, I was unimpressed with the Aliens Ultimate Edition picture, but this one is infinitely better. Colours were spot on, black levels were spot-on and especially considering this is quite dark in places, it holds up rather well. The print is spotless (good news) but it's still a little grainy in my opinion (bad news), but it's nowhere near as grainy as the aforementioned Aliens. I didn't notice any edge enhancement, but then I may have been too much in shock over the terrible composite effects, which didn't fit in with the picture itself. Definitely a step up from Aliens anyway.

Let me be frank here, the most obvious reason for looking at this disk is because, unlike the rest of the globe, Japan had all 4 movies in DTS, whereas everyone else only got 2. Now is this a good reason for grabbing this disk - well, the DTS mix in Aliens didn't make to my ears all that much difference, but as with the picture, the DTS mix here is definitely an improvement, not only on the Aliens mix, but over the Dolby Digital mix also. Firstly the bad news, which is you can tell by the audio where the new footage was added, as it seems to focus primarily out of the centre channel, as well as being generally quieter. The good news however, is that the DTS is more alive sounding than the Dolby mix, with more emphasis on bass tones, not only via LFE but in general. Yes, as with most DTS mixes, it is noticeably louder, but it's also more natural and gives a tad more depth. The Dolby mix, while not quite as impressive, is as equally good here as it is on the other region box sets. But for my money, due to general improvements in tone, both natural and bass, as well as a fuller soundstage, the DTS pips it.

The first disk is completely bereft of extras, not surprising given the DTS soundtrack which somewhat fills space! To be fair the extras present appear to be the same as the ones found on the Quadrilogy versions for UK/USA but I'll break it down for those unfamiliar. The second disk contains 4 sections for the extras, which being in Japanese makes it exceedingly hard to navigate. The first section is essentially a “Play All” for the other 3 sections (which is how I viewed it) and in total they last for about 165 minutes. From pre-production to post-mortem, special effects to filming, it's pretty much covered here and I have to be honest, kudos to Fox for including quite a blunt and frank set of features which explain how fraught with conflict and problems this movie was - to hear Fincher effectively defended because he didn't have a script when he started, which is well known, but to actually hear it on a Fox disk is kind of spooky. In fact, Fincher is only seen from the point of being filmed whilst filming, again distancing himself from the project totally. His crew, from stars to artists and everyone in between have nothing but respect and good words for him, realising that if you don't have a script, it's really difficult to have a movie and he did the best he could (arguably better than possible) with what little he had to work with. Fox themselves, don't get off lightly from being looked down upon due to their interference, but at least here, they don't shy away from it by including these comments. The biggest annoyance here is that the subtitles are burnt on and can't be removed (even when setting subtitles to “Off”). The other 2 options in this part of the disk are text screens, in Japanese, which means I've got not one clue what they say!

After you either watch the whole thing, or in sections, the only remaining extra is a photo gallery, but to be honest, you'll be pretty exhausted not to mention feeling somewhat having gained a far greater insight in to the making of this chapter in the quadrilogy. This is definitely one of the best extras on disk I've seen, not just for the depth, but for the honesty of the participants and for Fox to be brave enough to be that open about it.

A much maligned, hugely criticised and very different movie than one expected, this is something that has definitely aged better than most as well as needing to be seen in this fuller vision for it to be truly coherent. Some may argue that I am being far too kind, but I will disagree as to me, this was a brave attempt at moving away from guns'n'ammo and into an almost apocalyptic vision of the future of mankind. It's not going to be for everyone's tastes, but to ultimately bash the movie for where it failed to be in-line with its predecessor is to not view the film on its own strengths, those being a dark, downbeat movie, with much more in common with the original than the no-brains action movie that came afterwards. The DTS soundtrack is certainly better than the Dolby but there are issues with the soundtrack due to the extra bits inserted, but given that you can't have everything, this is definitely worth grabbing hold of.