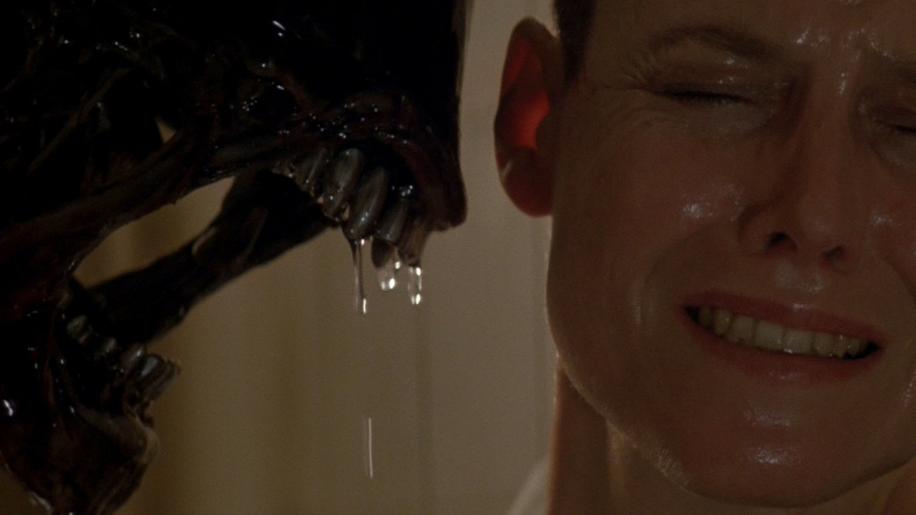 Alien 3 is without a doubt, the most argued over movie in the Alien series. Sure, Alien vs Predator is in some ways the most mentioned recently, but it's generally considered that that travesty is distanced from both franchises completely. Heck, even director David Fincher, whom made his debut here, has disowned this movie. But is it truly that bad?Following the events of Aliens, Ripley crash lands on Fiorina “Fury” 161, a Double Y Chromosome-Work Correctional Facility (or in English, a prison planet). However, this planet only houses 25 convicts, whom although were murderers and rapists, have now found god (although which one, I know not). Ripley however is the only survivor, as Newt and Hicks have both died in or before the crash, and is ultimately rescued and saved by the aforementioned convicts as well as by Clemens (Dance), the facilities doctor. Believing that she has finally escaped the titular villains, she is notified of her imminent rescue, but soon one or two convicts are killed with some rather similar xenomorphic hints as to the killer. Soon enough, it's down to Ripley and the convicts to rally together and take out the alien, but revelations emerge that soon changes the plot.

I've skimmed over the details, as we've all seen and read numerous reviews for this movie. Unlike the Quadrilogy version, we have here purely the longer cut of the movie (it's not a Directors Cut, if the director walked out during the editing procedure back in 1992) and while it fleshes out the story, it doesn't in all honesty, make that big a difference. Yes, it's the preferable version as it is more coherent, but I never truly had much of an issue with this particular movie. I think that some people were expecting Aliens Pt 2 and received a completely different movie - one that has an hour ultimately of character development followed by the “action”, although it's more claustrophobic in the vein of the original than the all-out shoot 'em up of the second movie and therein lies issue number one in the minds of most people. They've forgotten the tension and horror of the first, preferring the gung-ho action of the second and then criticised this movie unjustly. What's wrong with being daring and trying something new? Nothing as far as I'm concerned but then again, you can never please all the people all the time. Which is an opportunity to quickly point out critics - they complain if they get the same old, same old when it comes to sequel-itis, but when it's something different and completely unexpected, they moan that they deviated from the tried-and-tested formula. How can movie makers win with that attitude? Anyway, this is definitely a gorier movie than the first two and in some ways, more violent - the attacks are more random, less anticipated and although you see a little more of the alien in this movie than the first, you do see a lot more in terms of the actual attacks. This just adds more of the originals feel, as well as being isolated in this prison, consisting of labyrinthine tunnels making the atmosphere much tenser. The only hiccup is can you get over the preconceptions of expecting Aliens Mk 2?

In terms of direction, this may have been Fincher's first movie, but you can see plenty of the skill that served him well in his second movie (and my personal favourite movie) Se7en as well as in Panic Room, again visiting a limited environment with the tension levels cranked up. Weaver is suitably convincing as Ripley yet again, although not quite as good as in previous efforts - perhaps the behind-the-scenes issues were draining on her as equally as they were on Fincher? The supporting cast is perfectly fine, with some great British actors such as Charles Dance, Paul McGann and the late Brian Glover all on fine form. As mentioned there isn't anything wrong with the movie in terms of functionality, only the fact it is judged mostly on the preconception of the previous movie. Get past that and this is actually a much more enjoyable movie than originally thought, in fact, I'd venture that I actually think more of it now then I did when I first saw this at a dodgy Warner Brothers cinema.