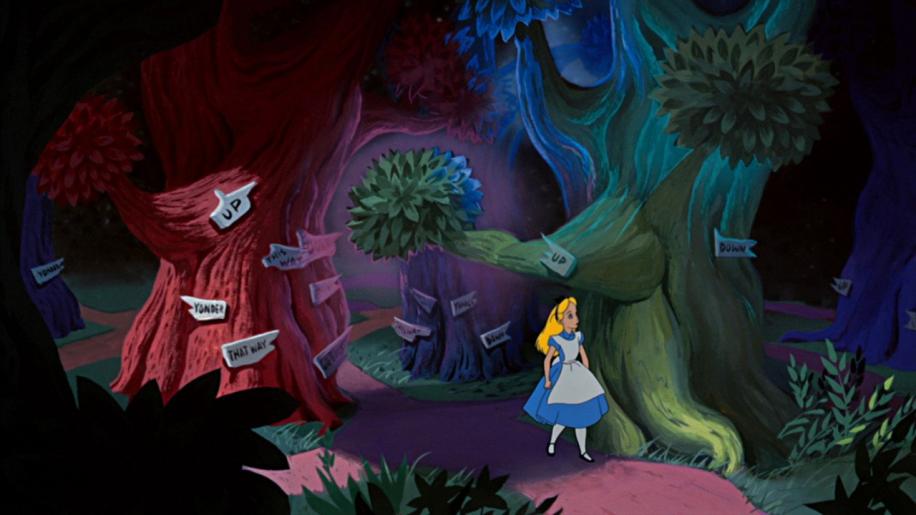 I don't own lots of Disney movies really, mostly the new titles such as Aladdin and The Lion King. I have however got Bambi which seems to have people saying how nice the picture is. I'm saying this simply to illustrate my point of reference, as to compare it to other animation, such as Nemo, would be a tad unfair. This is superior to the Bambi transfer without a hesitation. Blacks are deep and rich with colours particularly vivid, from Alice's blue dress to Tweedledee and Tweedledums red hats and trousers, literally popping off the screen, which hide its age amazingly well and no colour bleed is present. The print itself has been restored amazingly well, with almost no dust or specks present, indeed it looks practically new. Artefacts are not present and halos are thankfully non existent and the detail levels are fine, accepting the limitations of hand drawn animation. This is a simply superb transfer and is far superior to what I would have expected. In some ways, this soundtrack disappoints but then again so did Bambi's to me. From mixing the source material from its original mono sound to a 5.1 soundtrack, I can appreciate the new mix but it's not (or certainly doesn't sound like) a real 5.1 mix. The dialogue is clear and crisp from the centre channel, while music is pleasing and sounds better than it should for its age. LFE use is either non-existent or used sparingly that it failed to be noticed, although this isn't a soundtrack that really needs it. Surrounds are the main disappointment thought, as they are used really for enhancement of the music and are particularly quiet compared to the other channels, so much so I had to check they were actually working! I hate sounding harsh, as the soundstage from the front is very good and clean, but the rear channels let it down for me, hence my slightly harsh mark. Shame they all can't sound like The Lion King's mix. There's a large number of extras present including 2 games for kids, which managed to keep my attention for 30 seconds combined, but young children will probably enjoy them, if you're foolhardy enough to give them the remote control! A rather old “making of” is present featuring Walt Disney himself and if you thought that the movie was akin to an acid trip, brace yourself! I'm sure it was fine back in the day, but I was looking for any traces of powder on the tea party table (you'll see what I mean). 2 songs are present as extras, possibly for karaoke and a third newly found song, “I'm Odd” as sung by the Cheshire Cat is present, which also gives a fair contrast between the restored movie and the un-restored footage. It sounds a little too modern in its execution and wouldn't work, in my humble opinion, in the movie in the form it is presented here, although it does fit the Cat totally. “Thru The Mirror” is essentially a short cartoon featuring Mickey Mouse as he dreams in his bed after reading the book of Alice in Wonderland. I'm sure it'll please a lot of Disney fans out there! Rounding things off are a few small featurettes about other songs that aren't present and an art gallery. Well it's Disney isn't it? You either love to reminisce or you want to share your childhood memories with your children. Speaking as someone who can't do one or the other, I can honestly say that as a movie for children, it's not bad. As a 50 odd year old animated movie (cartoon is not doing it justice), then this transfer is one of the best I've seen for both an old movie and a Disney re-master. Soundtrack issues aside, which kids won't really care about, this disk is probably the best it's ever been seen and that's as good a recommendation as it can be given.