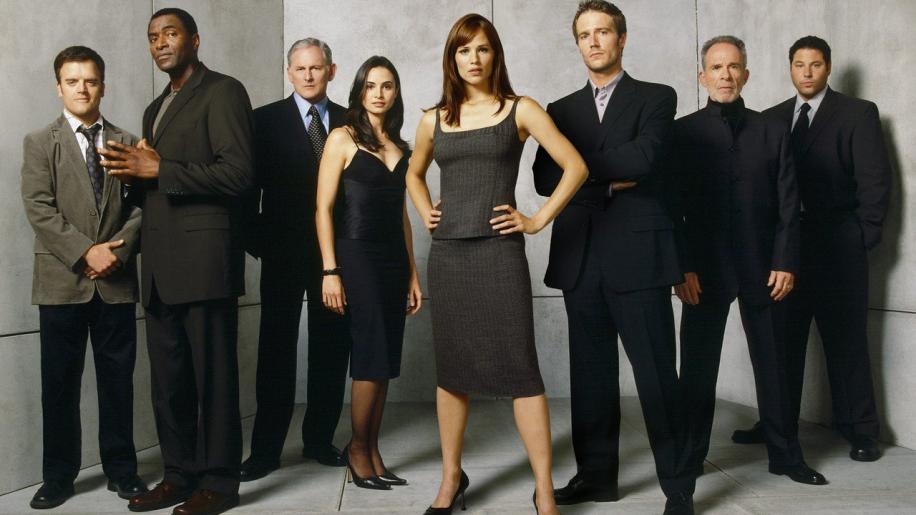 With high production values, this is a great, but not amazing transfer. When it's good, it can rival some of the more impressive movie releases, but as it is a TV show, we have to rely on their technology and in some episodes and scenes, it is somewhat let down with graininess, which isn't a fault of the transfer. Blacks are deep, colours are vibrant and flesh tones are suitably correct, with no obvious edge enhancement and only occasional artefacts being present. But, and this is a huge but, the grainy scenes really do mar the quality of the disk for me, as it shows inconsistency through the making of the show, witness one scene where we are inside the Black Ops HQ, pristine and gorgeous looking, with no faults, but just prior to that, we have a scene with Sloane and it is abysmally grainy. What makes it worse is that in the same scene, we again have a pristine image of Sloane et al. in the same location, it is only when another camera takes a close up for a different type of shot that we get this hideous grainy image. So, while for the most part it is good, these moments are too numerous to not make an impact on my marking. Sorry, but must try harder. As with the other seasons, we again have a Dolby 5.1 soundtrack, but unlike the other seasons, I found this to be less dynamic. This could possibly be complacency on my part, as having heard a lot more shows in 5.1 since the original season, maybe I'm getting harsher. Still, there seemed to be less use of the surrounds than on previous seasons and the LFE was flatter on the majority of explosions as well, which was a shame as I thought they should have a much more satisfying boom to them. Dialogue however was perfectly fine and clean as is the norm for this show and was not drowned out by the other speakers, but I can't reiterate that this isn't as impressive as the other seasons.

A Conversation With Jennifer Garner is a 6 minute featurette where the producer catches up with Jennifer and they have a little chat about the season as well as reflecting on her experience with directing an episode. Not bad and quite candid really, as they seemed to be relaxed and genuine.

Meet Mia: Syd's Little Sister runs for just under 4 minutes and features on Mia Maestro who plays Nadia Santos, Syd's sister in the show, who could well be Jennifer's replacement should she quit. It's a little gushy with her giving plenty of kudos to the other actresses and actors on the show, but she's obviously enjoying her stay on the show, although she informs us she will be in Season 5 but not as a regular.

Alias Bloopers is a blooper reel that runs for a shade under 12 minutes, of which the vast majority are basically giggle fits more than anything else and ends with a plug for Lost Season 1. It's probably the most fun you can have watching Ms. Garner in a fit of giggles at any rate.

Anatomy of a Scene has two scenes dissected - The Train Fight and The Chopper Escape. The Train Fight lasts for just under 7 minutes which shows how the CGI and live footage mix in together, as well as how it was all implemented (how to make a train move, when the train isn't moving) and is quite interesting from the special effects and CGI to how the fight was choreographed. The Chopper Rescue runs for 4 minutes and is effectively more of the same.

Deleted Scenes contains a total of 10 deleted scenes, which can be played separately or all together. They run for a touch over 11 minutes in total and are cut purely for running time instead of anything else (ahhh, the constraints of Television), but neither do they really add anything, in my opinion.

Director's Diary runs for almost 14 minutes and revolves around the episode “The Descent”, particularly the scene revolving around the stained glass floor, as well as highlighting the 2 major plot points in this episode. It's interesting enough, but nothing amazing due to the focus on the one scene.

Guest Stars of Season 4 is a 12 minute feature which focuses on the guest stars, shockingly. It gives about 2 minutes per guest star, from Angela Bassett to Lena Olin and is a little gushy (particularly Ms. Bassett) but it gives an insight into why some of the actors choose to take these roles.

Marshall's World is a 17 minute featurette which is effectively a making of/behind the scenes and is presented by Kevin Weisman a.k.a. Marshall (hence the title). It's quite interesting with some good humour between the case and crew. I enjoyed this, as it was quite fun to see how the cast click.

Agent Weiss' Spycam is a 6 minute featurette, which is basically some behind the scenes photos, taken by Greg Grunberg who plays Agent Weiss. It's basically an opportunity for him to take pictures you wouldn't normally see, plus he's quite modest as well with his praise of his co-stars. There are also commentary tracks on 4 of the 22 episodes. Well, it's not the strongest season, in fact I'd argue it is the weakest to date, but a weak season of Alias is still much better than a lot of shows out there. In terms of a check list, we have Garner looking great, plenty of espionage and many revelations, but due to them removing, for most of the season, the plot device of Rambaldi until we get well over half way through when things start falling into place certainly weakened the show for me, as it has always been about two things Sloane/Rambaldi and Syd and her family. Without one of these driving the show, it did make me wonder what was going on, and indeed, with the finale, I am wondering where it is going. Still, much entertainment for fans but you really need to see the show from the beginning to get the most out of it. Oh, by the way, I absolutely hate the new theme tune.