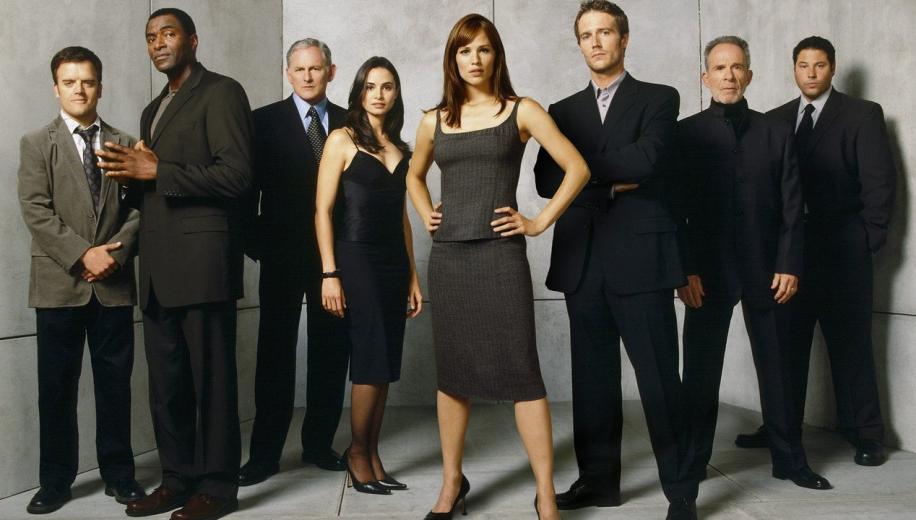 Remember Christmas as you were a kid, where you'd see your presents, be all excited, open one thinking it was going to be that thing you always wanted (well, for that year anyway) and finding that it wasn't it and neither were the other presents? Well that's sort of how I felt after this season of Alias.

For those who don't know, here's a synopsis of what Alias is about, without any real spoilers. Sydney Bristow (Garner) is a spy working for a group called SD-6, which is led by Arvin Sloane (Rofkin). SD-6 is supposed to be a branch of the CIA fighting the bad guys, only problem is Sydney soon finds out that in fact, SD-6 are the bad guys working against the CIA. Does she get mad? Well no, she actually goes to Langley and becomes a CIA agent working inside SD-6. If this wasn't bad enough, Sloane's right hand man is Jack Bristow (Garber), Sydney's father, who definitely has a rather ruthless streak to him. However, it's not all Spy vs. Spy - Sloane is trying to assemble various artefacts by Rambaldi, a prophet of sorts from 500 years ago - think Nostradamus meets Da Vinci in terms of who he is. So, between CIA, SD-6, other bad guys, plus a deep, dark past all revolving around Sydney, her family and Sloane, that's the basic premise of Alias - without expanding too much beyond the first season. However, this is season 4 and much has happened, so, if you're new to Alias, I strongly suggest skipping the next bit, as it won't do you any favours in enjoying seasons 1-3 (which, by the way are superb!)

SPOILERSAfter the revelation as the end of Season 3, where we learn that Jack has killed Irina and Sydney has a sister in the form of Nadia, we get another reboot for the show, in a similar way we did in Season 2. Sloane is now the head of a Black Ops team, Jack again his right hand man and Sydney is recruited, however for the bulk of these episodes, it seems we're not really going anywhere in relation to the previous three seasons. For over half the season, nothing is mentioned of Rambaldi, his artefacts or anything else, but it eventually does come full circle. We meet some of our old enemies again, such as Stark and Anna Espinosa, so in a sense we feel it refers back to what we know (and indeed love) about the show, but it just seems to be going nowhere, until we get to the final quarter of the season, with the appearance of Sloane, or rather another Sloane. This is actually when this season gets really good, not that what before it isn't, but rather the last 5-6 episodes bring us back to the story we've followed for the last few years.

End Of SpoilersIn terms of quality TV, Alias has been pretty much at the top of my list, beating 24, because it was consistently good, but this season has wavered. Don't get me wrong, the production, scripts and acting are still as good as they were, my criticism for this season is that it lost its way for a large part of the season. Sure, Garner still manages to wear revealing costumes as per the last 3 seasons, Marshall geeks out as usual and Sloane is his usual is-he-evil-or-not self, but some of the episodes don't feel quite right - for example the Kill Bill episode, where Sydney is in a coffin, buried alive feels like a reason to give Marshall a more action-oriented episode rather than progressing the actual show, not to mention the actual “rip-off” feel it has - even though we've seen the buried-alive-in-a-coffin before Kill Bill did it. Having said that while it doesn't live up to the previous 3 seasons, it is still entertaining, from the “Nocturne” episode where Sydney isn't quite herself, to the 2-part season finale, where we feel we finally have some form of closure (or do we?) this is still one of the best shows on TV, but let's hope that Season 5 manages to build on the end of this season, rather than mirroring the tone of the opening ones.

Disk 3 - A Man Of His Word, The Index, The Road Home, The Orphan

Disk 5 - A Clean Conscience, Mirage, In Dreams..., The Descent

Disk 6 - Search And Rescue, Before The Flood