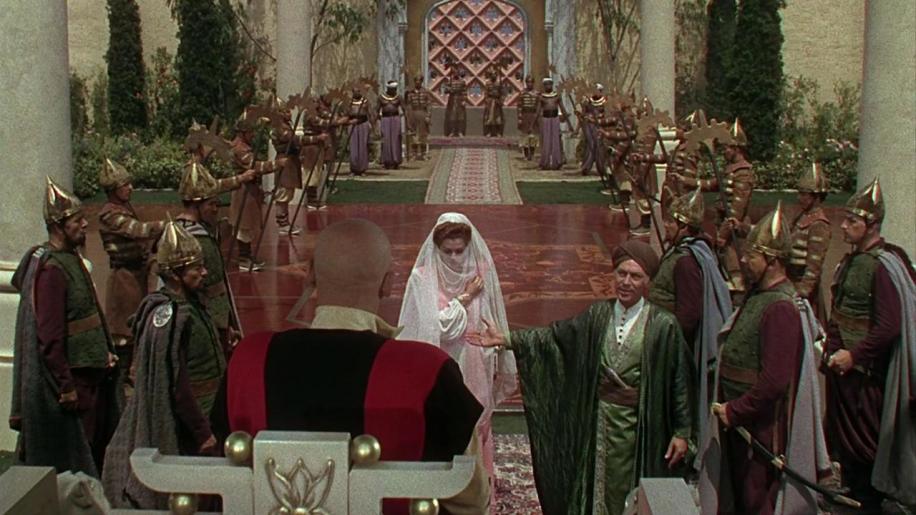 That hidden gem ‘Ali Baba and the Forty Thieves’ has arrived at long last on Region free Blu-ray. Is this a new CGI loaded fantasy adventure, I hear you all cry?
Nope, it’s the latest treasure to be unearthed by Eureka Entertainment and the first time it’s been available on a domestic video format in the UK. Eureka have a habit of finding movies that other distributors overlook and give movie buffs the chance to own a copy of a film that is rarely available.

When ‘Ali Baba and the Forty Thieves’ was released back in 1944, Hollywood and the rest of the world had its mind firmly fixed on the reality of World War II with all it entailed – rationing, worry about loved ones in the forces and the constant threat of attack. The producers at the major studios saw it as their task to give the public the chance to escape from all of this for an hour and a half and so a string of low budget Technicolor fantasy films were made. To lift the cinema going audiences from the doldrums, brightly coloured extravaganzas were dreamt up, calling upon stories from the Arabian Nights that were then ever so slightly altered as the scriptwriter saw fit or the budget allowed. The casting of ‘exotics’ in lead roles was another way of taking attention away from the pale grey world, so the career of one Maria Montez blossomed in this period. Dubbed ‘The Caribbean Cyclone’ by the Hollywood publicity machine, Maria turned out to be immensely popular with the public. Her acting skills may not have been appreciated by some critics, but audiences didn't seem to mind. They liked Maria and the dangers she faced in these cheaply made adventure flicks. Each desert film attracted droves of Montez fans to the box-office.
In ‘Ali Baba and the Forty Thieves’ she was teamed with Jon Hall, whose main claim to fame was that he was screen tested for the role of Flash Gordon, but lost out to Buster Crabbe. Also on the bill was Andy Devine, the rather rotund comic actor who later rose to fame as Jingles in Guy Madison’s ‘Adventures of Wild Bill Hickok’ before hosting ‘Andy’s Gang’ on American TV.
So much for the cast, what’s the story? As if you didn’t know.

In Baghdad, in the days of the Mongol invasion led by the cruel Hugalu Khan, the caliph Hassan is betrayed by Prince Cassim and killed by the Mongols. His young son Ali, who had just pledged love to Prince Cassim's daughter Amara, escapes and accidentally finds a magic cave (“Open Sesame”), the hiding place of forty thieves led by Baba. Ali is adopted by Baba, who assigns the strong Abdullah (Andy Devine) to protect him. For ten years, the Mongols hold Baghdad, and Ali Baba (Jon Hall) becomes the leader of the forty thieves, now beloved by the population for challenging the invaders. When the thieves discover that a caravan is bringing Lady Amara (Maria Montez) to marry the tyrant Hugalu Khan, Ali Baba meets her while bathing but does not recognize her. The Mongols capture him and he believes she betrayed him. Amara's servant Jamiel (Turhan Bey) helps Ali Baba escape, and the thieves rescue him in Baghdad and abduct Amara. In Prince Cassim's garden, they have recollections of their childhood, but they still do not recognize each other (Oh, come on!). When Ali finds the truth, he fights for his love and the freedom of Baghdad.

‘Ali Baba and the Forty Thieves’ is real fun to watch. It’s the kind of movie you probably saw on TV as a kid then never saw again. Great Saturday morning adventure. Now we get the chance to see it in all its Glorious Technicolor wonder – and it truly is wonderful. The colours leap off the screen at you courtesy of the three strip process invented by Chemical Engineer Herbert Kalmus. If you ever wondered who Natalie Kalmus was ( as logged in the titles of many Technicolor movies), well she was his wife who – as a Technicolor colour consultant – managed to offend almost every Art Director in Hollywood and so she was banished to England to run the UK operation where it was felt she could do less harm.

‘Ali Baba and the Forty Thieves’ was directed by Arthur Lubin, fresh from his success with ‘Phantom of the Opera’ the previous year. Prior to this he helmed several Abbott & Costello comedies which saved Universal from bankruptcy. In later years he moved into TV, directing episodes of ‘Bonanza’, ‘The Addams Family’, ‘Maverick’, ‘Mister Ed’ and ‘77 Sunset Strip’.
Probably his greatest creative contribution to ‘Ali Baba and the Forty Thieves’ is the title sequence where a sign writer has painstakingly painted the titles on a wall by a river, then some complete swine comes along and tips buckets of turpentine over them, causing them to be washed away.
Throughout the movie there are many wide shots that make use of matte paintings (scenery painted on 6 foot square sheets of plate glass placed in front of the camera) to save the expense of building large sets. Paint it on glass – job done!
The art of the scenic artist should never be run down though, as it takes great skill to do it effectively and it’s also a test for the cameraman to match the lighting on the glass painting to the background.

‘Ali Baba and the Forty Thieves’ looks great on Blu-ray and gives a new generation the chance to view it in a nigh on pristine version. Many movie collectors would give their right arm to buy a well used 16mm print of this type of film so it’s an interesting oddity in today’s high tech world and proof that movies from a bygone age can still be loved by modern audiences.

A rather sad addendum is that Maria Montez died of a heart attack only seven years after making this movie – at the tender age of 34. Her co-star Jon Hall committed suicide at the age of 64 to avoid the onslaught of cancer.