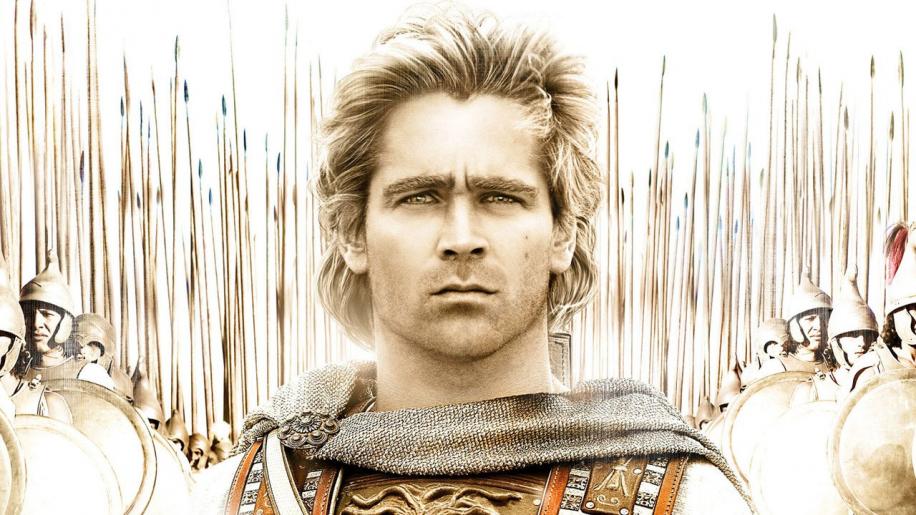 And so Oliver Stone's mighty pet-project, a cumbersome colossus of a movie, tumbles onto DVD after a harshly received theatrical run that saw critics literally savaging it and audiences (at least where I saw it) howling with derision. The tale of the warrior-king that broadened the horizons of the known world, a masterful tactician and courageous empire builder, has been told before, but never like this. Oliver Stone's grandly mounted epic places passion well and truly at the forefront - every single scene, every frame, every moment and nuance is so meticulously composed by a man quite clearly head over heels in love with his subject. Enraptured by his unique vision, it is this element, certainly, that proves to be his biggest obstacle in achieving success. He cannot see beyond his own infatuation and, in making such an intensely personal film, he forgets the blood-hungry spectators waiting to stab him in the back. Any historical epic made nowadays faces the challenge of convincingly recreating a time long forgotten and transporting the audience back into that world. But no amount of research, set dressing or attention to detail can ever mask the inescapable fact that a film, first and foremost, must tell a story and here, at least, is the trump card that defeated the critics. Because, Stone's operatic take on the Macedonian boy-king's turbulent life does tell a story, and it tells it well ... from a certain point of view. But it is not the story that a great many of us expected to see and it pulls it off only with a great many failings along the way.

Rather than playing by the accepted rules and giving us a proper biopic, Stone takes us on a wildly divergent and highly stylised journey through the emotional highs and lows of Alexander's rise to glory, wallowing in the inner trials that he undergoes - the many loves and betrayals, his impetuous self-belief and youthful arrogance and, above all else, the immense psychological stigma placed upon him by his demented parents and the haunting legacy of the many Greek myths that drive him ever-onward to greater and greater deeds. His Alexander is hugely troubled and forever teetering on the brink of madness. His Alexander cannot reconcile his dreams with the destiny that all around him can see, but are too afraid to voice. His Alexander is a confused, yet enlightened youth who, on the one hand wants to conquer the world, but on the other wants the world to love and adore him. His Alexander, on paper at least, is a great antidote to all the mythical, muscle-bound heroes that have rampaged across the screens in the last few years. But his Alexander, it appears, is not the one we wanted to see. By focussing more on his blunders - spiritual and tactical - than his successes, his heroics rarely seem to inspire, and for a historical figure that did just that in people then and now, it is a costly manoeuvre.

“It's never easy to escape our mothers, Alexander.”

With Braveheart, Gladiator (my all-time favourite movie, folks) and even Troy we have the template for our warriors of yore. Brash and brazen, maybe. Vicious and battle-hardened, certainly. But noble and heroic at all times too, with an honourable quality that inspires and excites us. But what have we here? Stone's Alexander should manifest all these qualities, too. But, save for two glorious charges into the chaos of dust and severed limbs and crashing chariots, Farrell'sAlexander exhibits virtually none of the above. This is the most unforgivable and damning failing of all. I'll come to the others later. I love Farrell as an actor, he has terrific charisma and screen presence. But here, he is hopelessly unable to rise to the powerful heights necessary to portray a leader who can galvanise his people into marching 10,000 miles from home. I'll admit that he tries his best though, really acting his little socks off. But ranting and raving, weeping and simpering, brooding and scowling for nearly three hours merely over-stretches his character into an annoyingly petty tyrant. His teenage tirade against his drunken and abusive father King Philip, played magnificently by Val Kilmer, is perfectly acceptable but when he acts just the same with his war-weary troops years later, you just want to give him a slap. The bottle-blonde hairdo and Irish accent I can live with (let's face it, if we want them to be historically accurate then absolutely nobody should be speaking English, anyway, so those naysayers can go hang) but his petulance is just not convincing. The incessant squabbling with his lieutenants, fighting and arguing with almost everyone that serves him never seems to let up. If this was the real Alexander, his empire would have ended just down the street. When I heard that Farrell would be playing the part, I applauded. But when I saw the finished performance I was mortified. Overkill blights what could have been his greatest moment.

“Come, Macedonians! Ride! RIDE!!”The ragingly wild Battle Of Gaugamela is where the film gets it wholly right. This is terrific, large-scale carnage with armies of tens of thousands clashing with all the brutality you could wish for. Alexander's strategic trickery plays out magnificently as he leads King Darius's Persian cavalry on a wild goose-chase. The moment when Alexander screams for his horsemen to turn and they sweep in en masse for the kill is pure cinematic exhilaration of the highest order, scored to an incredible, mesmerising perfection by Vangelis. Even the aftermath of the battle as Alexander wanders, distraught, through the stricken land of the dead provides a hauntingly eloquent, if harrowing, image. But this fantastic level of excitement will only return once more ... and then, only fleetingly.

“Where are those great Amazons of myth who dare to fight and kill men? Where have they gone?”

The ladies, folks, Angelina Jolie and Rosario Dawson are definitely as gorgeous as you would expect and certainly hold their own against the mighty hordes of manhood dominating the screen. Jolie, especially, relishes her role as Olympias, Alexander's devious, snake-charming mother. Her sly seductive, yet deadly, wiles add a deliciously oily threat behind the scenes, manipulating her son as her tool of vengeance against the persecution she has endured. Dawson, tremendous as Old Town warlord/hooker in Sin City, is hypnotically exotic and enticing as Alexander's barbarian wife, Roxanne, but the sexual chemistry between her and Farrell is non-existent, rendering their big love scene a ghastly disaster. Jared Leto as Alexander's trusted best friend, confident and/or lover is relegated to merely fawning over his King, and all manner of surly and duplicitous henchmen populate the sidelines, but just end up watching yet more tirades from their master. The backstabbing and scheming amongst the ranks is brought to the fore far too early, so consequently, there is no surprise at whatever skulduggery takes place. It's actually hard to tell exactly who cares for Alexander and who can't wait to put the boot in, when all around him, except Leto's Hephaestion, sneer and swagger, grumble and whisper. Stone has created a world that is savagely unpleasant, morally dubious and full of two-faced swine. When your heroes are full of contradictions and the director steering you through such a turgid sea is over-ambitious and smitten with ideals that his leading man cannot hope to attain, you can't help but founder, and not know which way to turn.

“Come, Bucephalus. Tis only sun and shadow. You and I together ... one last time.”

Perhaps, in the end, it is just best to settle for spectacle. For splendour. For the sheer exuberance of it all. When all said and done, Alexander is just grand opera, hugely dramatic and bellowed out with all the lust of life, love, madness and death. The era is painstakingly evoked - just look at the incredible and beautiful entrance of the Macedonians into Babylon. Experience the visceral terror of the elephant charge - the second and last highpoint in the movie and feelthe power of Vangelis' music take you to the places that Stone and his mistreated, misguided blitzkrieg cannot. Flawed but entertaining, elemental but meandering, Alexander still manages to evoke the timeless spirit of the warrior himself, and the myths that so betrayed him, with the poster-boy image of his mighty steed, Bucephalus, facing off against the Indian elephant war-wagon. In this one calamitous charge, Colin Farrell fulfils his promise and the film finally, but briefly, reaches the glory that should have been fuelling it all along.

This version is Oliver Stone's director's cut. The one that he was forced to re-cut once the theatrical version was so cruelly mauled. Shorn of several minutes and apparently re-structured and re-jigged, I have to admit that I can hardly tell what the changes are. The overall thematic verve remains the same and the oft-targeted bisexuality is still there. Thus, Stone's original cinematic integrity remains unaltered. And, for something that he adores so much, that is how it should be, despite what we may think. Ambitious and audacious, but fractured and flawed. Much like Alexander, then. Perhaps, Stone will have the last laugh, yet.