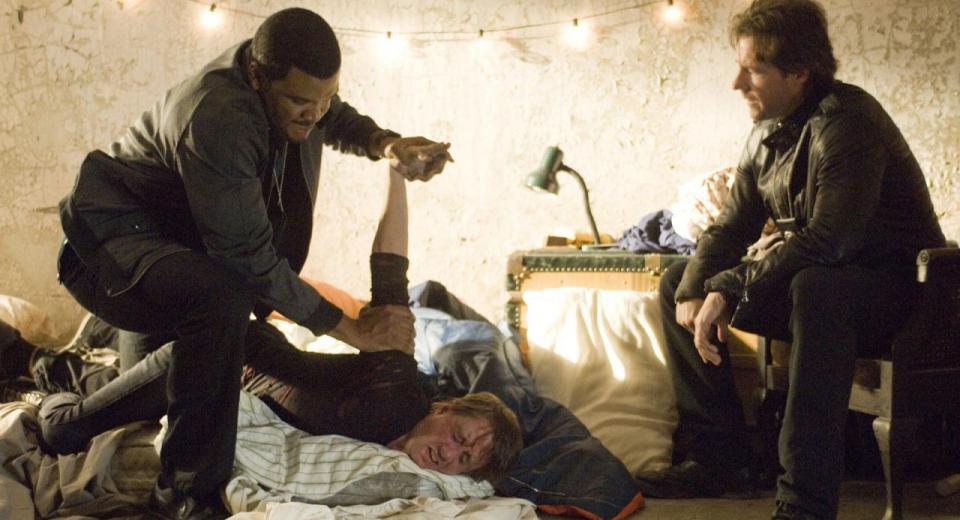 Even if you can easily call into question the quality of the main feature, the presentation (both video and audio) of Alex Cross is near impossible to fault. Coming to UK Region B-locked Blu-ray complete with a 1080p/AVC video presentation in the movie’s original theatrical aspect ratio of 2.4:1 widescreen, the UK release matches up to the earlier US counterpart and provides an impressive, downright reference quality video which happily racks up a perfect-10 score. Whilst there was a time when the point wouldn’t have even been raised, it’s worth also noting that this is another impressive shot-on-film presentation in this new digitally-dominated era (see Django Unchained as well).

Detail is excellent throughout, with stunning close-ups and expertly nuanced longer frames picking up on every little background touch and texture. The broken down backstreets of Detroit positively come to life here, and there’s even palpable 3D-pop to some of the shots. The colour scheme has been intentionally skewed to give us a more stylistic vision, but the tones offered are still well-realised and largely authentic, with some stronger colours, and solid, deep blacks which never impinge upon the shadow detail. With no digital defects worth reporting about and a suitably filmic grain level running across the piece this is demo material even if you’ll likely loathe showing off the film itself to anybody. Similarly the accompanying DTS-HD Master Audio 5.1 track impresses in every respect and provides equally potent demo material which showcases both the subtle atmospherics during the quieter moments of contemplation or investigation, and the intense bombast of the more action-dominated sequences. Glass shatters beneath you, shotguns reign thunder across your living room, helicopters whip around overhead, tube trains screech past, cars roar their way into painful collisions with one another – it’s an energetic offering that creates a wonderful buzz within your own private home cinema, drawing you into the action in a way that the film itself seldom can achieve. Dialogue certainly doesn’t take backstage, however, presented clearly and coherently throughout the piece, largely dominating the frontal array where appropriate. The score is fairly generic, but that only matches up to the piece itself, which is generic as all hell. Still, none of that can stop this from being a reference quality presentation through and through. As with the video and audio, the extras package remains unexpectedly decent and is similarly arguably more than this film deserves.

Director’s Commentary with Rob Cohen runs across the main feature allowing revealing insight into the more technical aspects of the production (shooting on film, incorporating visual effects, and his stylistic choices) as well as the evolution of the script and casting of the feature. He chats about the source material, the character of Cross, the works of Patterson and the controversial casting of Perry in the lead role. Whatever his mistakes in making the film itself, he’s managed to provide those few fans out there with a surprisingly engaging commentary for it.

The Psychologist and the Butcher: Adapting and Filming Alex Cross spends a quarter of an hour further detailing the production with the assistance of numerous interviews snippets from the cast and crew, as well as from author James Patterson himself, who talks about his involvement with the film and impression of it, as well as the larger impact of the Cross legacy.

Nothing worth jumping up and down over, we still get an extra 5 minutes of excised material; four Deleted Scenes, each running a little over a minute in length. Although in fairly rough format (they’ve still got the timecodes on them), and nothing worth incorporating back into the main feature, they’re worth a quick look, particularly the added moment with Cross’s prison contact, which better expands that particularly subplot.

The disc is rounded off by a couple of trailers. The worst tagline ever: Don’t Cross Alex Cross. Yet if you actually decide – probably somewhat foolishly if you’ve read this review – to see this movie, then you’ll realise that the tagline is far from the worst thing about it. Frenetic, vomit-inducing camerawork; paper-thin scripting and non-existent character development; phoned-in supporting performances and a lead casting decision that probably – had it gone the other way – could have saved this entire affair? About the only thing that this reboot gets right is its creepy antagonist, played by a shockingly physically transformed Matthew ‘Lost’ Fox. And whose idea was it to try and make a PG-13 movie about a serial killer who tortures his victims to death? That’s surely only going to displease two audiences. Get rid of Rob Cohen; get rid of Tyler Perry and get Idris Elba – the original first choice for this reboot – instead, and then maybe this character will stand a chance at life beyond the written word.

On Region B-locked UK Blu-ray there are no complaints to be levelled at the perfect video and audio presentation – both demo-worthy and reference standard – nor at the reasonably decent extra features, so I guess the few out there that actually enjoyed this film will actually have something to rave about now. Unfortunately I can’t really recommend anybody else bothers with it. It may not have an unequivocally awful rating, but you’d still have to be pretty committed to give this 100 minutes of your time. And for those fans of the book’s character who have yet to be fully satisfied by a cinematic version of him? Well, keep waiting. After the next film, Double Cross (finding it hard to hold back the laughter), flops, it’ll only be a matter of time before this series gets rebooted again, and maybe third (or technically fifth) time around they’ll finally get it right. I wouldn’t hold your breath though.