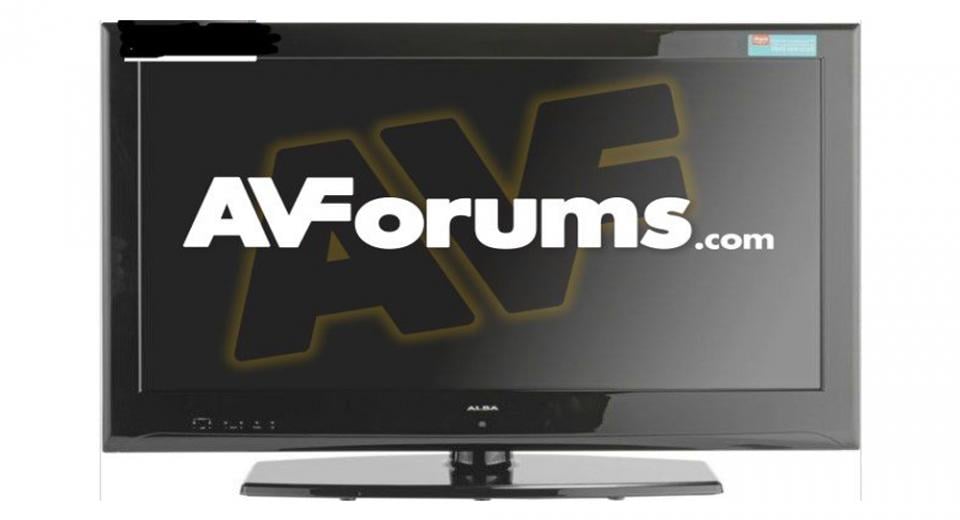 It may surprise some that Argos, who actually own Alba, are the biggest retailer of TVs in the UK market. It may also surprise some that Vestel, the Turkish manufacturer who produce the TVs for Alba, are the third largest manufacturer of televisions, globally. The third surprise might just come in the fact we’re reviewing a 32-inch, no frills TV, at all, but - and we’re full of surprises here – displays of this size are the most popular at retail; not the 46-inch+ TVs that typically provide our review fodder. For a retail price of under £200, you’re probably not expecting much from the Alba LCD32947HD but, as we’ve just demonstrated, life is full of surprises so let’s see if this budget HD Ready LCD is another of them.

One could hardly term the Alba LCD32947HD a looker; it’s gloss black bezel isn’t slender, the chassis – measuring 9cm at its thickest – is hardly svelte and there are absolutely no design frills in evidence. In fact, the stand-out, blue Argos helpline sticker affixed top-right of the bezel is probably indicative of the fact that this TV isn’t aimed at the AV fashionistas out there. All of which is a polite way of saying that, perhaps, the LCD32947HD is aimed at the non tech-savvy segment of the market. The remote control shows a bit of space-age style however, with its unusual slanted ends and we quite like the soft buttons but we do feel the printing on them should have been made more stand-out – target market considered. The LCD32947HD does the bare minimum, connections wise, to earn its HD Ready badge, carrying a single HDMI port along with solitary Scart and Composite video inputs. There’s also a headphone jack, coaxial audio and D SUB PC connections to the rear and a USB port and CAM slot to the side.

Like other Vestel based TVs we’ve seen recently, the Alba LCD32947HD’s menus are comprised of six options - Picture, Sound, Settings, Install and Retune, Channel List and Media Browser. The Picture Settings menu allows you to choose the Picture Mode (Cinema, Natural, Game and Dynamic), as well as set all the usual controls such as Contrast, Brightness, Sharpness and Colour. There is also a Backlight control with four settings - minimum, medium and maximum or auto, a Power Save Mode and a Noise Reduction feature with options for low, medium, high or off. Finally there is an Advanced Settings sub-menu and in here you can select the Colour Temperature (Normal, Warm or Cool). From the advanced settings, one can also select the Picture Zoom (aspect ratio), set HDMI True Black on or off and set the tint control; so there are no advanced calibration controls or film mode options. Not surprising, really. The Alba LCD32947HD doesn’t really have any features, by 2012 standards, other than the ability to playback some media files via its USB socket. File support is extremely limited so don’t go expecting MKV support, or anything exotic, but it will play some basic video file types as well as MP3 music and jpeg photographs. To pad this section out a touch, the Alba LCD32947HD features a child lock, sleep timer and remote control. We’re not being flippant with the last ‘feature’, it’s listed on the box as such.

As the Alba doesn’t feature anything like a calibration suite of controls – not that we think it should – we had to rely on a few minor adjustments to make major improvements; fortunately that is exactly what we managed to achieve. As we can see from the RGB Balance Graph, the three channels are now tracking very close together with Delta Errors all under our target threshold of 3, thanks just to switching to the Cinema picture mode with a Warm Colour Temperature. Gamma tracking is quite acceptable with it nearing an average of 2.2, chosen for a modestly lit room. The default backlight setting of High was still producing pictures that were far too bright but by dropping it to low, we were able to get much closer to our target of 120cd/m2, although it was still a little higher than we’d like at 170cd/m2. Interestingly, we found the Colour control actually raised and dropped the luminance of white so with some careful balancing we managed to get a peak light output around 140cd/m2 as well as reining in the overblown colour palette to far more acceptable levels, with only Blue, Cyan and Yellow showing overall errors above 3. As blue is the least visible of the colours to the human eye, a modest error here is not too perceptible and we were quite happy with the results given the paucity of controls.
The Alba LCD32947HD clearly uses some auto-dimming techniques when presented with a fully black signal, making the On/Off contrast measurement tricky. We were able to fool the TV in to partially portraying its native black capabilities which gave a measurement of 0.122 cd/m2 against a peak light output of 140 cd/m2 to give an On/Off contrast of around 1150:1 but the ANSI measurement was far more indicative of real-world dynamic range performance. Presented with alternating black and white segments in a checkerboard formation, the Alba managed an average black level of 0.24 cd/m2, which is poor by any standard. Sometimes a good filter can mask poor blacks, to some extent, as we saw with the higher end Panasonic LED TVs but this budget entry possesses no such filter and the ANSI contrast of below 730:1 is a fairly true representation of its actual capabilities.

Starting with the good, the Alba LCD32947HD displayed clean scaling of 576i signals and also managed to pass the 2:2 cadence detection tests; meaning standard definition television and DVD’s are handled quite well. Deinterlacing performance was not so clean and the break up of fine lines and details under movement was often apparent. Being a HD ready TV, it’s unlikely many will be hooking up the Alba to a Blu-ray player but those that do will be disappointed by its inability to handle a 1080p24 correctly, which resulted in some frame skipping and artefacting under movement with Blu-ray discs. The Alba also showed some serious chromatic aberrations at higher frequencies so all that colour detail present in High Definition material is not preserved, giving Blu-rays a decidedly low res look at times.

Good news at last for the budget Alba as it became only the second TV to break the 30 millisecond barrier for input lag measured with our dedicated device. At around 29 milliseconds latency, gamers should find the LCD32947HD a pleasingly responsive display.

As the backbone to a high quality image is great contrast performance, or at least the illusion of high dynamic range, it’s inevitable the Alba LCD32947HD is going to be marked quite heavily down from the offset here. Not only were black levels very weak but the Alba was unable to maintain any details in the dark areas when anything else remotely bright was on screen. Shadow detailing was even worse, off-centre, given the weak viewing angles of the panel and the fact that the centre of the screen was a fair bit darker than the sides did nothing to add to the immersion factor. As could be expected from what we presume to be a fairly dated LCD panel, motion resolution was not particularly impressive and we could regularly spot blur and ghosting with faster on-screen action. As mentioned in the video processing section, the inability to handle 1080p24 content properly isn’t going to sell Alba LCD32947HD to movie fans, perhaps looking for a second, smaller display in another room but we’d imagine the vast majority of folks purchasing a TV like this aren’t going to be particularly bothered about Blu-ray.

It’s not all bad though, the standard definition processing was of a reasonable standard with very decent scaling and competent cadence detection, meaning both DVDs and non-HD broadcasts were treated kindly and the impressively accurate greyscale and passable colour reproduction certainly helped here. Unfortunately the deinterlacing performance wasn’t quite so impressive as the scaling, which could lead to break up of fine details in moving objects. We’ll be honest and say we weren’t expecting a great deal, in terms of picture quality, from the Alba LCD32947HD and it didn’t really confound those expectations.

The Alba LCD32947HD ‘boasts’ 2 six watt, downward-firing speakers producing NICAM stereo sound and they are bad, even by flat panel standards. In terms of bass, there really isn’t any worthy of the name and the top end fells almost equally as strangled. Dialogue is audible enough, provided you don’t push the volume slider too high and introduce sibilance but there’s absolutely nothing else good to say. Corners need to be cut somewhere, we guess.

We think it would be fair to say the Alba LCD32947HD isn’t aimed at those seeking style and distinction from their AV kit and it does nothing to pander toward modern tastes for sleek chassis and ultra-thin bezels; in fact it looks 5 years old when put next to some of the design classics available in 2012. No matter, we’re more interested in what happens inside the frame and the remote control is quite nicely styled, if a little difficult to read at times. Connections wise, there’s the bare minimum around the back and the solitary HDMI, Scart and Composite video connections might present challenges for some. Sound quality is also sparse, with almost now low end and a top that distorts very easily, even with the volume slider at a modest position. The menu system is simple, well presented and easily navigable, just like all the other Vestel produced TVs we’ve covered recently.

There are no real features aboard the Alba LCD32947HD, with only some limited playback of media files through USB of any real note. As this TV is certainly not being sold on the back of its feature set, we’d hope that picture quality was something like up to scratch and, following some minor picture adjustments that made some major improvements, the LCD32947HD was looking something like that. Scaling of standard definition signals was quite impressive and the ability to pick up and lock on to the 2:2 film cadence will be a plus to those with large DVD collections. The sub-par deinterlacing does mean that fine lines will break up under movement and the Alba’s inability to properly display Blu-ray discs at 1080p24 means it’s one high-def film lovers should probably avoid. Not that we’d expect the clued-up movie buff to choose a budget 32 inch HD Ready LCD as their display of choice.

The Alba LCD32947HD is aimed at a particular market; one that is less demanding than our typical readership and we need to account for that when summarising. The extremely low price is also a consideration but, ultimately, it does fall short in a number of crucial areas. If you’re after a cheap and responsive gaming display or a TV for a room where image fidelity isn’t crucial, it could make a nice budget choice but, for all other scenarios, it’s not really a display worthy of an AVForums recommendation. Our advice would be to add another £50, or so, to your budget and look for budget entrants from the likes of Samsung, Toshiba or LG.