"He's got the outfit, he's got the elephant, but we're not through yet! Hang on to your turban kid, we're gonna make you a star!" 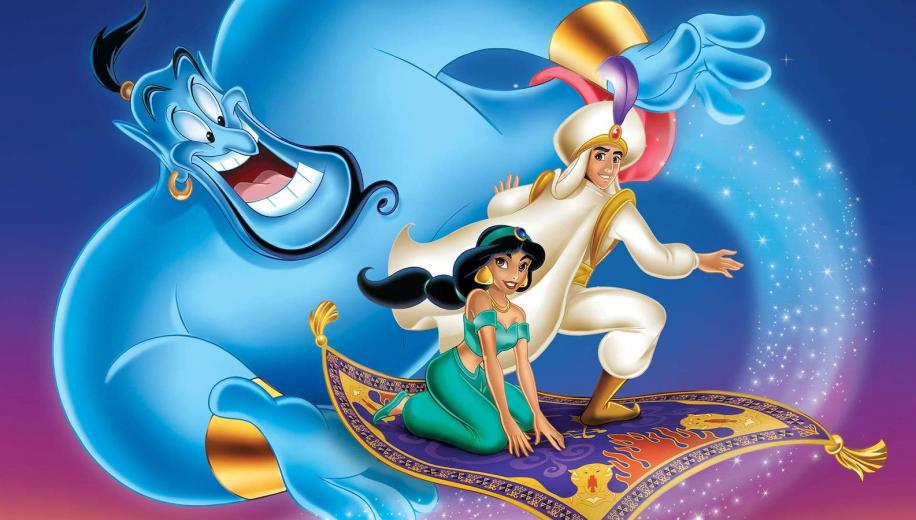 As the 2019 live-action adaptation continues to propel the Disney remake machine - and proves worthy in its own right - 1992's Aladdin still stands up over a quarter of a century later as an all-time classic.

The Disney Renaissance period was only a decade long and included - effectively - a film a year, but of those 10 there was a smaller clutch of all-time classics including, of course, The Lion King, which is often regarded as the leader of this particular pack. A couple of years before that, however, Disney revisited the classic tale from Arabian / One Thousand and One Nights, Aladdin, and struck gold, not just through the magic of their story, setting or animation, nor even their memorable songs - all of which were now synonymous with the Studio - but with their casting.

It's with some bittersweet irony that the late, great, Robin Williams would remain somewhat distant from his role in Aladdin, not least due to the fact that he was paid a pittance for it. Sure he would return for a poor sequel (for the money) but, considering its success largely rested on his shoulders, it clearly proved to be a sore point for him. His genie was, well, genius, making you wonder why he hadn't tried animation before. It allowed him to literally go larger than life, in a way that his figuratively larger than life film and TV roles simply did not have the capacity for. His trademark wit defined the role so definitively that one of the biggest problems with embarking upon a live action remake was ensuring that whoever played the genie didn't merely try to play Robin Williams as the genie (which, to his credit, Will Smith navigates respectfully, tapping into the kind of easy, witty, charming acting he hasn't done in decades).


Disney struck gold, not just through the magic of their story, setting or animation, nor even their memorable songs - all of which were now synonymous with the Studio - but with their casting

Of course, everything else would come together like magic too, with the stunning Arabian setting, magical sorcery, and memorable songs that generations have learnt the lyrics to, but it's Williams that held it all together (perhaps even somewhat evidenced by the fact that the only real discernible difference between the straight-to-DVD style sequels was the mere presence of Williams in the second, ensuring that - if nothing else - it was funny).

So yes, even over a quarter of a century on, this remains Top Tier Disney, and easily one of the best of their Renaissance era films, possibly also marking one of the first times where the memorable casting of a vital role would go on to define the film in a way the ones before and since arguably have not. So, where it would have been Disney's The Lion King and Disney's The Little Mermaid, really this is almost Robin Williams' Aladdin. And all the better for it.

Aladdin's carpet gets a second wind with this 4K Ultra HD Blu-ray matching up to its earlier US release. It's a lovely 4K presentation, revisiting the hand-drawn (but digitally rendered) classic with the same passion and verve that made the Lion King 4K video presentation so exquisite.


It's a lovely 4K presentation, revisiting the hand-drawn (but digitally rendered) classic with the same passion and verve that made the Lion King 4K video presentation so exquisite

Sure, there are inherent limitations with animation, but Aladdin really has had a wonderful makeover, taking the work done for the previous remastered Blu-ray editions and running with it for the 4K upgrade, bringing forth excellent line detail only without any signs of edge enhancement, fine clarity on objects and characters and a wonderfully textured background to cast everything else against.

The change in aspect ratio will either please, be meaningless, or be marginally frustrating, depending on; whether you want a faithful adherence to the original scope, didn't even notice the change from thin horizontal bars to thin vertical bars to frame the image, or find anything that isn't a standard 16x9 image is a pain when projected. Nevertheless, this one affords more information at the top and bottom, not that it makes a huge difference.

More important is the implementation of WCG and HDR to breathe a new lease of life into the timeless classic Disney animation, giving added depth and stunning vibrancy to the myriad tones on offer, from the gorgeous literal Arabian nights, to the skylines, now-lush orange-gold desert landscape, bright and vivid costumes, and eye-popping glow of the genie. The film has never looked this striking.

Aladdin is also gifted an impressive 3D Object-based High Definition immersive audio track in the form of Dolby Atmos. Although not necessarily designed for this kind of treatment, there's plenty of material here to disseminate, and the track has a blast whipping you into a frenzy all anew for an experience beyond what standard tracks have been able to deliver on prior releases.

Beyond the thrilling opening setpiece, some of the best effects come courtesy of the various powers on display, as genie's conjurings sweep over the soundscape. The magical carpet ride whooshes above the kingdom below, and the various busier setpieces with crowds and celebrations enjoy some engulfing atmosphere that puts you in the thick of things. Of course, it's the musical numbers that really ignite the soundstage, with gorgeous vocals given rightful presence, and a rich backing that dominates frontally but expands out across the array. Hell, there's even some nice LFE input to round out an excellent Atmos upgrade.

Aside from the old Commentaries, Outtakes, Featurettes and Songs, there's a new Interview, some voice recording sessions and 2 alternate endings, but only on the Blu-ray

Aladdin remains one of the best of the Renaissance era Disney films from the 90s, perhaps bested only by The Lion King. Its live action remake is surprisingly good, but also gives fans old and new an added reason to revisit the classic original.

The UK 4K Ultra HD Blu-ray release of Aladdin earns itself excellent 4K video and impressive Dolby Atmos audio, as well as a few nice new extras. It comes recommended - pick both old and new versions up and decide yourself which one you prefer.