Sure, he may not top Robin Williams, but this is the breeziest and most charming Will Smith has been in years. 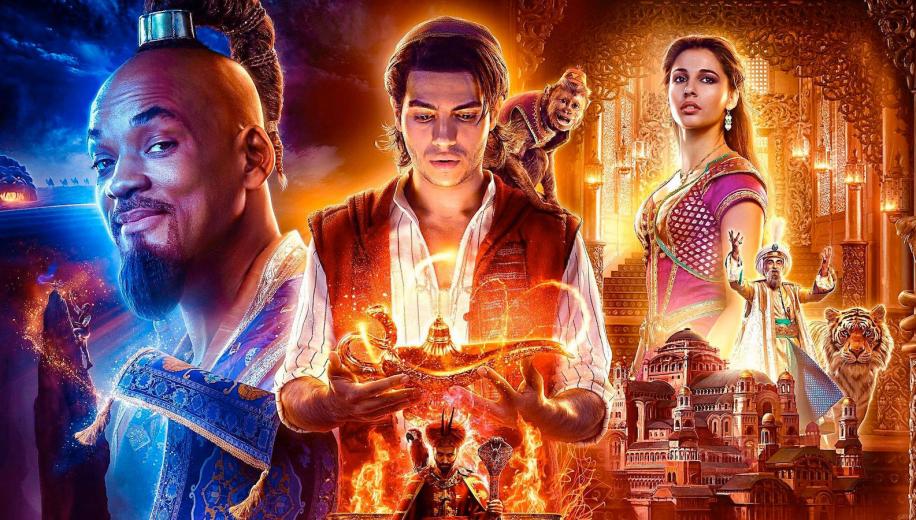 As Disney continues to plough through its back catalogue with live-action adaptations - this year alone giving us The Lion King, Dumbo and Aladdin - it hits veritable gold with this magical interpretation of the timeless One Thousand and One Nights tale, dressing it up in lavish new trappings, and boasting some awesome visuals, but thankfully not forgetting to intersperse its memorable musical moments and stunning setpieces with some pretty decent characters, committed performances, and a faithful but effective adherence to the core story.

Key to making this version work is a desire to do justice to the story rather than merely top the classic animation, with everybody involved happy to do their parts to be decent in their own right, rather than compete with the likes of Robin Williams who - after all - simply defined the original Aladdin. Here, as dodgy as the preview shots might have looked, and as bad as the press reports surrounding them were, Will Smith is on great form - perhaps the best and most comfortable he has been in years - happy to deliver his own take on the Genie, embrace the CG enhancements, go larger than life where required, commit to the songs, and even weave in a little charming romantic angle of his own, all the while working his own magic in the role, something that perhaps hasn't been seen from Smith in a while (and which, strangely, gives hope that Bad Boys for Life won't be a complete disaster, but instead a further return to form).

But it's not just Will Smith (although, much like Williams, he's the linchpin), the whole cast is well-chosen. Mena Massoud's Aladdin grows on you, Legion's Navid Negahban makes for a decent Sultan, Marwan Kenzari goes full panto for his suitably despicable villain Jafar, and Naomi Scott? Well, she's just enchanting as Princess Jasmine, afforded some suitably 2019 empowerment, but still every bit as stunning, vulnerable, cute, and defiant as the character should be. Looking like a Buffy-era Sarah Michelle Gellar, Scott also reminds of the perfect combination of strength and vulnerability that makes both that role and this memorable. Between her and Smith, the film really couldn't go wrong.

Adherence to the musical numbers is also a nice touch (after Dumbo), and makes for some great new magical interpretations of the classics (as well as a wonderful Frozen moment for Scott's Jasmine, getting her own heartfelt solo), complete with truly epic visual setpieces to accompany them. And Ritchie does well to play this one straight, giving it style, but not his style (again, compare with the very Tim Burton Dumbo), and affording Disney yet another winner.

Aladdin (2019) rides its magic carpet to UK shores with a 4K Ultra HD Blu-ray matching up to the earlier US release. It's a gorgeous 4K presentation, belying the ostensibly limitations of its 2K Digital Intermediate, revelling in the stunning landscape and magically wondrous setpieces.


A gorgeous 4K presentation, revelling in the stunning landscape and wondrous setpieces

Detail is expectedly great throughout, picking up on finer textures (perhaps a little bit too much on Smith's occasionally odd blue CG Hulk-suit) and revelling in the trappings of this magical desert city and palace setting. There are so many stunning shots of the landscapes, the jaw-dropping palace itself (whose exterior is colour-designed right down to the last pot and sash of clothing draped at a stall) and the lavish interiors, all of which are utterly reference. For a big budget production, the CG curiously isn't perfect, and there are a couple of instances which drop the picture-perfection marginally, but it really doesn't bring down the whole at all.

Of course, this film is really all about the popping colours, and here's where the WCG and HDR go into absolute overdrive, bringing the procession to life like you couldn't imagine, replete with wondrous tones to costumes and effects, whilst the magical moments - mostly revolving around the Genie - get plenty of pizazz too, with cool neon blue electric energy to his magic, whilst eye-searing lava explodes onto the screen during the opening setpiece and returns to the fore when Jafar starts to weave his own sorcery. Black levels remain rich and suitably inky, rounding out a gorgeous demo presentation.

Aladdin (2019) is afforded a 3D Object-based High Definition immersive audio track in the form of an equally  demo Dolby Atmos mix. Making the absolute most of a cadre of foot-tapping musical numbers, as well as some grand scale effects, it's an engulfing, thoroughly engaging ride. Sure, it's a notch below the norm in terms of volume level mastering, but you don't even notice the number on your dial once you're in the thick of things, and it certainly can't be faulted for weight or presence.

Much like the video, the tremendous audio track gets off to a great start with its lamp retrieval Indiana Jones moment, bringing the walls in on you and providing a great score to keep the tensions high during the setpiece. And it only gets better, enjoying every one of the memorable classic musical numbers, seemingly each with increasing scale and ambition, coupling the singing and music with a whole bevvy of fireworks and explosive effects, and bringing unexpected bombast to the party, and more than a little LFE weight. The magical carpet ride is an absolute joy, but more intense is the carpet chase through the streets, and the closing sorcery-infused battle threatens to decimate your living room. Great work.

A few Featurettes, a Deleted Song, and some Deleted Scenes, Bloopers and Music Videos, but only on the accompanying Blu-ray disc

Aladdin is a strong contender for the best Disney live action classic adaptation of 2019, and one of the best of any that they have embarked upon so far. Whilst there are plenty more to come, it's one of the few where a sequel would be in order.

The UK 4K Ultra HD Blu-ray release of Aladdin (2019) earns itself stunning 4K video and Dolby Atmos audio, as well as a few nice extras. It comes recommended, whether you want to complete your Disney collection, or just fancy a thoroughly enjoyable Arabian adventure.