The least expensive model in the test tries to bridge the gap between home and mobile use. 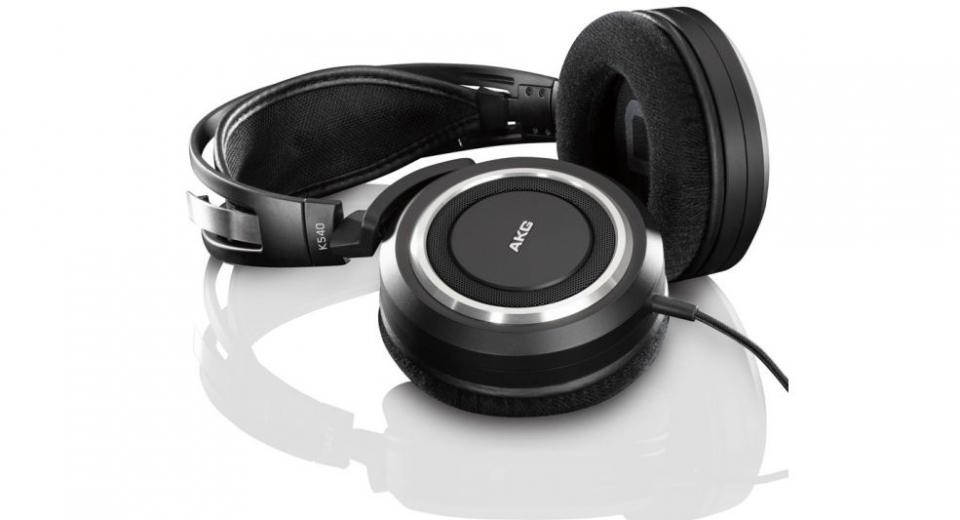 The first of no less than three pairs of German headphones in the test, the AKG heads up the group both alphabetically and as the least expensive models here. AKG is part of the Harman group of audio companies and has a considerable heritage in both professional and domestic audio. The domestic range is extensive and includes both in ear and over ear designs. The K540 sits towards the lower end of this range which extends to products in the high hundreds of pounds.

The K540 is listed by AKG as a “Multi Purpose” design and fits between the entirely portable types and the larger and less mobile home hifi models. The result is a well proportioned design with semi open cups that swivel through ninety degrees to fold flat, reducing the amount of space that the K540 takes up when not in use. It is not a collapsible design though as there is no hinge above the earpad that would allow the K540 to fold into a smaller space.

Some of the other design features are more in keeping with domestic headphones though. The cord is two metres long and has no inline remote for controlling an iPad or iPhone. An adaptor for the larger quarter inch jack is also supplied for use with full size headphone sockets. The result is almost the best of both worlds. The chord is a little long on the move- it generally needs to be looped up with a wire tie- while at home the pads aren’t quite as comfortable as the two models with full size ones. Nevertheless, the K540 makes a good stab at being equally happy being used on the move as they are at home.

The fit and finish is good too. The hinges and moveable sections feel substantial and well thought out and the plastics used are of a high quality. The chord is sturdy and covered in a jacket that feels like it will stand up to some considerable abuse. One welcome touch is that the material pads are washable and can be exchanged- there is no need to have your headphones cultivate new life forms unless you want them too. A slightly curious feature is that the L and R symbols are only shown on the inside of the earpad which makes picking them up the right way around at a glance is trickier than you might expect.

As previously mentioned, the AKG is not the absolute winner in comfort but it is still pleasant to wear for long periods of time. The “traction” they place on the ear is sufficient to keep them in place on the move without leading to feelings of hot or squashed ears. The range of size adjustments is enough to accommodate most human heads and the all up weight of 230g means it doesn’t feel too heavy. As a semi open design, there isn’t a huge amount of sound leakage to the outside world and neither to they allow a huge amount back in. Listening in a public space at sensible volume levels is unlikely to annoy those around you too much.

AKG has a strong background in professional audio and in some respects this shows through in the performance of the K540. This is a very neutral performer with a usefully flat frequency response from top to bottom. Compared to some other models in the test, the K540 can lack a certain excitement but the longer you listen to them, the more appealing the sound. Depending on the equipment you connecting them to, it would be possible to EQ your source to tune the sound more to your liking and very neutral performance of the K540 would make an excellent starting point for this approach.

The other standout characteristic of the AKG is the bass. This is not overblown but has a lovely detail that greatly aids the sense of realism. Where some of the other designs will give a slightly monotonal “thud”, the K540 finds the slightly different textures and nuances that make a performance sound much more convincing. When you listen to a piece that has genuinely deep bass, the AKG has no problem reproducing it with conviction. Voices and instruments also sound convincing and interestingly, my wife felt that they were the best of the bunch for hearing exactly what Ableton and Kontackt were up to which is probably another nod to their professional heritage.

A likeable trait of the AKG is that it is extremely forgiving of compressed material- which given that they have one eye on portable use- where MP3’s and other similar formats predominate- is ideal. Increasing the quality of the files, brings improvements although I felt that there were some other designs here that managed to reveal a little bit more from high resolution files. Equally, using an external headphone amplifier brings some slight improvements but they are giving most of their performance up when connected to an iPhone or laptop which is logical enough.

In terms of sensitivity, the K540 is about the group average. They will generate volume levels that should be enough for all but the most ballistic of listening from an iPhone or iPad and were well within the capabilities of the laptops to drive as well. The slightly less powerful headphone amp in the iPod classic might not achieve quite such high levels but the AKG is a good bet for most portable devices.

Given that the AKG is the least expensive model in the test, it is an impressive design. It is capable of a very neutral and detailed performance and makes a genuine stab at working equally well at home or out and about. If £100 is your upper budget (and a quick glance at the web suggests that the K540 is available for a bit less if you shop around), these headphones should prove to be versatile and engaging performers that go most of the way to achieving their design brief.