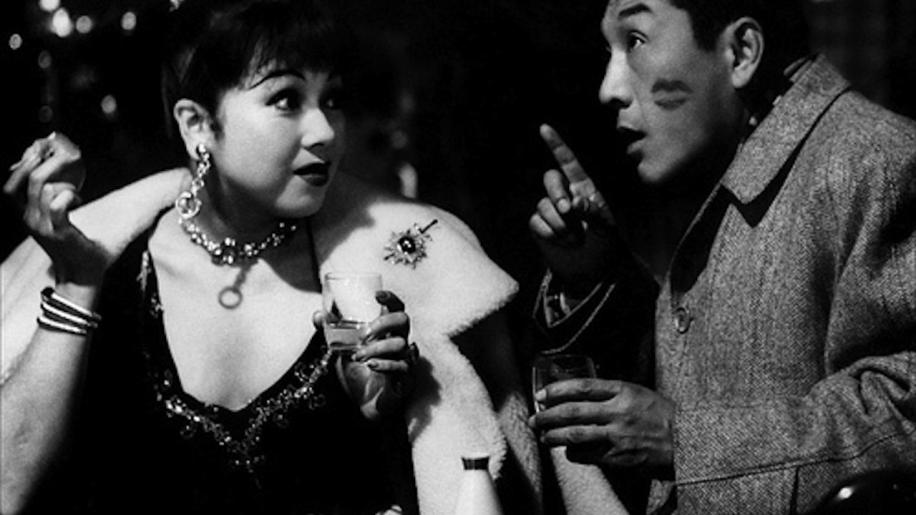 Both films are presented in their original 1.33:1 full frame images.

Yokihi, in Eastman Colour, looks worn and muted, with the primaries decidedly dull, but stable. The problems with such a vintage print, even having been restored, are immediately apparent - with numerous scratches, nicks, tears and pops adorning the image. Thankfully, the print is largely wobble-free and the old bugbear of scene transitions struggling is not evident here. Mizoguchi likes to fade to black for an extended second or two at such points, like the closing of a chapter as expert Tony Rayns likes to put it, so don't be concerned about such things when they occur. There is a problem with the contrast though, which is high and a little irritating. It also wavers. But there is no problematic edge enhancement and no excessive noise to contend with. The image is soft throughout, yet close-up detail is still surprisingly good.

Akasen Chitai, a slightly newer film, looks far better. Its black and white image is, for the most part, very clean and clear. The print is much more stable and exhibits far less damage than its counterpart. Contrast is good, though not great, but keeps its distinctions accurate and doesn't fluctuate. Detail is good on the distance shots as well as the close-ups, meaning that the street scenes and those outside the factory gates on the outskirts of the city have reasonable depth and clarity to them. Interiors have that kind of diffused lighting that makes shadows turn more grey than black, but they still look fine considering the age of the print. As with Yokihi, grain and noise, edge enhancement and artefacts have been largely eliminated, but Akasen Chitai does look agreeably sharper and more detailed. Whilst Yokihi sounds more brittle and suffers from slight distortion and drop-out, Akashen Chitai comes across as reasonably clean and clear of too much age-related damage. There is some underlying hiss - very slight - and voices come across as a little muted, but both mono transfers are generally quite good. I certainly didn't have a problem with either film's audio. You obviously can't expect anything approaching separation and the mixes are defiantly introverted, but these aren't films that rely on intricate designs. Predominantly talky, they keep on an even keel and Mizoguchi never attempts anything aurally tricky. The weird electronica in Akasen Chitai comes over well, but the score for Yokihi does warble with too much brightness.

Still, both films come over well considering their age, and shouldn't disappoint. Once again, Eureka furnishes their release with some standard extras. The now-ubiquitous Tony Rayns provides more enthusiastic background trivia to both films and, in the case of Akasen Chitai , even lends his tonsils to a full-length commentary track.

Yokihi gets a 9-minute introduction from Rayns, who is quite honest about the film's failings but delivers an interesting account of its troubled production and the legacy it gave the world in the formation of the Shaw Brothers Studio. For the first time in Rayns' series of intros, this is actually filmed in colour in a celebration of Myzoguchi's use of it in the movie ... which is quaint.

Akasen Chitai gets an 11-minute introduction that is very informative and detailed and provides an excellent starter for the issues confronted in the film. But, then again, a lot of this is also regurgitated in Rayns' excellent commentary track. Scene-specific, motor-mouth Rayns shovels-in loads of fact and detail on the story, the shoot, the characters and the performers and, like the awesome Sir Christopher Frayling in his wonderful chat-tracks, supplies plenty of opinion and interpretation which I always find fascinating. Films are highly open to personal interpretation but so many cast and crew members, when given the opportunity to discuss a movie, simply toe the party line and deliver nothing that is either remarkable or revelatory. Film authorities and historians, however dry some of them may be, at least tend to give insight and sincere thoughts on what works, what doesn't and, more importantly, why certain things are so and have the benefit of being removed from the production and therefore able to say things that those involved with the project might shy away from. Rayns gives an interesting piece on the unusual music for the film and supplies oodles of what would have been revelatory backstory to Mizoguchi's personal life and affectation with prostitutes. Listen out for the somewhat bizarre reference he makes to the curvy Machiko Kyô - “She's in pretty good shape for a 32-year old”!!!! She was only thirty-two, Tony - she should be in good shape! I do agree with him, though.

The full release version also includes a 64-page book of essays and writings that was not available for review with these check discs. But, going by the standards of those that have gone before, I'm sure that it will be rewarding, detailed and very informative and illustrated with some great images from either film. As usual Eureka brings some gems into circulation and presents them in restored prints that, by all accounts, look better than any previously made available. But one of these gems, ironically the more colourful and dazzling one, is revealed to be a bit of hollow exercise in style, rather than one of Mizoguchi's typically lyrical and hypnotic dramas. Fans should not mind though, there is still plenty of interest and appeal in his Hong Kong collaboration. The star of the set is, of course, Akasen Chitai, which is textured, delicate and probing all at once. The performances are captivating and the approach one of measured wit, insight and, in a departure for the director, quite unflinching and frank in its depiction of a brothel's desperate brokerage of suffocated dreams. The AV quality is about the best we could expect and is only hampered by the unavoidable vintage of the films themselves. The extras, from what I've seen (sans accompanying book) are slight but informative. Kudos for the commentary, though, which is great - Tony Rayns even gives Bey Logan a run for his money in the rapid-fire, never-come-up-for-air department. Well recommended all round. Yokihi is an intriguing glitch, but Akasen Chitai is the real deal.