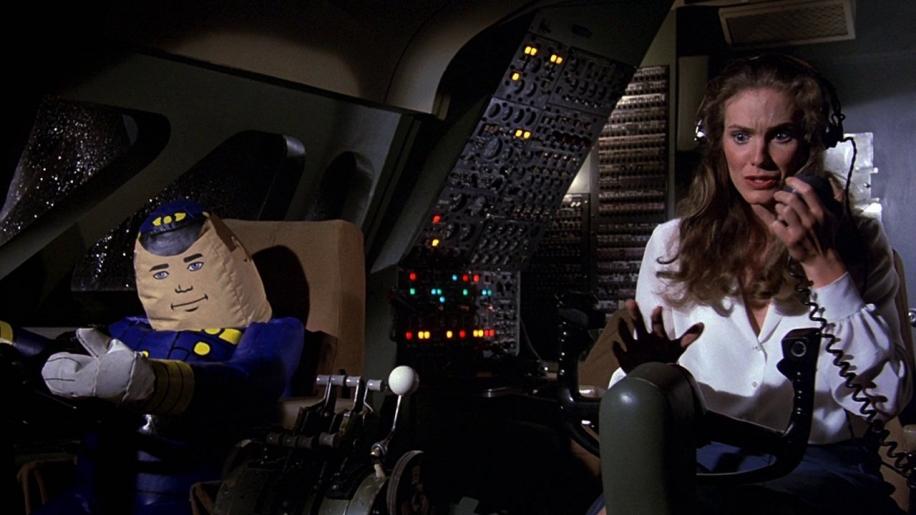 Think of every airline disaster movie you’ve ever seen, then every corny scene to have come from that genre. Now take the mick out of it all – big time! This seemed to be the modus operandi of Jim Abrahams, David Zucker and Jerry Zucker – creators of ‘Airplane’ which is now considered to be “One of the Top Ten funniest movies ever made!” by the American Film Institute. It wasn’t just the American folks who found it funny when it was released back in 1980, it was like a breath of fresh air in film comedy for the UK Cinemas too. It was also one of only two films to have packed out the Alloa Town Hall for a weekend, when I used to show films back in Scotland. I remember vividly the guffaws that rocked the old building and also an overheard remark after the screening.

Young boy: That was really funny

It’s not very often that you hear a film getting a round of applause as the end titles roll but this is one movie that did. Now ‘Airplane’ swoops on to UK Region free Blu-ray, giving us the chance to revisit many of the jokes that made us laugh in the past.

Dr Rumack: Can you fly this plane, and land it?

Dr Rumack: I am serious... and don't call me Shirley.

It’s the film that jump started the career of actor Leslie Nielsen and led to him starring as Lieutenant Frank Drebin in the ‘Naked Gun’ series of movies as well as the ‘Police Squad’ TV series. Prior to ‘Airplane’ he’d been known for playing serious roles as had fellow cast members Robert Stack, Lloyd Bridges and Peter Graves. But nowadays, hardly anyone remembers that Nielsen played the ship’s captain in the original ‘The Poseidon Adventure’. Thanks to ‘Airplane’, it’s also very hard to watch any of the ‘Airport’ series of disaster movies when they are screened on TV and take them seriously.

You want to hear the storyline? Okay, but the gags are the reason for watching this movie. Former World War II pilot, Ted Striker (Robert Hays) wants to save his relationship with airline stewardess Elaine Dickinson (Julie Hagerty) so follows her on board her flight. On the airliner there are many stereotypical characters as well as Captain Oveur (Peter Graves), the pilot who likes to place his hand on the shoulder of young boys and enquire if they’ve seen any movies involving gladiators. Everyone who eats fish on the plane, including the flight crew, is diagnosed as having contracted food poisoning by Dr Rumack (Leslie Nielsen).

Dr Rumack: You'd better tell the Captain we've got to land as soon as we can. This woman has to be gotten to a hospital.

Elaine Dickinson: A hospital? What is it?

Dr Rumack: It's a big building with patients, but that's not important right now.

As you’d expect, Ted Striker is the only man on board who can land the plane by being talked down by his former commanding officer, played by Robert Stack.

Ted Striker: No, I've been nervous lots of times.

So, that’s the set up for every sight gag and one liner you can think of linked to airborne disaster movies and many others including ‘From Here to Eternity’, ‘Saturday Night Fever’ and ‘Jaws’. What makes it all work is the straight faced delivery of the lines by the cast and the sudden cuts to hilarious visuals such as when the Airport Control Tower crew member says “They’re on instruments,” it’s followed by the aircrew playing like a jazz quartet in the cockpit. Things take on a surreal quality when Nielsen as the Doctor lies to the passengers and his nose grows. Probably the funniest of all for me is the scene where a female crew member borrows a guitar to sing to an ill little girl on a drip. Mid chorus, her swinging guitar dislodges the drip connection and nobody notices as the little girl tries to attract their attention.

Young Boy with coffee: Excuse me, I happened to be passing, and I thought you might like some coffee.

Little Girl: No, thank you. I take it black - like my men.

The creative team behind the film were also responsible for ‘Kentucky Fried Movie’ as well as other spoofs such as ‘Top Secret’ and the ‘Naked Gun’ series – but they go to great lengths to deny any connection with the sequel to ‘Airplane’, which the studio had been desperate for them to make.

Watching ‘Airplane’ today, the jokes obviously don’t have the same freshness as they have been copied and done to death since the movie’s success but it’s hard not to laugh as they are still genuinely funny. Perhaps they won’t get the same belly laughs as they did on first viewing, but they certainly still made my shoulders shake.

For anyone who hasn’t seen it yet, it’s quite a treat – but you can’t beat watching it with a large audience. Whatever you do, don’t eject the disc as the end titles start to roll because there are a few amusing credits that will make you smile. There’s also one last gag right after them to round off the movie.