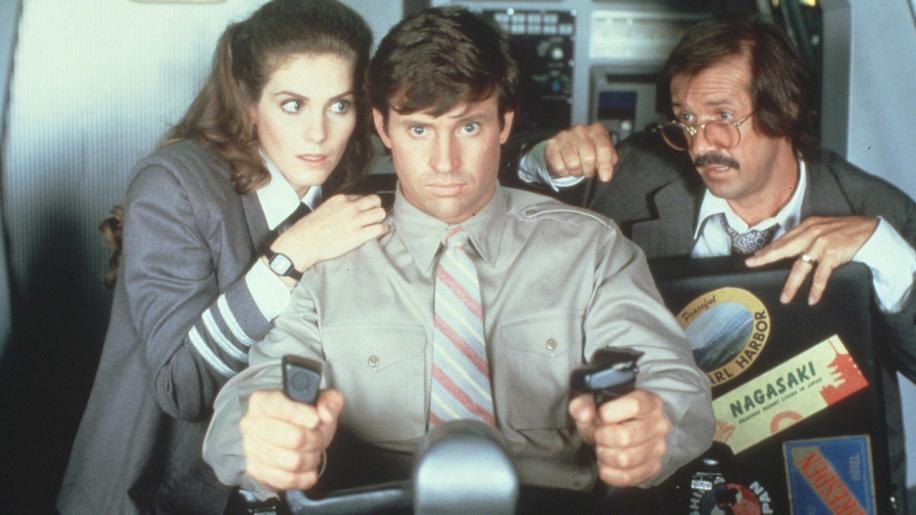 A truly successful film parody will never allow one to watch a serious film again. Visions of its spoof will always come to mind and wipe out any and all attempts at drama. For whilst a film parody is an attack on a specific film or genre, to become truly great, a spoof must also treat its source material with respect and in some cases affection. The film parody has always been with us, since the very beginning, Mack Sennett, the father of the American comedy was spoofing D.W. Griffith films before 1920 way back in the silent era. Perhaps the most well known spoof writer is Mel Brooks that had dizzying success with Blazing Saddles (1974) and young Frankenstein (1974) which took a long hard look at the western and horror film respectively. But it took the combined talents of Messer's Zucker, Zucker and Abrahams, three comedy writer/performers from the University of Wisconsin, to really hit the big time with parody, forever changing the format and stopping the disaster movie dead in its tracks. Flush from the relative success of the Kentucky Fried Movie (1978) which contained a pretty good parody of Kung Fu films within it, the trio developed an idea they had on aeroplane disaster movies that proliferated in the seventies. Its actual source material was Zero Hour a fifties B-movie that is now unwatchable, so good was the parody. The film was of course Airplane! In its wake the spoof was reinvented and a slew of new parodies were commissioned, including the inevitable sequel and the rest, so they say, is history. Paramount have placed these two comedies together in one neat 'collectors edition', however I must stress that the only difference between this and the single disc versions already available is the cardboard slip case to keep the discs together.

Airplane!Amazing as it now seems Airplane was a sleeper hit in 1980. Its plot revolves around the cabin crew of an air passenger liner becoming ill and it is up to the stewardess and war ravaged pilot to save the day. However this takes second place to, and is merely a devise to get to the gags. There is never an opportunity lost to place a gag on film. Visual gags, puns, slapstick, wit; all are given full reign. Primarily it is the aeroplane disaster film being parodied, but it is never limited by its own constraints; Jaws, Saturday Night Fever and From Here to Eternity all have their place within the spoof. Nearly every line of dialogue becomes immediately quotable, have become instant classics and often imitated. But it is with the respect given to the material by both the writers and performers that makes film what it is. Yes the comedy is obvious and daft, but it is never crass or insulting. It is written with a razor sharp wit and delivered with sincerity, that is why the comedy is so good. The casting too has a great deal to do with the success. In fact Leslie Neilson had a second career on the back of this film, becoming like a parody himself, try watching him in a serious role, it can't be done! The film launched the careers of its writer/directors the brothers Zucker and Jim Abrahams and deservedly so. Not only is the film sited as one of the best parody film of all time, but frequently tops best comedy film charts too. It is relentless in firing jokes at the audience; even if you think you've seen it all, along comes another gag winning you over, you can't help but laugh. And laugh you will for Airplane truly deserves all the praise and numerous awards heaped upon it. Surely I can't be serious. I am serious, and don't call me Surely.

Inevitably the success of Airplane paved the way for a sequel. It took two years and the loss of the Zucker brothers and Abrahams to be replaced by Ken Finkleman, to bring it to the screen. The budget and scope of the film were bigger, instead of an air passenger flight there was a passenger shuttle flight to the moon. The film managed to reunite many of the principle and incidental cast of the original giving a very natural sequel feel. However it also recycled many of the original jokes and ideas giving rise to a film that is almost identical in plot and style. If trying to ally audience fears the film is quick to point out its own similarities (“We've been in this exact same predicament before”) but it never really pulls it off. There is simply too much the same. The original revels in its cheapness the sequel has to make do with looking cheap by producing naff effects, it's not the same. Where it does score points is in its casting appearances. The original reinvented Lloyd Bridges, Peter Graves and Robert Stack, the sequel chose to cameo the likes of Bill Shatner, Sonny Bono and Raymond Burr. However, even though the jokes come as quick and in equal numbers as the original and even with its rocket like pace, Airplane II is very much the sequel, inferior in originality and quality. All this conspires to reduce how funny the film its, oh it has its moments of genuine hilarity, but they are spread far to thin to really make a difference.

Airplane is the quintessential movie spoof and joins the ranks of the comedy greats. Its irreverent but none stop humour never fails to amuse even after many viewings. In fact so good is it that it can happily carry its lacklustre sequel without fear of reprisal. It spawned a wider genre, reinvented and launched careers and above all else is undeniably funny. It is quite deserving of a 'collectors edition', unfortunately this is not it. 'Collectors' in the sense of this set refers to 2 discs together, rather than anything special. However, as already surmised Airplane is too good to be saddled with anything but a deserving score. Sit back and enjoy because I wonder if we will ever see its like again.