Tactical role-playing at its worst 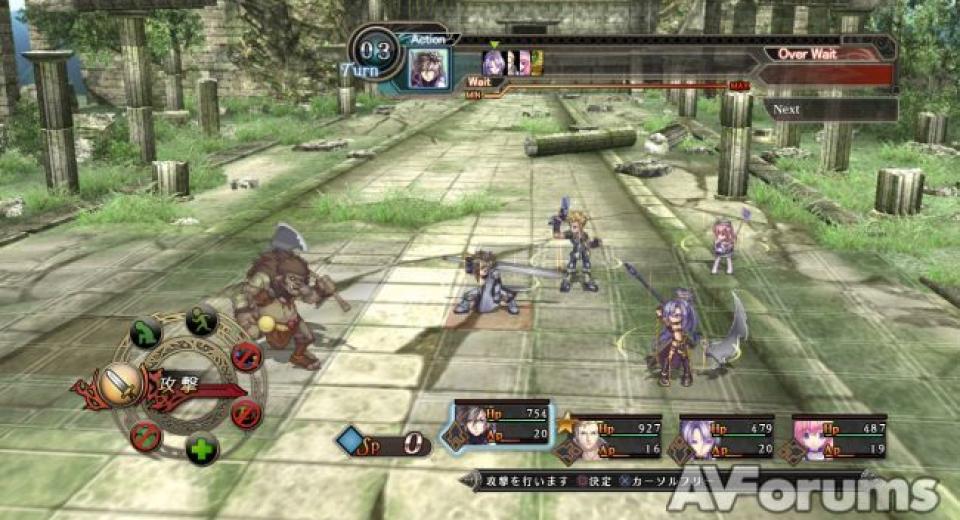 So if you’re afraid of the JRPG genre or you’ve never come across the ‘delights’ offered up by risque anime before, you might want to steer yourself away from the Agarest series. Idea Factory's franchise offers up some interesting dynamic tactical RPG action and the allotted amount of fairly disturbing female pseudo-nudity to keep fans happy, but the series is couched in so many overwrought story beats and hung on so many poorly-implemented mechanics that it’s almost impossible to recommend.

Delving in, the introductory cutscene tells the tale of a warrior named Weiss. Taking a lead straight out of the Kratos playbook, Weiss decides to rather callously slay a god and is quickly dispatched back down to earth with his memory erased as punishment. Leaning into the anime tropes almost immediately, Weiss is soon joined by a young (uncomfortably so) medic and a mysterious buxom female warrior with little in the way of clothing, with the trio aiming themselves at the nearest town to recuperate and get ready for a long journey of discovery.

After saving their collective asses, that mysterious woman eventually (and grumpily) explains that her name is Eva and that Weiss has a heck of a lot of atoning to do for his grave mistake; the most major task of which is finding the missing pieces of a heavenly power and becoming a new ‘vessel’ for the next generation. This being an Agarest game of course, he’s also made aware that he must choose a new mate along the way, so that his accumulated power can be transferred to another when he eventually passes from this realm. Kinda like Groundhog Day then, but terrible.

Still with me? OK. The plot, for as interesting (perhaps) as it could have been in the right hands, is hampered by the usual god-awful clunky dialogue and ridiculous melodrama that comes along with the genre. Don’t get me wrong, I’m certainly not averse to watching anime and I have no problem with bad translations or terrible writing in these types of games if they’re serviced by gameplay mechanics that overcompensate, but in the case of Agarest, I’m not sure whether the actual act of playing is better or worse that those interminable story sequences. From the beginning then, this is a tactical RPG that shows its clunky and dated engine for exactly what it is. The pseudo-2D sprites overlayed on the 3D arena backgrounds look budget in the worst possible way, and almost every visual has a rough edge and lack of polish that you’d think would be a thing of the past for any major PS3 release in 2012. There’s no cohesion between the two seperate visual elements, with protagonists existing on their own plane and the rest of the environment twirling underneath as the camera pans around during the team-up special attacks. It almost reminded me of Mode 7 on the SNES at times, except without the rose-tinted nostalgia that system generates.

Compounding those issues, the framerate during battle sequences will often dip to the extent of a slideshow, and the whole thing has a style that reeks of fan art rather than actual direction. I actually paused and eventually restarted my PlayStation 3 after the very first encounter, convinced that something had gone awry with the install or that it hadn’t launched properly. After testing on a spare system however, it was apparent that choppiness is simply inherent to the game. Maybe I’m spoilt by a recent resurgence in smooth-framerate PC gaming or maybe I’m being overly harsh for those that know what to expect, but the lack of technical polish was off-putting in a manner that cast the whole experience in a negative light.

Even with those impressions firmly in place however, Agarest could still have been saved if the tactical action was compelling enough to make you want to continue. Unfortunately, although there’s nothing glaringly bad about the battle system, it’s hardly enough to make up for the litany of glitches.

This version of the Idea Factory RPG template is essentially an action-tactical hybrid, with individual members in your party of four taking a turn as and when their slot comes up on a timeline. You pick your band of mistanthropes from a roster of characters brought into the story along the way, gradually giving them specialities and arranging them on the battle grid to best suit their chosen roles. Skills and unlocks are rewarded essentially through grinding attacks, so you’ll be performing the same moves with the same people over and over again, in conjunction with attacks from other characters where necessary. Leaving aside the broad strokes of that system, the actual functional aspects of attacking your opponents are where things get a little more interesting. Each character has different attack options (melee, ranged, magic, etc) mapped to the face buttons, and an action bar to exhaust as you see fit. You can swap in and out of combo attacks, so you might want to knock an enemy down with one character, then use a heavy ground-smashing attack of another until their turn is over. Characters then jump around the timeline according to whomever you used. Wait too long and you’ll see the timeline compress a little; over-damage your opponents on a kill and you’ll unlock yourself a nice bonus.

That’s not a bad system in and of itself, but there’s a distinct lack of feedback and satisfying response that really curtails any potential impact it could have had. The special attacks and group combo attacks mapped to the shoulder buttons are where things should really have gotten interesting, but when compared with the best the genre has to offer, the resultant pyrotechnics when unleashing one of those devastating combos is well short of the sensory release that you’d hope for.

Agarest doesn’t actually play too badly on a functional level then, but the combat is eventually dull and repetitive, with layers of fairly obtuse mechanics diluting the appeal of simply cracking open enemy skulls in an Action-RPG fashion. The other significant areas of the series - namely the titillation and bouncy anime fan-service for which many will purchase the game exclusively - are definitely in full force, and about as attractive or weird as you might imagine - delete one word as appropriate.

Playing into those ‘features’, the dating aspects of Agarest are about as silly as you might expect, but rendered largely impotent thanks to the boresome dialogue. There are plenty of stereotypically vixen-like women and ‘cute’ girls to turn your attention to, and the mini-games are as ridiculous as you might expect - massaging oil into your companions or fanning steam onto them as they bathe, as an example. Choosing your partner and reaching the end of the cycle eventually dumps you back to the start of the quest again to play as the offspring of your forebear, and you’ll rinse and repeat that process until you reach the final tier of your powerful dynasty and polish off the story.

If it’s just the risque elements of the JRPG genre that you’re interested in, Agarest: Generations of War 2 might have you covered in some respect - even if it doesn’t offer the same courtesy to its protagonists. If you’re interested in a decent role-playing game, Action-RPG or Tactical Battle game however, please save your money and look elsewhere. Agarest: Generations of War 2 isn’t a good game, and doesn't even reach that ever-increasing bracket of mediocre titles with a few saving graces that might sway opinion. It’s fan service through and through, and let’s face it, if you are one of those fans, you’ll already have the special edition on your shelf and you won’t be reading this. For everybody else, please think twice.