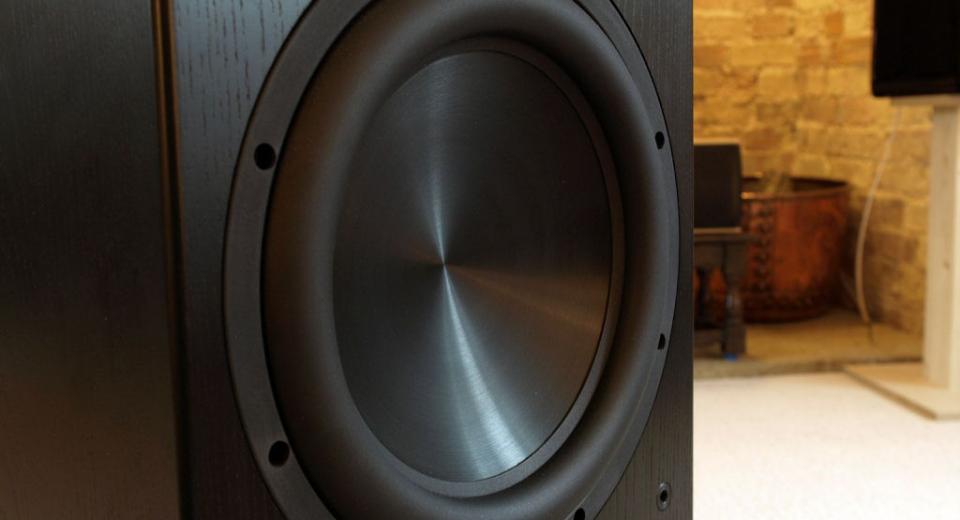 When the offer of the £3790 Aerial Acoustics SW12 came up, it took a period considerably shorter than my room's reverberation time for me to accept. The packaging weighing in at 73kg, not only includes the 59Kg of the subwoofer, but the cardboard carton is also lined with MDF safety boards and 50mm of expanded polystyrene. This is one well protected package and takes more than one man to lift.

Within the top of the box are the ancillary items including the remote control which is no run of the mill OEM job. Machined from solid aluminium, it operates virtually every user controllable parameter on the sub along with a built-in torch. Nice touch. It should not be dropped - not because you could damage it - but because it will damage whatever breaks it's fall.

Once extracted, the SW12 seems quite demure at 635 x 356 x 584mm, although it still sits squarely in the bracket of large subwoofers. In place of the standard issue spikes, there is an optional 24Kg sand filled base available, which was neither supplied nor required as I'm lucky enough to have mass concrete floors. The 25mm thick MDF cabinet has a 50mm front baffle and is extensively internally braced and unlike any number of products that claim furniture grade finish, the SW12 delivers it under close up scrutiny. The quality and precision of the fit and finish is top drawer; there are no rough edges and joints in the veneer are invisible, plus, where one material meets another the fit is extremely tight. At the front, the grill covers everything except the 4” port, the surround for which also houses the digital display. This display has a two digit LED display plus red and blue status lights which indicate the mode of running. At this point, I will note the only feature of the SW12 that actually annoyed me during it's stay. Whilst the rather bright red digits can be switched off, the yellow and blue lights can't. There is a function on the remote control that dims them by about 50%, but even so the blue light is particularly bright and I found it distracting. I did note that it seemed less obtrusive from other seating positions in the room, so it may prove less irritable to other users. Remove the substantial grill and you reveal the custom designed black anodized 12.5” alloy coned driver with a serious looking roll surround, enough for an inch of travel in either direction. The driver has a 3" voice coil, substantial cast alloy basket and including the equally uncompromising magnet, this accounts for nearly 14kg by itself. Moving to the rear, is a thoroughly different experience and it's at this point you are made aware of the custom install nature of the SW12. The range of connections encompasses stereo RCA phono and XLR connections (both in and out), a speaker level input via a 5 pin DIN socket and finally 12v trigger and digital control interfaces for the aforementioned custom installs. Whilst I didn't try it out, the SW12 has the ability to take a full range stereo input and pass it through unfettered, or high pass the signal back to a power amp. Unlike any other sub that I've seen, this high pass output can be continuously varied between 40 to 100Hz, with either a 6dB or 12dB/octave filter slope. A very comprehensive feature connections list then. If there were something I'd like to see, it would be crossover frequencies down to 25Hz, to suit the stereo only fraternity, but that really is the only thing I can think off.

After plugging in my rather lonely looking single RCA phono subwoofer cable beneath the deep finned heatsink, all of the remaining controls lie above and each is made from solid metal and operates with a silky smoothness that is lovely just to handle for the hell of it. Again, used as a humble home cinema sub, some of these functions are redundant but include all the usuals, plus the increasingly common single band of parametric EQ.

I tried the sub in a couple of positions and it ended up in the now customary position at the front of the room between the centre and front right speaker. The one main difference that really stood out during my usual process of tweaking is that in this position, which shares the same plane as the front speakers, this is the first sub I've used that needed precisely no phase adjustment. I'm not saying this will be true for all users and indeed it may have been helped by running sealed speakers, but Aerial Acoustics (or rather, Michael Kelly the designer to be precise) say they took great care to address phase coherence issues, so from my experience, I'd say it was a job very well done.

I did try the single band of PEQ and confirm that it works exactly as well as it has on other subs. That is good, but does not offer enough control to totally tame my room. As such, EQ was provided by a Velodyne SMS-1, but for those not interested in stand alone EQ, or stereo purists, the PEQ will effectively tame the worst room mode.

The only remaining control left to play with was the damping control. This works by altering the output impedance of the SW12's amplifier to deliver a variable damping factor, or if you prefer 'grip' of the driver. Less damping results in a slightly softer, warmer bass; more results in a tighter, drier performance. I tend to lean toward the latter generally and used a touch more damping for music and a touch less for movies (with a bit of added gain too), but otherwise I just tuned it's response flat and left it there. Refreshingly quick to setup then.

So to listening and as per usual, I always start with music and the class of this sub was immediately apparent in exactly the way it's character wasn't. By lack of character, I mean the way the SW12 just extended the main speakers response downward effortlessly and without fuss. It didn't make itself feel like it was separate entity doing it's own job and as a result real instruments like bass guitar maintained their own cohesive character right across their musical scale; The fast bass runs of Paul Simon's 'Diamonds on the Soles of Her Shoes' being a particularly pleasing example of this. It delivers a transparent disappearing act, that can sometimes lead you to wonder whether it's on or not. That's not to say it can't make itself felt; it does, but only when it should. The deep synth a warm bass of Dire Straits 'Private Investigations' avoided the monotonous throbbing quality that it can tease out of some subs (and plenty of speakers), whilst the damped kick drum had a very satisfying snap to the leading edge, without sounding at all thumpy and dull. The powerful drum rolls toward the climax of the track, rocketed into the room without the least hint of restraint.

Spinning up 'Ixtapa' off the eponymously titled Rodrigo y Gabriela album is a real test for musical drive. Any sluggish timing or lethargic dynamics (from the system as a whole in fact) will be exposed as the rhythm of the track is entirely driven by the frenzied plucking and strumming of strings, whilst percussion is produced from striking the bodies of the acoustic guitars. The SW12 underpinned the speakers with real bass detail and texture and the sometimes frenzied pace of the album was totally unhindered.

In musical terms, this sub is quick. This is not done by lacking actual low bass, but with an imdediacy and unbridled dynamics which start and stop exactly when they should. It's a trick that not too many subs truuly deep subs manage and shows an attention to the group delay (phase response) that all trully good music subs share. Any musical note is a complex set of frequencies over a large range and all of those frequencies have to start and stop at the same time if the sense of timing is not to smeared and slowed as a result. I must confess, that when I read that AA have implemented 3dB of inbuilt EQ to flatten out the bottom end to sub 20Hz frequencies, the mental alarm bells started ringing. I was worried that this, combined with the port tuning would cause phase shifts that would drag the very bottom end. Hats off to AA though, because in practice if there is a shift in phase, it has been manged in very a very smooth and benign way.

Onto movies and it's an unsurprisingly similar story. A presentation that doesn't make itself felt through chesty dialogue, nor grumbling along in the background. The opening scene of Children of Men, starts in a shop and exits onto the bustling, near-future, London street that was mesmerisingly realistic in it's energy and scale, the cackle of two-stroke, clatter of diesel engines and rumble of traffic attaining a scale and realism at odds with the confines of the room you are in. It made the detonation of the terrorist bomb altogether more startling as the instant transient pulses your room violently over and above what is already a loud scene. I have heard subs that will do it louder, but none that do it quite so startlingly suddenly and dramatically.

The Blu-ray of Kung-fu Panda is a lesson in seamless surround effects and being animated, need make few concessions to realism. As such, it is relentless fest of dynamic effects, that the SW12 crunches it's way through lending real visceral impact to the leading edges of punches, kicks, etc and delves down deep well into sub 20Hz infrasonic frequencies with some effects felt, rather than heard. It was a similar story with the Transformers (2007) movie with all but the very deepest effects rendered superbly underpinning the scale of the battles with relentless pounding, but again no sense that the sub bass effects were in any way separate from those comming from the speakers. There was no droning, monotonous bass rumblings, just clean LFE effects that gel with the speakers to provide a seemless soundtrack with real scale.

Now, no sub is perfect and I have heard subs that will go fractionally deeper on this disk to really wobble the room in the mid teens of Hertz. That said, they will occupy a considerably larger slice of your living room carpet too, so that ability does have a quid pro quo. If I were going to be really picky then I could also say that really high level sustaind 20Hz effects can ellicit a hint of port chuff, but this was only noticeable when sitting up close to the sub. Under most circumstances, all hell is breaking loose from the other channels making it a complete non issue and shows that I'm struggling to find anything worthy of a moan.

A number of subs have been through my room and some have proven to have some exceptional qualities, but most have had an issue or two that means when they've gone, whilst I was glad for the experience, I was happy to go back to normal life. Until now.

None, have proved so adept at blending movie bombast with musical finese, whilst occupying so little space in my room. The consistent ability to blend in so seemlessly across all program types often had me forgetting I was supposed to be listening to a subwoofer and I found myself suddenly at the end of a film I had meant to just watch a clip from, or similarly, several tracks through a CD when I intended only one. When enjoyment takes over from the actual process, then you know you are listening to something special.