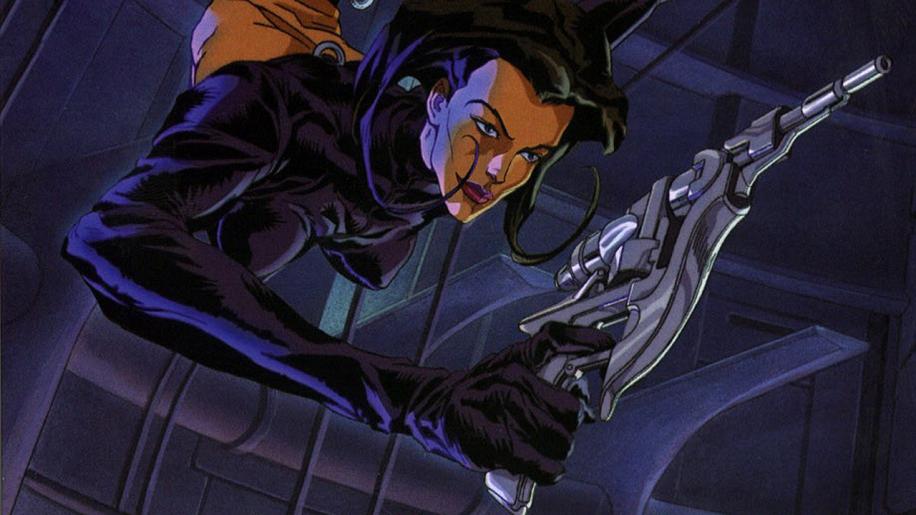 All of the Aeon Flux animated episodes are presented in their original non-anamorphic 1.33:1 aspect ratio fullscreen format. Although the main full-length series episodes have been digitally remastered for this release, the original pilot and shorts have not, only highlighting the increase in quality that comes from a little care and attention. The two remastered seasons have decent line detail, little softness and no noticeable grain. The colour scheme does not appear to have faded at all - due to the digital colour correction that has been done for the new release - and it is quite broad mainly thanks to the diverse futuristic content. Blacks are solid and there appear to be no visual defects. Overall, fans will be pleased to know that Aeon has probably never looked this good. Both seasons of Aeon Flux come complete with digitally remastered audio tracks as well, in glorious Dolby Digital 5.1. Vocals come clearly from the frontal array, from Aeon's sultry voice to the shouts and screams of her victims. The effects range from the ever-frequent gunshots and explosions, to whizzing bone-cutters, industrial machinery and various other mechanisms designed to make this show seem all the more futuristic. Overall they get broad coverage across the surrounds. The score, most notably the Aeon Flux theme, comes at you from all around and rounds off a track that gives you the impression that Aeon Flux was not commissioned over fifteen years ago. Impressive stuff. There are 7 Audio Commentaries (if you don't include the Commentaries on the Pilot and Shorts, which bring it up to 13 Commentary tracks in total)- i.e. on almost every single one of the full-length episodes - from the Creator Peter Chung and different members of the cast and crew including many of the writers involved on each episode. They talk about how the episodes were originally broadcast (the pilot was split into six two-minute sections), how they constructed the sound effects and score, the character they were trying to build in Aeon - a secret operatives with no ties and almost no morals - and the reasoning behind creating this whole Aeon universe. They discuss the action and the drama and also go into detail on topics like Aeon's revealing costume (and how it was designed that way because the original episodes had no vocals and Aeon's body had to express more). Each episode is talked about in detail, with many things that will confuse audiences visually now given aural justification and - occasionally - very revealing insights. Overall, with interesting and informative commentaries by Chung et al. on almost every single episode, including the Pilot and shorts, we already have extras that - alone - make this set worth purchasing.

Investigation: The History of Aeon Flux is a seventeen minute Documentary that looks are the character, the stories and their evolution. It all started with MTV and Liquid Television, who commissioned Peter Chung to do a new animated series for them. Chung was working on Rugrats at the time and wanted to spread out into a different direction with characters who could do more than just crawl around - and so Aeon Flux was born. We get lots of interviews with the Production Crew involved, most notably Chung himself (who briefly notes some of the work he did to 'enhance' the episodes) as well as plenty of revealing behind the scenes sequences - storyboards, production art and stills - it all looks great. We also get to hear from the woman behind the voice of Aeon herself, Denise Poirier. Fans of the character and the series will simply love and lap up the background information that is packed into this interesting Featurette.

The Deviant Devices of Aeon Flux spends six minutes looking at the various weapons and gadget she uses. Narrated by Aeon herself, she talks about each gun in turn, discussing the ammunition they use, their advantages and disadvantages and so forth. It is interesting, occasionally tongue-in-cheek and extremely well conceived.

There is a section dedicated to the Production Art, where we get to inspect Sketches, Model Sheets, Storyboards (which are pretty accurate), Colour Stills and Pencils tests (for two of the short episodes: War and Mirror).

There are samples for Other Works by Peter Chung, including the MTV Loaded Promo, the Aeon Flux CD-ROM Commercial and the Honde Coupe Mission, all done in Chung's inimitable style.

Finally we get some of the original Liquid Television Shorts, including The Adventures of Thomas and Nardo, The Art School Girls of Doom, Invisible Hands and a couple of untitled other shorts. Fans of Liquid Television will note that there are quite a few interesting series omitted here, but will still appreciate the taster. Aeon Flux is a fairly mature animated TV series with plenty of action, weird science and deviant human behaviour, which follows the top secret exploits of a sexy, underdressed, kick-ass anti-heroine femme fatale. She's like Catwoman except with two guns and an even sexier and skimpier outfit. What more could you want? It is clear from the contents of these discs why the show has achieved such cult status. The video and audio presentations give you Aeon in the best shape you have ever had and the wealth of extras should both please fans and entice newcomers. Highly recommended.