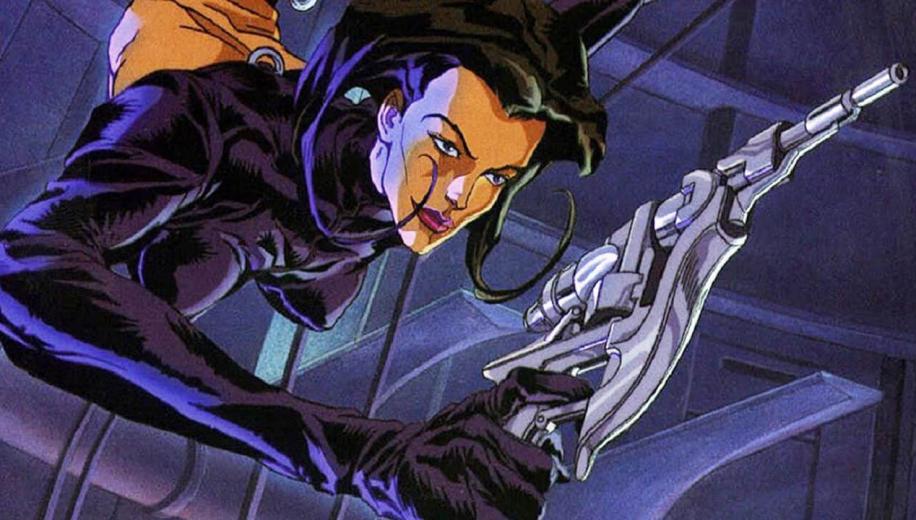 Aeon Flux came into existence through MTV's Liquid Television series, where three-minute animated shorts were shown as a part of a half-an-hour show. Pretty soon Aeon Flux became something of a cult classic, becoming the main reason why people would tune in to watch Liquid Television. Its popularity resulted in two seasons being commissioned, each consisting of five full-length episodes and giving it much wider coverage. Increasingly intricate and sinister, the episodes paved the way for a movie tie-in, which has come to fruition with the new Charlize Theron live action feature film. The film tries its best to suit all purposes, staying vaguely true to the original material in attempt to please fans, having a standalone story that audiences will cope with and also pandering to Hollywood's clichéd whims, like having pointless revenge subplots and defining the lines between good and bad much more clearly than the original material ever did. Now, however, we also get the opportunity to revisit Aeon's animated adventures in this lavish DVD box set that includes the pilot, the original animated shorts and both seasons of episodes. Prepare for Aeon Flux: The Complete Animated Series.

Four hundred years in the future and the last remaining members of humanity live behind the tall walls of the seemingly idyllic utopia that is Bregna, protected from the deadly jungle growing beyond that has apparently engulfed the rest of the planet. Bregna is run by a government - run by the eccentric Chairman Trevor Goodchild - that believe they provide a perfect life for its inhabitants, structured and regimental and, above all, monitored. Its population are fed a strict diet of propaganda, fooling the majority into believing that their lives really are this perfect, but an elite few have rebelled against the Bregna republic. These freedom fighters - the Monicans - wish to break out of the confines of this establishment and free the minds of the automatons under their control. The woman on the frontline of this rebellion is their best secret agent: Aeon Flux.

This set presents the two full-length episodic seasons of Aeon Flux as being the main feature, with the pilot and shorts merely extras on the third disc, but I am going to review them first because I think they are integral to Aeon's history. Although they are fairly brief and contain little to no dialogue (Aeon herself shouts and screams but only actually says about one coherent word), they still give you a good idea as to what she is all about. The pilot sees her slaughter her way through dozens of Bregnan security guards on a mission to assassinate a political figurehead and the rest of the shorts offer similar themes, with Aeon desperately trying to prevent the destruction of a research facility, infiltrating various high security areas - including an alien spacecraft - and engaged in a massive all-out war between the Monican rebels and the Bregnan soldiers. Her loyalties are clearly painted as dubious (as is her sexuality) particularly since she spends every episode dressed in ludicrously revealing black PVC S&M gear and often consorting with the supposed enemy. Dark, deviant, sexy and action-packed, this is what Aeon is all about.

For the full-length episodes, Creator Peter Chung decided to add many more layers to his animated action-adventure, with Aeon much more directed in her industrial espionage and sabotage missions against the Bregnan Republic. Across the two seasons we see her uncover plenty of strange secrets locked behind the seemingly impregnable walls of Bregna, from winged Archangels to naturally hallucinatory creatures, lethal childlike demigods to elaborate cloning facilities. She foils a complex political ruse to control senior governmental figures, tries to prevent criminal-reforming brainwashing schemes from taking place and even travels into a very bleak future.

Over the course of the ten episodes we also see her uneasy love/hate relationship with Bregnan Chairman Trevor Goodchild evolve. Whenever they meet, they seem torn between killing or colluding with one another - a situation never more evident than in my personal favourite episode: A Last Time for Everything, where Trevor's cloning schemes allow his deviant dreams to almost come true. It means that double-crosses are rife and only adds to the twist-and-turn nature of the narrative. Chung not only develops the love theme but also drops his fatalistic approach established in the original shorts (where Aeon dies at the end of every episode, implying that she is just a multi-cloned operative - something confirmed at the end of the pilot) and instead Chung adopts complex stories, engulfing political subplots and general surrealism (although sometimes this appears to be designed to confuse more than intrigue).

It is also worth noting that Chung has revisited and reedited some of these episodes, allegedly in an attempt not only to polish them up but also to make them more coherent. Personally, I did not really notice much difference.

All in all, Aeon Flux is thoroughly absorbing viewing. You never appear to know what is going to happen next, who is going to betray who, nor entirely know what is actually going on but this, stylish, action-packed, futuristic animation, with its violent and sexy central character will simply never leave you bored. If you've never seen the MTV show on TV, or even encountered the character at all (but for the mixed-bag movie adaptation) then you really should check out this wonderful collection. Fans should already have it in their shopping baskets.